With the rise of independent developers, there's no shortage of side-scrolling RPG adventures out there on the PS4. After playing a lot of them, it's easy to pass over the next one that comes along. That's why it's incredibly important to stand out from the pack.

Wuppo stands out with a colorful hand-drawn art style and the promise of whacky adventures in a world oozing with charm and humor. Does it channel these things to create a modern classic? Time to find out!

A Colorful and Charming World With Surprising Depth

Wuppo starts out by throwing you directly into its world. Without any background information, we are introduced to our little Wum. He's a white ball with tiny legs and a surprisingly expressive face consisting of two small eyes and a mouth.

The opening conversation of the game between yourself and the Wum running the front desk in the apartment building you live in (known as the Wumhouse) sets the games hilarious tone.

Your dialogue choices allow you to progress the conversation fairly normally, or if you're feeling devious, you can troll the front desk worker by playing dumb.

The game's dialogue appears in speech boxes, but it often employs color, animated text, or caps to add an expressive nature to each conversation. Furthermore, your Wum will "speak" by moving his mouth and making clicking noises to match your dialogue choice.

Between the surprisingly expressive facial animation and the dynamic text dialogue, Wuppo's conversations come across as hilarious and unpredictable almost every time.

While your initial task involves trying (and failing) to get ice cream back to your room without making a mess, Wuppo quickly evolves into a journey across its strange and in-depth world to find a new home, and perhaps become a hero in the process.

The story is delivered mostly through dialogue, but the sharp writing and animated text delivery make each encounter with characters feel unique from the last. While there's no voice acting, I still felt like each character I came across had a "voice" in the way their dialogue was presented.

You'll also find film strips that you can bring back to a character you meet early on and use his projector. These are short stories that flesh out the history of the world and the races that inhabit it, Wums being one of them.

You'll encounter members of these other races in your journey, and they each have their own personality and motivations. For example, an early race you encounter is a simple and primitive people who won't attack you unless you show aggression first. '

The film strips add a solid amount of lore and backstory to the world of Wuppo. It was more story that I expected, and entirely welcome. It balances the funny and exciting moment-to-moment gameplay with a strong foundation of the characters and events happening in the present.

The exceptional and witty writing combines with absolutely charming and hilarious delivery to tell a story that is equal parts interesting and entertaining. I hesitate to make comparisons in my reviews, but I think perhaps the highest compliment I can pay Wuppo's storytelling, is to liken it to that of Paper Mario.

Much like Paper Mario games, Wuppo manages to create a charming and convincing world and populates it with characters who are expressive and unique without them every "speaking" a word. Instead, it's the clever delivery of story that gives the game its unique personality. 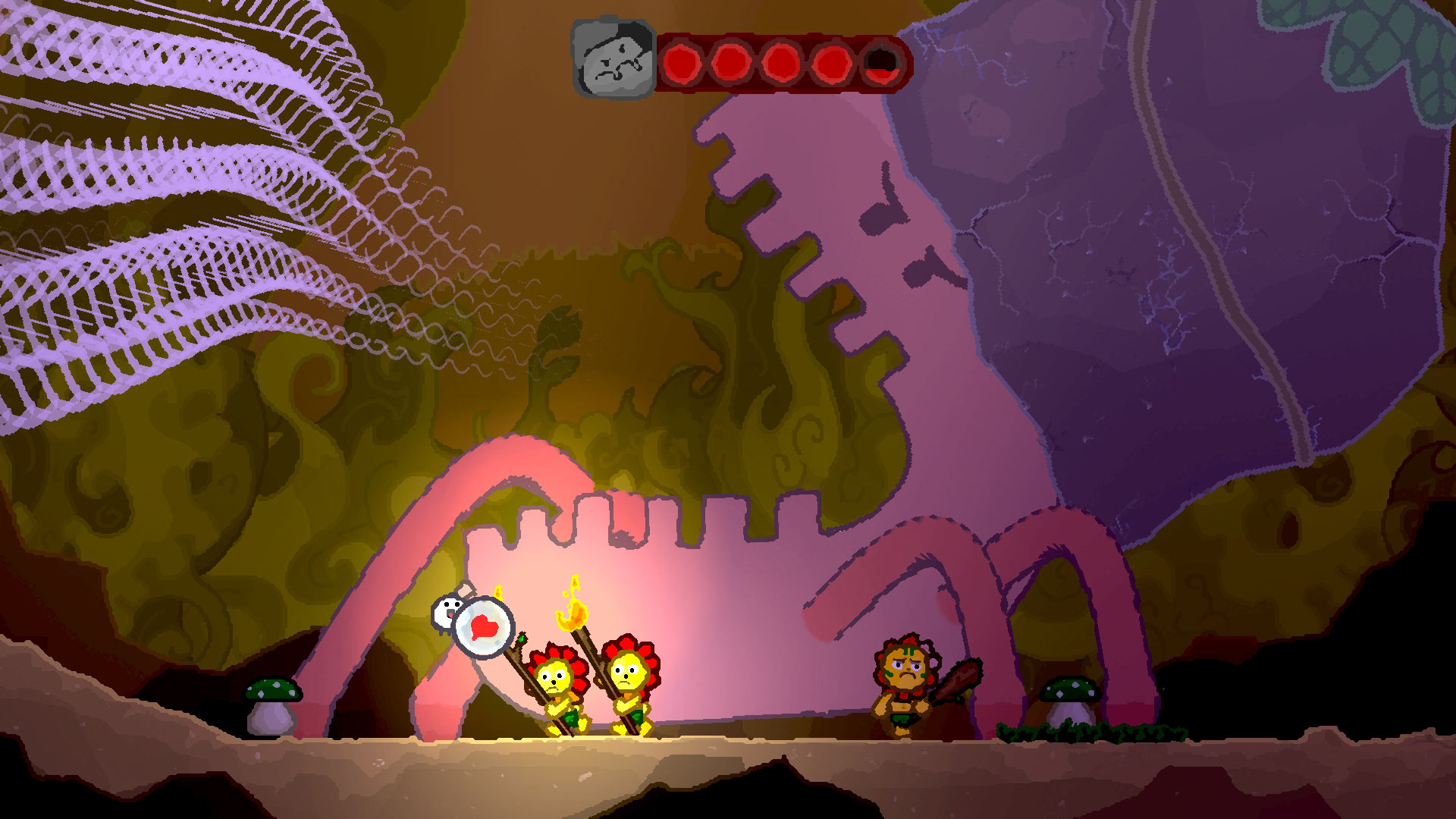 On the surface, Wuppo may seem like a simple little game, but it's hardly lacking in challenge. In fact, multiple difficulty levels will ensure you hit the amount of resistance you're looking for in this type of game.

The first portion of the game involves light puzzles and platforming through colorful and open environments. You'll face several bosses in fairly quick succession during these early hours.

Your initial weapon is rapid fire gun that shoots blasts of various colors through the air. Simple twin-stick controls make it easy to move and fire at the same time.

Bosses each have their own unique patterns and attacks. Higher difficulties will be less forgiving, taking huge chunks of health if you don't dodge properly.

Standard enemies and environments are less challenging, but do require some degree of platforming skills to maneuver successfully. You'll find shops where you can spend coins you've earned to buy health items, cosmetic changes, or upgrades.

Other weapons do become options as well when you progress past the opening area. As the game continues, you'll soon be faced with more puzzles that involve wearing disguises to enter certain areas and complete objectives.

This is layered with side activities and options that slowly raise your maximum health (including the collecting and playing of film strips). It's within these activities where Wuppo opens up in a way that was both exciting and frustrating for me.

On the one hand, I liked the freedom to explore at my own pace. Finding secrets and discovering new opportunities was always fun. On the other hand, Wuppo did very little to provide me with any direction.

This resulted in moments where I aimlessly wandered through areas seeking some kind of hint or suggestion as to what I should do next. Vague objectives are offered, but otherwise, the game does very little to hold your hand.

Again, I would prefer this over a painfully linear experience, but I do believe there is something to be said about a balance between the two. Despite this minor frustrating, I could never truly get mad at Wuppo. For every moment of lost frustration, a conversation with another character would plaster a smile on my face. 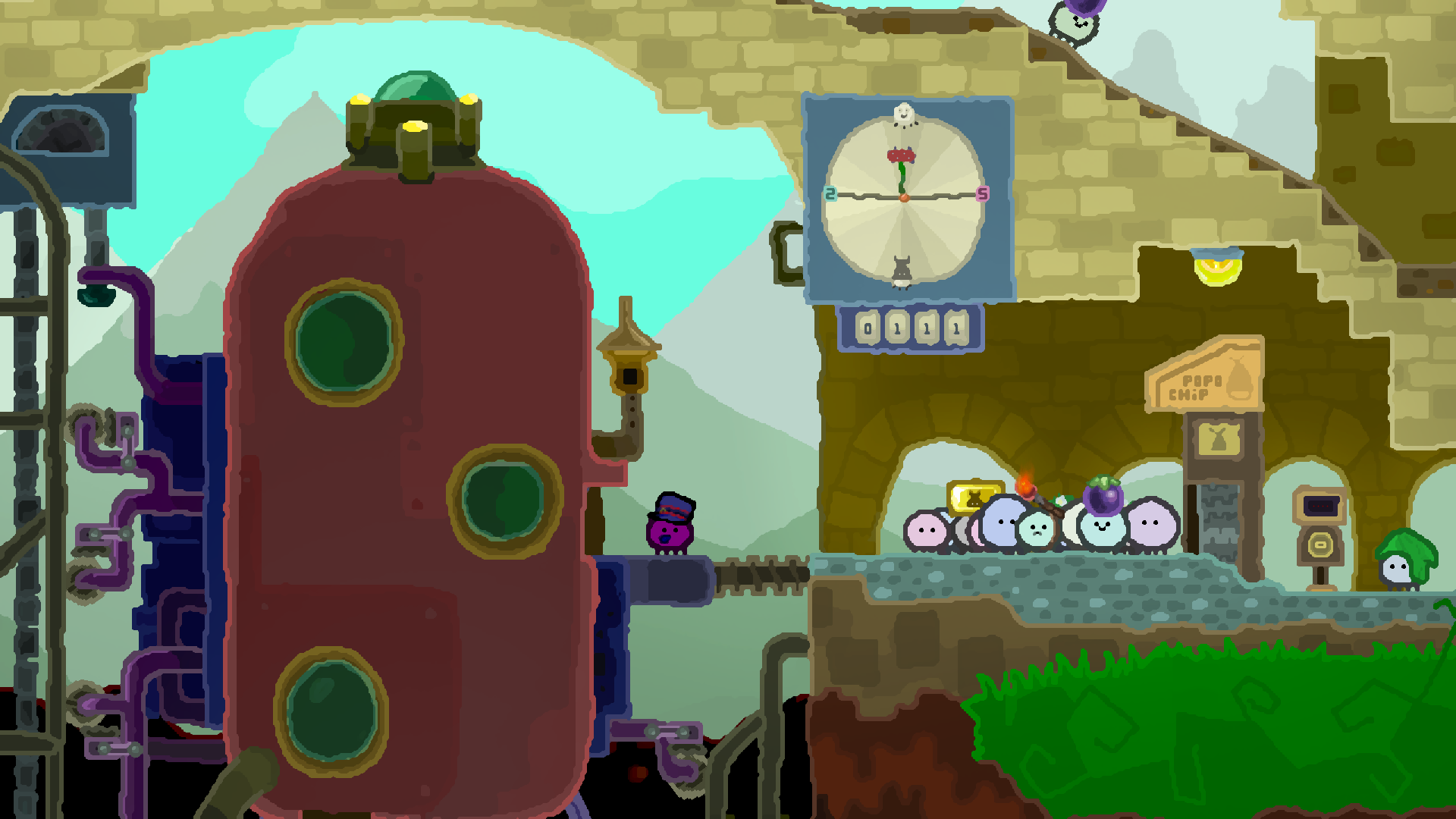 The entire world of Wuppo is absolutely gushing with color. The hand-drawn visuals offer a timeless art style that looks great and will most certainly age well.

The beady little eyes and mouth of our Wum character offer some extremely expressive animation, which is combined with dynamic and animated dialogue text to great effect.

It's a very polished presentation that could easily stand with the other great side-scrolling adventures in Nintendo's catalog. The same can be said about the soundtrack.

Playful melodies mix with upbeat piano tracks and woodwinds for an upbeat and catchy pairing with the game's humor and visuals. It's really hard to imagine that such a clever and polished experience was made by two people, but it's true.

I really enjoyed my time with Wuppo. It captures that same magical charm that countless other games in the genre have tried and failed to replicate. It's got a wonderful story, solid gameplay, and a timeless presentation.

While it did frustrate me at times with its lack of solid direction, I spent the vast majority of my time with Wuppo smiling along with my inner child. It's a hidden gem that is well worth your time.

A copy of Wuppo was provided to PS4 Experts for review purposes. Version was tested and reviewed on a PS4 Pro.