The Incredible Adventures of Van Helsing is a solid action RPG series for PS4 that spans across three games and offers up a rich gothic fantasy world to explore. The creature designs, and sharp writing were some of my favorite elements, but one thing I didn’t expect to enjoy was the tower defense minigame it included.

World of Van Helsing: Deathtrap takes this tower defense concept and expands it into a full spin-off for PS4 that combines both strategic planning with intense real-time action combat. Set in the same rich universe, does this combination work, or is this game a trap for your wallet? Let’s find out.

Tower Defense With an ARPG Twist

The World of Van Helsing: Deathtrap, places you in a realm beyond the main world of the trilogy, a place referred to as the ink. It is here that monsters and horrors spill out from the void and it’s up to you to keep them at bay. To do this, you will journey to ancient strongholds filled with mystical traps that can aid you in your quest.

The story here pulls from the main trilogy’s lore, but the majority of your information is relegated to text before each level, so don’t expect a deep dive into the story or the world here. I’m always up for a good tale regardless of the genre, but being that this is a tower defense hybrid, I expected a certain level of focus on the gameplay, so the lack of a deeper story isn’t too surprising, but worth mentioning.

In terms of the gameplay, World of Van Helsing: Deathtrap keeps the action RPG gameplay you’ve come to expect, with basic attacks and special abilities that differ based on your chosen class, of which there are three: mercenary, sorceress, and marksman. I played as the sorceress myself, but each of them have their own strengths and weaknesses. The marksman and sorceress, for example, excel in range but aren’t as adept in close quarters like the mercenary can be. In any case, you’ll want to rely on your traps first and foremost.

The on-foot combat works just as well as any other ARPG, though some of the attacks lack the bite you would expect in terms of the animation and the impact on enemies. That’s not to say there’s not a lot of action on screen, but it would have been nice to see more reactive animations and bombastic effects from some of the more powerful abilities.

When you’re not running damage control on foot, your traps in Deathtrap will be the true star of the show. As with any tower defense game, the enemies will move on a predetermined path through the level, and during later waves will move across multiple paths simultaneously towards a portal. Your objective, of course, is to make sure they never reach said portal.

Interestingly, when you’re engaging enemies yourself, they will break away from this path to come attack you directly. This caught me off guard the first time because I expected the enemies to ignore my attacks and focus on their march forward. This is one example of how the hybrid approach between tower defense and ARPG creates some interesting new mechanics.

Traps are purchased with essence, which you earn from finishing waves and scoring kills. The sorceress also has a starting skill that enhances the amount of essence you get from kills with a specific trap, so there are options to increase your output.

The trap locations are designated on the map and offer choices based on which type they are. Towers are easy to spot and allow you to deploy things like automated turrets and orbs that shoot lightning at passers by. Other ground-based traps offer things like acid clouds or fire pits. The traps get creative too, going so far as to offer the ability to summon beasts of your own in that space to emerge and tear through enemies.

All of this is fueled by an upgrade system that spans across both your character and the traps themselves. You are able to spend skill points into passive and active abilities, with new tiers unlocking at certain levels. Equipment like weapons and armor also drop for you to equip, and while there’s a crafting system in place, I didn’t find myself using it very often.

Traps themselves also offer both passive upgrades and tiered upgrades that give you the opportunity to upgrade them throughout the course of a level. While World of Van Helsing: Deathtrap offers co-op, it’s sadly not of the local variety (which would have been a nice addition).

Instead, there are online options for players to work together or compete against one another as one controls the enemies. The single player will give you a solid amount of gameplay, and scenarios unlock to further test your skills beside the several difficulty settings. For the price point, it feels like a solid amount of content, especially if you have friends to play online with.

The game would have more legs for more if it offered local co-op as it’s the perfect way to quickly enjoy some interesting and challenging gameplay. As it stands, fans of tower defense should absolutely check it out as its a solid entry in the genre. Those who are fans of the main trilogy and want more of that classic gameplay should also find a lot to like here, even if the story doesn’t add much to the universe.

A Unique Style Wrapped in a Serviceable Presentation 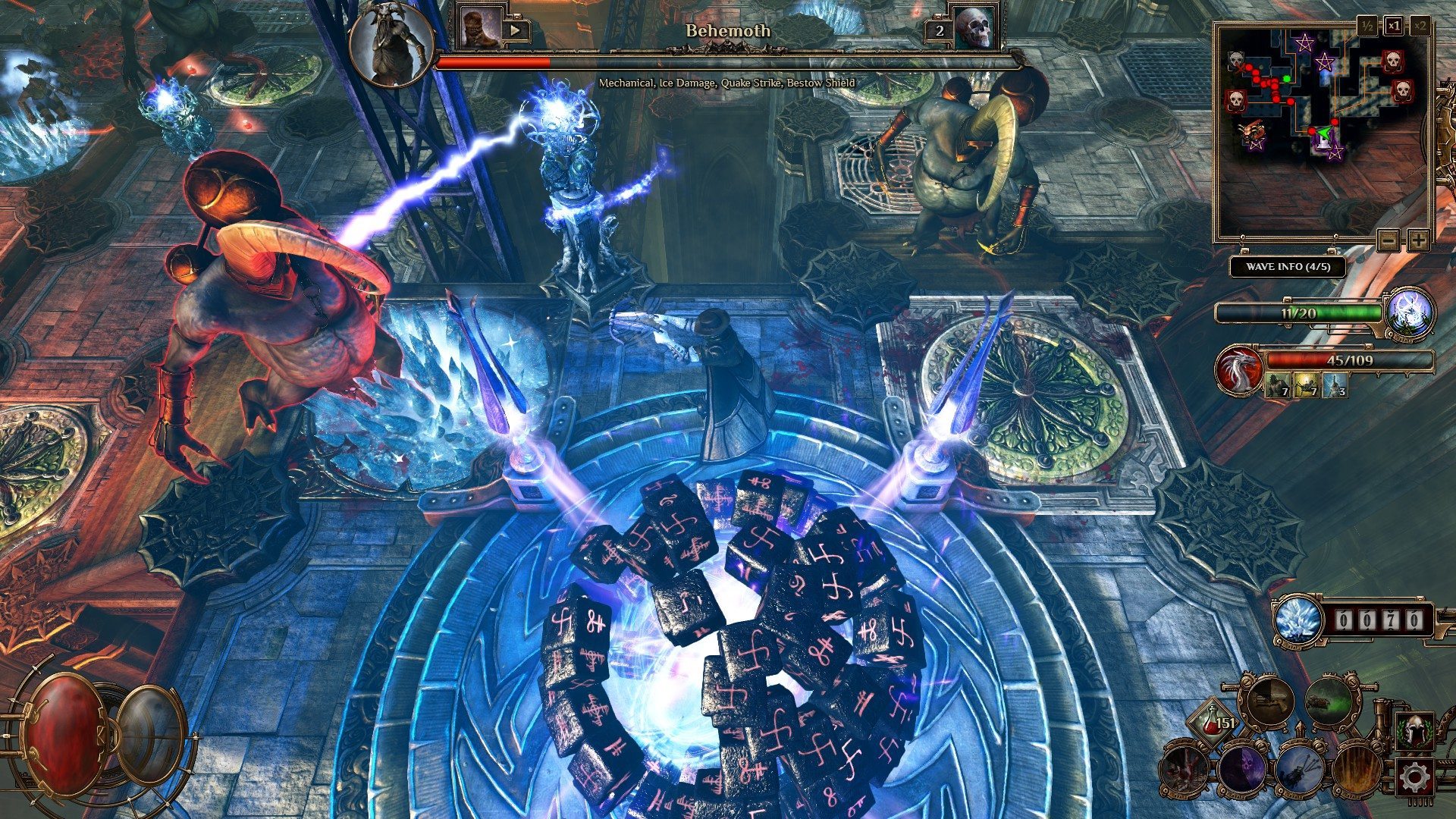 World of Van Helsing: Deathtrap offers several modes on PS4 Pro ranging from 4K to a balance and a 1080p performance mode. Like the other Van Helsing ports, playing on anything but the performance mode at 1080p feels inconsistent and doesn’t look different enough to sacrifice the smoother frame rate. While I’m happy to see Deathtrap make its way to PS4, the game’s origins as a PC game from 2015 are certainly showing.

The art does a lot to keep things visually appealing, but on the cusp of the next generation, the graphics and presentation leave a bit to be desired. The UI is also worth noting as everything is incredibly small on a big screen TV. Playing on a monitor I imagine would not cause any issues, but sitting on a couch across the room made me wish for larger text and UI elements across the board.

While it may not set the genre on fire, World of Van Helsing: Deathtrap is a fun romp for fans of tower defense and offers up some interesting elements that tie into the familiar gameplay from the main ARPG trilogy. Fans of either will enjoy this take on the concept, and online multiplayer only sweetens the deal if you have friends to play with.

A copy of World of Van Helsing: Deathtrap was provided to PS4 Experts for review purposes.