As someone who loves cooperative games, I know it can be a hard sell when a game requires two copies and only offers online co-op. I love split-screen as much as the next person, but there’s something special about having the whole screen to yourself. In the case of We Were Here Together, that last part is the entire point.

The We Were Here Series has made its way to PS4, with all three games now available. For this review, I played the third game in the series, We Were Here Together, with a friend of mine several states away. We joked, we cooperated, and we argued, but in the end was it all worth it? Let’s find out.

An Uneven Experience That Requires Communication and Patience Above All Else

The concept of a puzzle game that separates the players and requires them to communicate via walkie-talkies is something that intrigued me. I knew it would put communication skills to the test, but the reality was even more difficult than I anticipated. It’s not that the puzzles themselves are especially difficult (though they are challenging). It’s the struggle of conveying the right information at the right time that proves to be your true nemesis.

While We Were Here Together does have a light story involving two explorers who set out to rescue someone after picking up a distress signal in the first chapter, there’s not to keep you motivated across the ten chapters. As someone who loves puzzle games that fuse story with the mechanics themselves and the environment, I missed this element of the experience as I wandered the admittedly interesting environments.

This puts the majority of the entertainment on the puzzles themselves (though you can have some fun with the in-game communication system). One thing I will say is that communicating via walkie-talkie is fun and immersive at first, but we soon found ourselves using the party chat, if only to avoid cutting each other off, something that has become a bad habit of mine in a world where Zoom calls replace in-person meetings. While the game’s first chapter has you together for a few puzzles, you’re quickly separated at the beginning of the second chapter.

In the first chapter, I could run to where my partner was to get a look at their side of a puzzle, but all of this goes out the window when you’re separated. Where he would struggle with something, we could swap places or I could come see what he was confused about, but once you’re apart, you really have to become excellent at describing your surroundings and the mechanisms of what you’re seeing.

To be fair, the game provides this kind of signposting in the environment, whether its symbols, colors, or words that you can use to help your communication, but when you’re dealing with something like levers or switches that have multiple outcomes, your conversations can get tangled pretty quickly.

For some, this will create frustration. For others, it will simply elevate the challenge and sweeten the prize. I feel somewhere in between. My friend and I are not puzzle game experts, so we brought in our better halves to assist in the efforts, which helped to be sure.

This didn’t stop us from hitting roadblocks, however, and frustration set in when I struggled to understand what he meant, or I felt like he wasn’t truly doing what I asked (not his fault mind you). This is where the premise starts to show some cracks. The problem becomes worse too when you think about how this was originally a PC game, and the controls for some of the puzzles don’t translate as well to a controller.

The menus themselves, while serviceable, don’t offer much in the way of user-friendly design. I also noticed that the game did not save partially through chapters unless we hit specific checkpoints that could be few and far between. With the orchestration needed to find time for both parties to get on and play, it would have been nice to have a manual save system that respects the player’s time.

While I understand the game could not work in a split-screen type of setup, I do wish there was some sort of system to communicate visually with the other player. For example, it would be awesome if there were an in-game camera with limited film that you could use to take a screenshot and display it for your partner.

That way, when you hit a roadblock and your communication fails you, you can fall back on this as a backup so you don’t end up shouting at each other over your mics. To this same point, a hint system for each player would have been nice if you spend a certain amount of time on a puzzle. This could even be directed to each player as well, giving them a prompt or nudge that they could say to their partner to kickstart the creative thinking process.

Some of these quality-of-life elements could have helped the experience feel more accessible and alleviate the very real potential of issues with communication. The fact that the game allows you to pair with a random player boggles my mind, for example, but if these types of things were available it could make the experience of playing with someone you don’t know less daunting.

When it comes down to it, We Were Here Together presents an intriguing premise for a puzzle game, but beyond some interesting environments and challenging puzzles, it doesn’t capitalize on this opportunity, nor does it provide elements to smooth out potential wrinkles or obstacles in the gameplay.

As a result, it ends up feeling like a missed opportunity, and the clunkiness that comes with translating PC/Mouse controls to a controller only serves to exacerbate that problem. Given the right friend or significant other, it could be a fun, if simple experience, but with some additional features and polish it could have been a lot more. 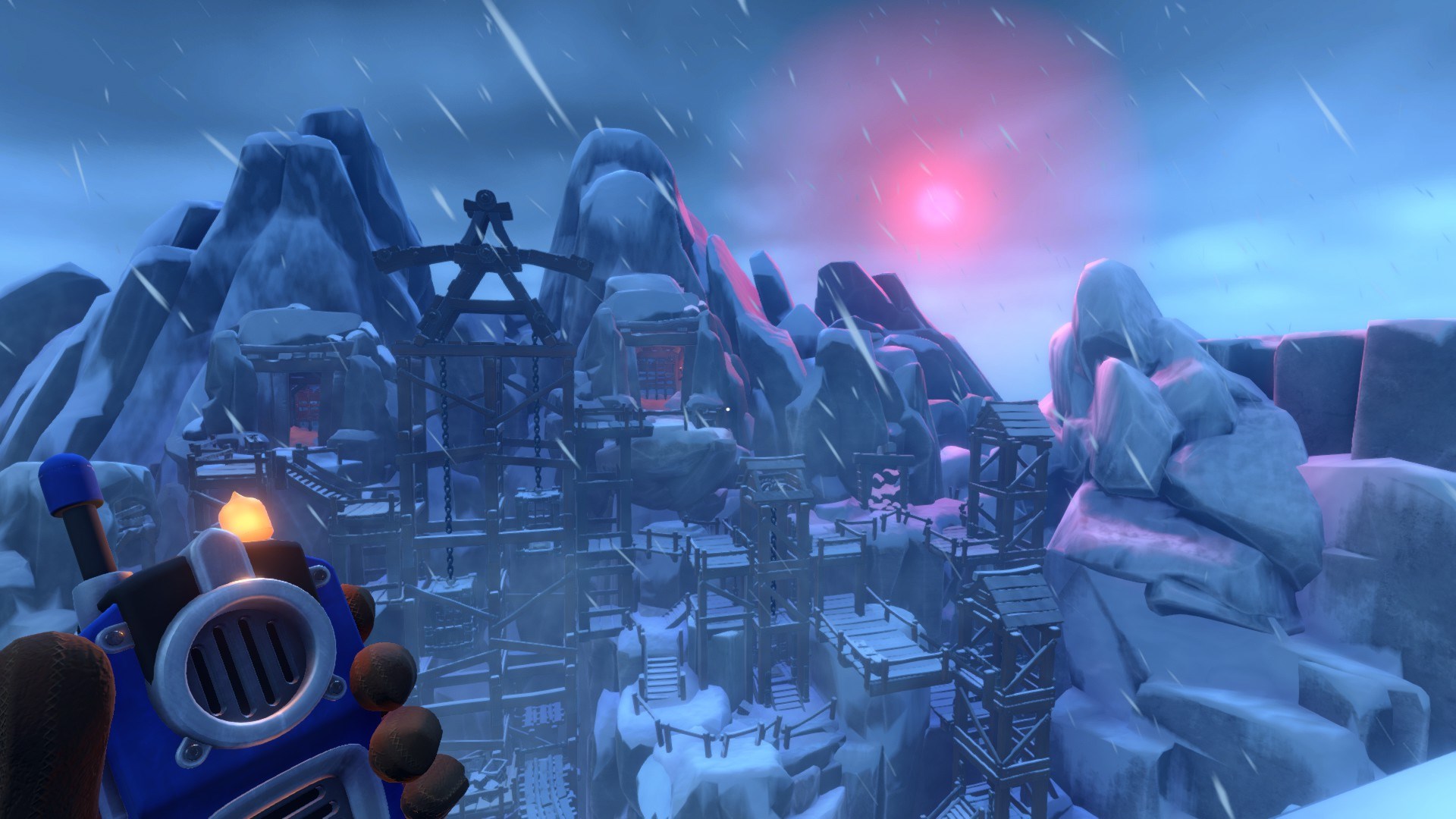 From a presentation standpoint, We Were Here Together’s user interface and controls often reflect its roots as a PC title. You don’t use the menus often, but when you do they are not sized very well for a full-screen TV, and manipulating specific mechanisms can be difficult with a controller during certain puzzles.

Load times can also stretch on longer than you would expect, but the experience as a whole runs smoothly in motion. While I enjoyed the walkie-talkie mechanic at first, we soon decided to switch over to party chat, so despite the immersion it adds, it’s not something you may use throughout the adventure.

We Were Here Together, and the series as a whole has a very good idea going for it. With the right people, and ideally people playing in the same household, you could get around some of the obstacles and frustrations with being separated and trying to communicate everything to the other player.

If you’re playing with someone very far away, and the communication isn’t spot-on, the lack of any qualify of life or assistance tools in the game itself could bring about more frustration than fun, but you’re mileage will vary based on those factors.

All-in-all, I think We Were Here Together is a solid romp for puzzle fans with a partner in crime, but everyone else should weigh the options before putting your puzzling and, by extension, your communication skills to the test.

Two copies of We Were Here Together were provided to PS4 Experts for review purposes.