When you first see Vertical Drop Heroes HD, you would be forgiven for thinking that it's the next title from the developers who brought us cooperative brawlers like Castle Crashers and Battleblock Theater, but you would actually be mistaken.

This 2D roguelike is actually an HD remake of a game that originally found its success as a browser-based experience. Developed by a one-man team, this procedural RPG gives off a great first impression. Does this game descend straight into your heart, or does it tumble into the abyss? Join us as we find out!

Countless Heroes Will Fall, But One Shall Rise

Vertical Drop Heroes HD gives you a short text introduction that sets up the premise. There's a prophecy that tells of a hero who will conquer the challenges ahead and, ultimately, discover the secret behind the game.

This is a story about that hero, but it's also a story about all the heroes who thought they were the one from the prophecy and were fatally mistaken in that assumption.

It's a funny tongue-in-cheek tone that leads right into the experience. You can play either by yourself, or with split-screen co-op enabled. If your player 2 isn't in the room, you can even rock some online cooperative play as well.

It's nice to see a game offer so many options for multiplayer. My significant other and I love to play games together, so we were super pumped when we find out Vertical Drop Heroes HD offered this option for couch co-op.

When you set up your game, you'll choose from randomly generated heroes, each with a set of skills you can upgrade and utilize in your journey. The levels themselves are also generated randomly, giving the game a fresh feel every time you dive in.

As you explore, you'll naturally descend vertically through the environments. Platforming combines with simple, but satisfying combat as you uncover shrines, upgrades, and keys to unlock various obstacles and cages in the level.

It's always fun to unleash an NPC from a cage and watch them wreak havoc on the enemies that were once tormenting you. At the bottom of each level, you'll find a boss that gives you a run for your money.

Death in cooperative play will keep you out of the game until the next level, and losing both players will take you right back to the main menu, but you'll have a new crop of heroes to choose from.

You've probably seen everything Vertical Drop Heroes HD has to offer, and you could argue that you've seen it in better forms of the years. That doesn't make this a bad game, however.

Without the inclusion of cooperative play, Vertical Drop Heroes HD would lose a lot of its shelf life, but this smart addition, in conjunction with the simple, but fun gameplay, makes it a great game to boot up for parties or a quick action romp. 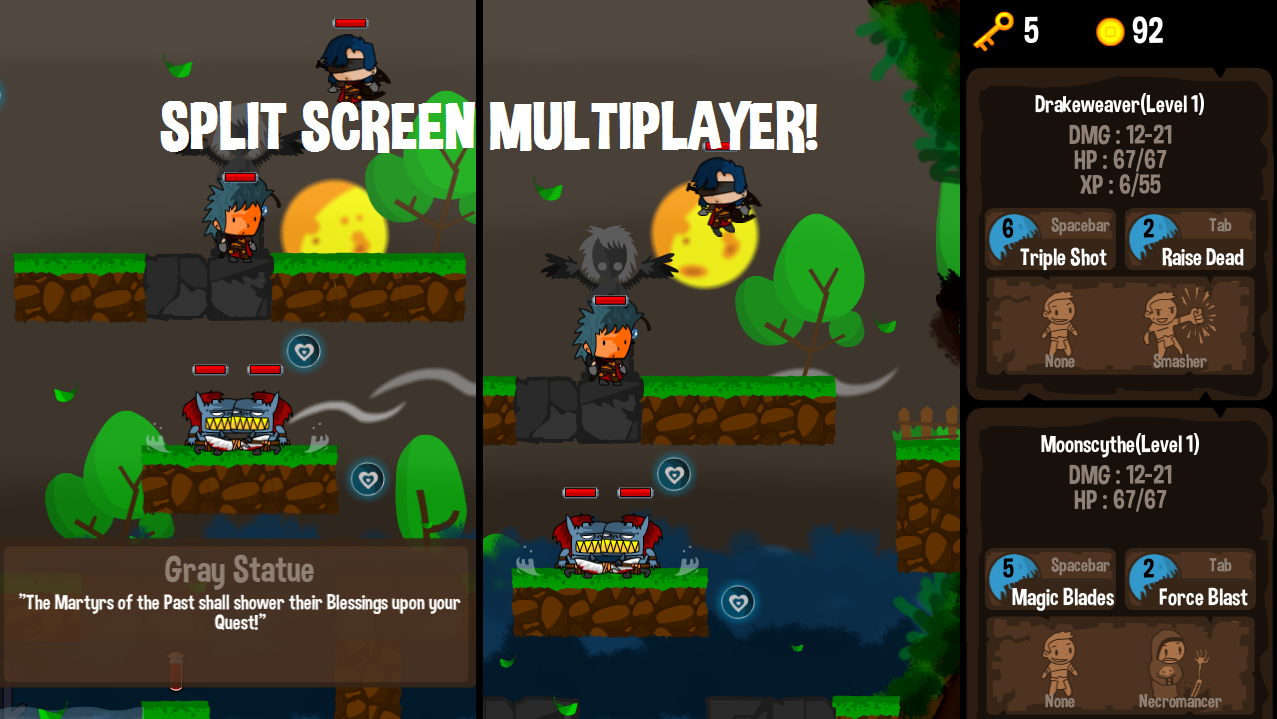 The visuals in Vertical Drop Heroes HD are a sharp and colorful hand-drawn palette that helps it stand out from the other pixel-based roguelikes we've seen in recent years on PS4.

The smooth frame rate and vertical split-screen all work great for the presentation. Combine this with a smart and affordable price point, and you've got yourself a simple, fun, and most importantly, highly cooperative action game.

In a world where couch co-op is far too difficult to come by, I welcome a game like Vertical Drop Heroes HD with open arms, and you should too.