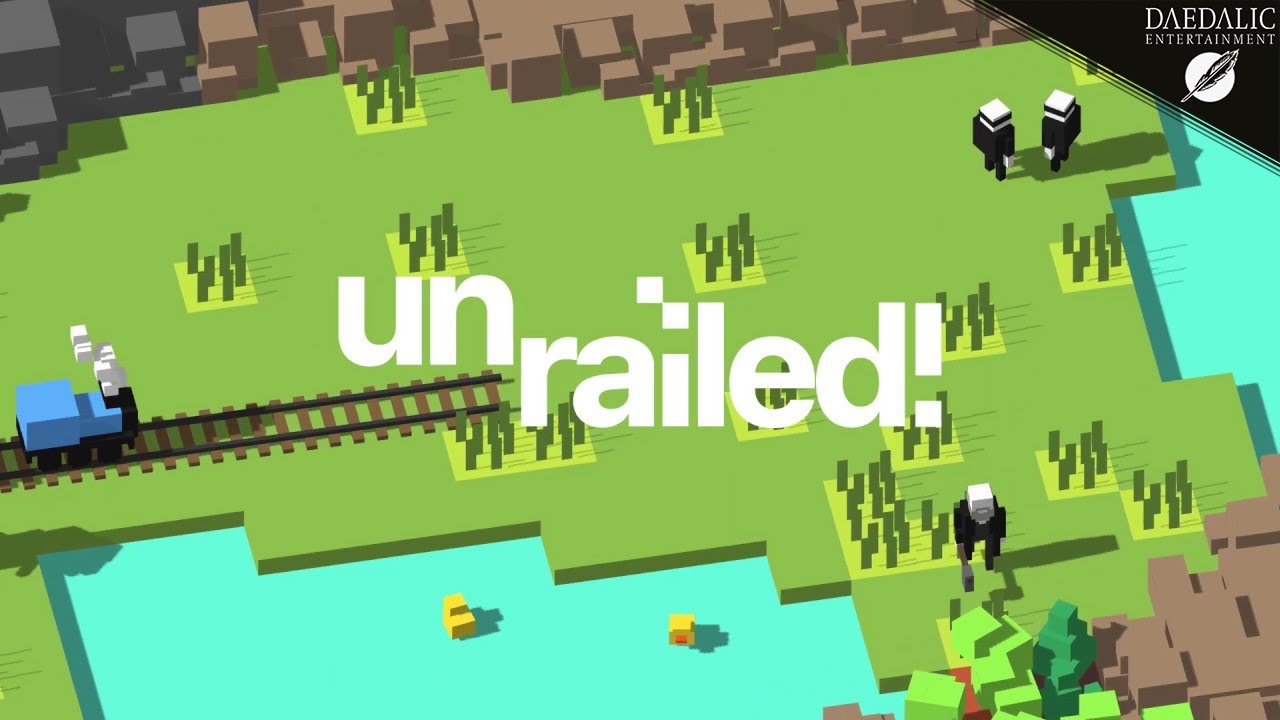 Gaming as a medium seems to be limitless in its creativity. Just when you think every idea has been done before, a game like Unrailed! comes along and sends you for a loop. In this clever cooperative game (it also includes a versus mode), you’ll need to craft and build train tracks through varying environments while the train is moving!

It’s a fiendishly unique idea, but does this concept have legs, or does the track run out before this train can really get rolling? Let’s find out.

A Unique Concept, but Your Mileage May Vary (Literally)

The concept of Unrailed! is simple, but it has surprising depth and replayability as you dig into it. Your goal is to gather resources and craft train tracks or bridges with the goal of guiding a moving train as far as you can across procedurally generated environments that span from a standard palette, to the wild west, and even snowy tundras.

The game’s menu is slick and simple, allowing you to choose options by walking over to them as your chosen character. There’s no story mode or campaign to speak of, instead the game offers a few different modes to choose from. Endless is what it sounds like, tasking you with keeping your train going as long as possible.

The ability to store a single save and load it once helps here for those runs that last a long while. This was by far my favorite mode, but another mode task you with reaching a station as quickly as possible (the trains zooms to the station once a path is fully formed). The versus mode pits two players against each other on separate versions of the same map, and allows you to sabotage them with a cannon car on the train.

Finally, a sandbox mode lets you experiment with unlocked train upgrades and new cars, which is in service to getting better at the versus or cooperative modes. While Unrailed! is playable in a single player mode, the game is at its best with a local team or playing online.

That being said, the single player and 2-player versus offers an AI bot that can be given instructions and is immensely helpful in making a single player feel like a decent option. Issuing more complex tasks to the bot requires you to play pathing and I rarely used this because it felt clunky to lay out the directions and it wasted valuable time. I usually left the bot to harvest resources for me.

The sweet spot for me was the 2-player local co-op with my resident Player 2, Christina. We had a blast frantically gathering wood, mining iron, and throwing it all into the crafting car on the train so it could make more track pieces.

On top of this, a water bucket must be filled up and used to fill the stores on one of the base train cars. When it runs out, things catch on fire and require multiple trips to the local water source. Fire doesn’t cause permanent damage, but it does stop anything from functioning until its dealt with.

The train moves at a slow, but deliberate pace until you reach stations that allow you to spend gold bolts to upgrade or add new cars to your train. The train itself gets a little faster each time as well, but even at the default speed, you can quickly find yourself in trouble if you’re not moving tools along with the map and harvesting resources constantly.

Gold bolts for upgrades are awarded for reaching stations but can also be found in the environment and as rewards for completing tasks that appear, like stacking 20 pieces of a resource or keeping your crafting cart busy for 15+ seconds.

The upgrades are useful and tangible as well. Crafting speed, maximum stack size, increased water retention, and others improve your experience immediately, but then new carts also add functionality and a new train engine brings you to further biomes. It all works quite well, and the core loop is both consistently interesting and intense.

There are times where the controls can be a little too floaty, making it difficult to grab and place resources when time is of the essence. There’s also the possibility that a single mistake in your planning can leave you stranded without resources or tools as the train barrels to the edge of the track. This isn’t so much a flaw as it is a painful possibility that could end your endless run in one fell swoop.

These small nitpicks don’t stop Unrailed! from being a clever, fun, and unique cooperative experience. It’s a great example of an idea executed extremely well and kept simple enough that it doesn’t lose its charm over multiple sessions. The ability to input a specific seed for the algorithm also gives you the chance to hone your skills on specific maps.

Block-Based Art Gets The Job Done For The Most Part

The art style in Unrailed! Utilizes the tried-and-true block-based graphics we’ve seen popularized by Minecraft, but done so with an isometric view and much smaller blocks. It’s a simple, but effective style that makes things like cutting wood or mining ore satisfying. It also facilitates a buttery-smooth frame rate, even when you have multiple players running around doing separate tasks.

A variety of characters also helps give you your visual identity, but things can get confusing if you pick two or more with a similar color palette. They don’t have a lot of detail, so it’s important to choose visual distinct characters. Lastly, I will say that the visuals can also betray the playability when it comes to things like mining ore. Since each player can only wield one of the tools at a time, I ran into an issue where a half-mined piece of ore (represented by a small pile of rock on the ground) kept me from walking into an area of the corner of the map and was partially obscured by the camera.

As a result, I couldn’t reach the wood beyond it and couldn’t get the pickaxe back in time. It’s a highly specific example, but worth mentioning since the graphics are simple and the perspective is pulled back and over the map.

Really though, Unrailed! is a no-brainer if you’re looking for a fun co-op or party game experience. It’s easy to jump into, challenging and fun to master, and infinitely replayable. All the hallmarks of a co-op classic.

A copy of Unrailed! was provided to PS4 Experts for review purposes.