The isometric action RPG was something reserved for PC gamers alone until the rise of consoles. On the PS2, we had some standouts like Champions of Norrath, and Baldur’s Gate: Dark Alliance 2, but it wasn’t until Diablo 3 hit the PS4 that this genre hit the mainstream.

Plenty of indie studios have offered their own takes on the genre, but Titan Quest was one of the originals back in 2006 when it released on the PC. Now, after all this time, it has come to console with a modern look and controls redesigned for the DualShock 4. How has it stood the test of time? Read on to find out.

An Interesting Story With Dated Delivery

Titan Quest is one of the few games that dives deep into Greek Mythology (God of War notwithstanding). You play as a warrior in a world where monsters have suddenly begun tormenting humanity for reasons unknown.

While the Titans were imprisoned by the gods of Olympus long ago, there are rumblings that they are planning a return. The connection between Olympus has been severed, and humanity is left to fend for themselves with the threat of annihilation looming on the horizon.

It’s a very solid premise, and it quickly opens up into areas that take you to other parts of the world in your journey. My only real problem with the story is the way it’s told. The cutscenes have not been remastered with the rest of the game and seem to run in their original form (from 2006).

This is a little rough, but the rest of the exposition is primarily delivered through conversations with NPCs. Again, not a problem, but the text is presented to the player in a scrolling format not unlike the beginning of a Star Wars film.

The text moves agonizingly slow as the voice actor/actress reads each word. If you’ve read ahead and want to skip, pressing X will skip the entire conversation instead of going to the next line.

This boils down to moments where you simply have to sit and wait through the conversation to see all of it. It hampers the pacing and its woefully outdated in 2018. If you can get past the dated storytelling, Titan Quest does include the full game, along with the Immortal Throne expansion.

A new Norse-themed expansion was released on PC recently, but it was not included in this collection. It’s possible it could be sold as DLC at a later date, but what you get here is plenty of story for your money. Let’s find out if the gameplay has fared better in its trip to the present. 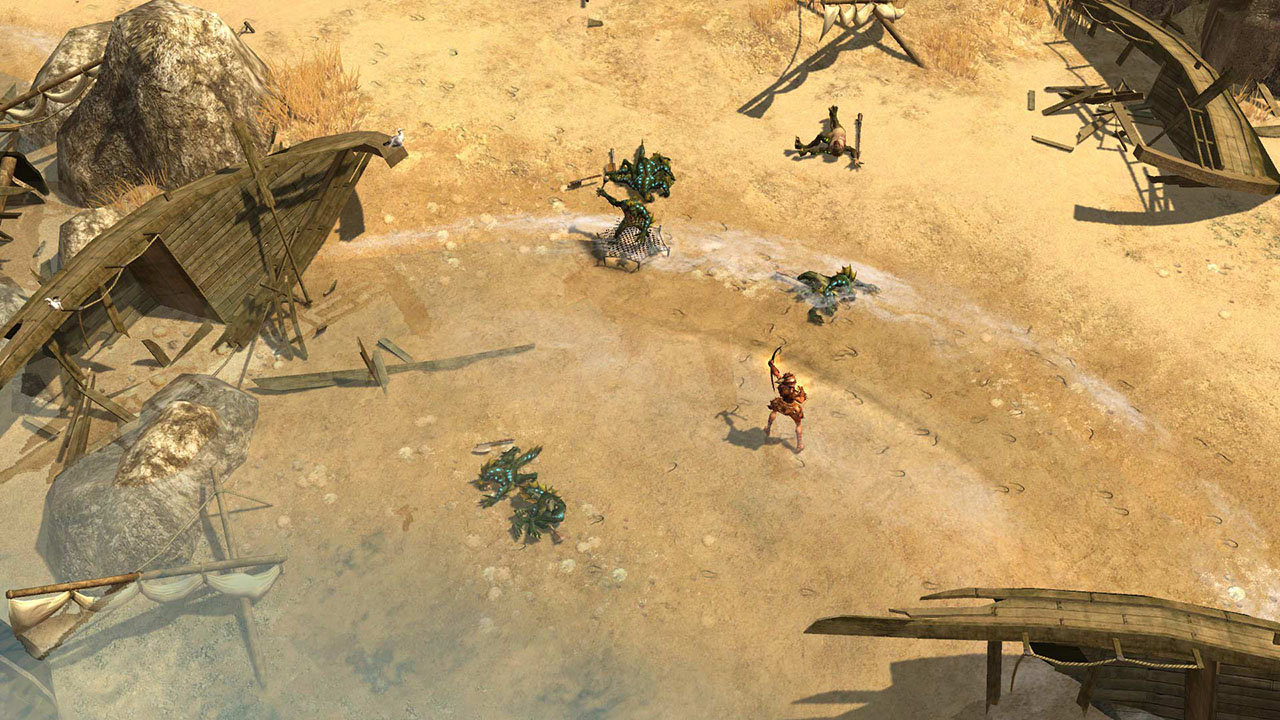 I really love isometric RPGs like Titan Quest. I grew up playing them on both PC and console, but the thing that I’ve truly loved about the PS4 is the introduction of local co-op into these games. Diablo 3’s console release did it, and just about every other entry in the genre has offered it as well.

Titan Quest offers online co-op for up to six players, which is great. What it doesn’t do, is offer local co-op of any kind. This was a massive disappointment for me, as I love to play these kinds of games with my significant other, Christina, who I often refer to as my “player 2.”

She and I love cooperative experiences and were really looking forward to Titan Quest. You can imagine the frustration and disappointment that ensued when I found absolutely no local co-op option.

It wasn’t a great first impression, but I went to ancient Greece alone despite this revelation. The controls have been admirably mapped to the DualShock 4. A radial wheel has been implemented to quickly access important menus like your inventory and map.

Skills are mapped to buttons, while attacks are simply hack-and-slash affair. At launch, the game’s movement felt stiff and unresponsive, but post-launch patches have since improved this, along with the targeting of enemies.
You don’t choose a class from the outset. Instead, Titan Quest lets you place points into skill trees to define your specific class and skillset. It offers flexibility in your skills that I enjoyed, but it can also be daunting for inexperienced players who will most likely find themselves creating builds that aren’t ideal for successful gameplay.

Some additional tutorials could have gone a long way towards explaining these mechanics, but I was able to figure them out pretty quickly. The ability to socket your weapons and see your new equipment/armor is also all here in fine form.

Ultimately, Titan Quest feels like a game from the past. When it released, these ideas were all fresh and new. After more than a decade, a lot of these mechanics have been done again and done better.

While the inclusion of a controller-friendly scheme certainly helps, Titan Quest doesn’t do enough, in my opinion, to really differentiate itself in our modern generation of gaming. As a piece of gaming history, it’s very cool, but as a 2018 PS4 game, it feels clunky in comparison to other titles.

Honestly, if it had just included local co-op I could forgive some of these things. Being able to play this game with other people would absolutely relieve some of the repetition and overall loneliness of the world.

The grind for loot and progression was fun back then, but today it’s not enough to keep things exciting unless you have someone with you. Unfortunately, unless you know someone who also bought the game, you’re going in alone, which is not the ideal way to play something like this.

A Fresh Coat of Paint 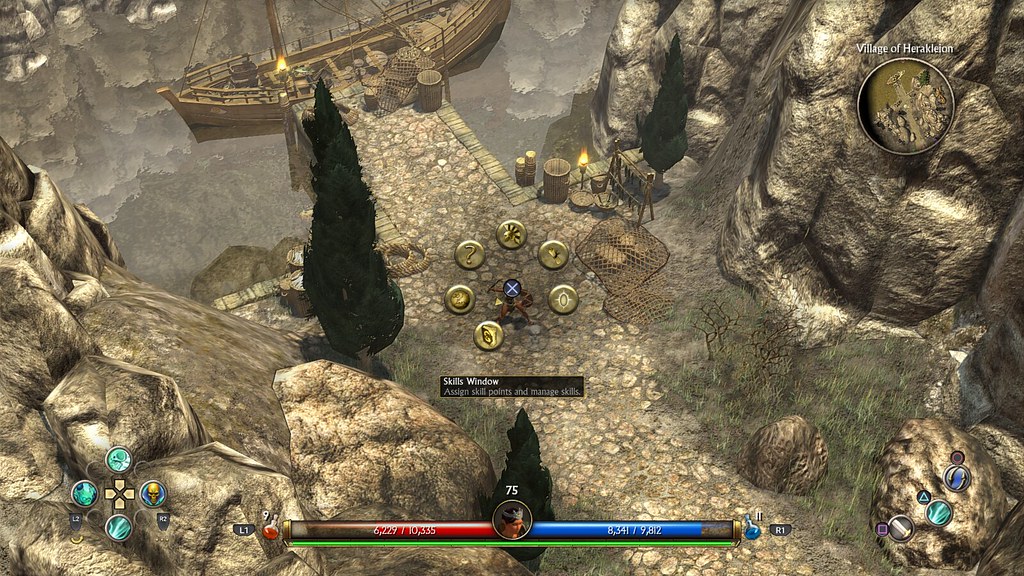 Setting aside the aforementioned cutscenes that didn’t get a fresh coat of paint, the rest of Titan Quest looks sharp and inviting on PS4. Character models are a little rough, but the environments have detailed textures and the frame rate holds steady during chaotic encounters.

The flourish that some skills have include some visually exciting effects, but the general combat feels very stiff in the animation. It doesn’t appear that these have changed much since the original.

A lot of games owe their success to the foundation that Titan Quest laid for games to come, I don’t want to deny that. I wish I could say that this new version holds up better, but many of the outdated mechanics and animation are hard to ignore.

Compile that with the severe choice to not include local co-op, and Titan Quest’s triumphant return isn’t quite what it could have been.