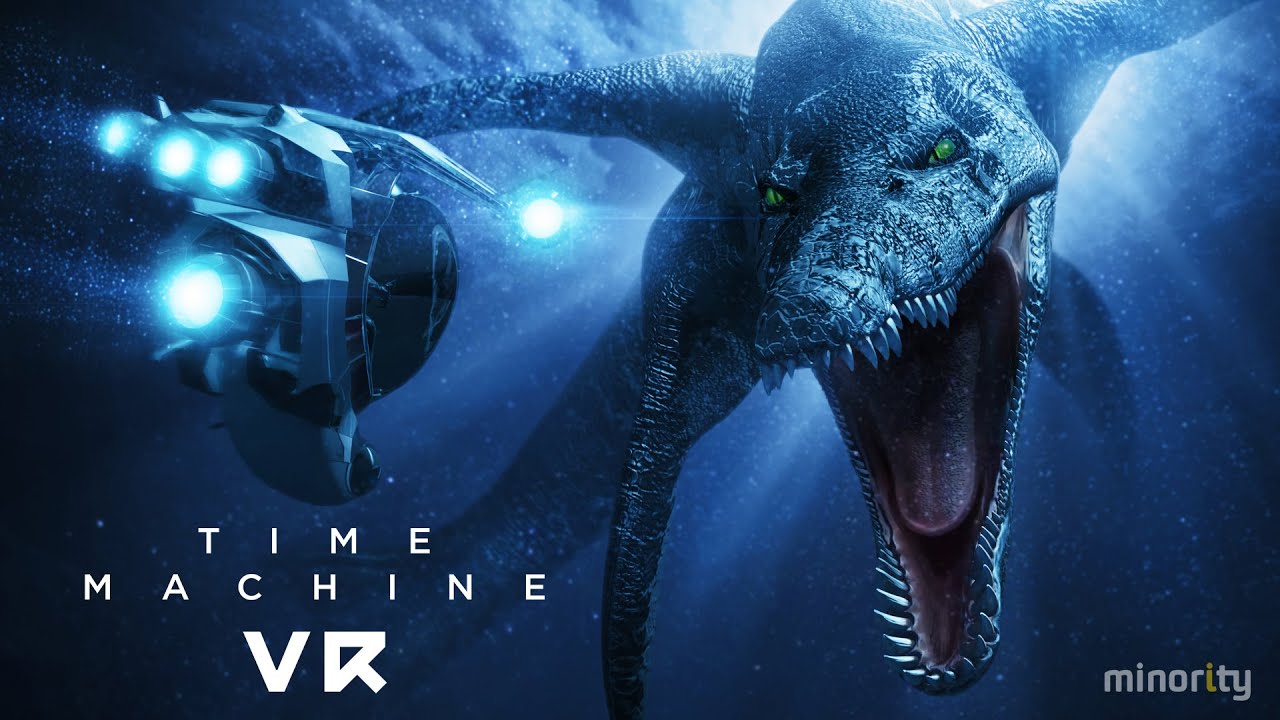 It’s amazing how virtual reality has managed to touch upon all of my favorite elements in storytelling. First we had Robinson: The Journey, which scratched my itch for dinosaurs, and now we’ve got Time Machine VR which also includes dinosaurs and my other favorite mechanic: time travel!

This game has received a lot of love on PC, but now that’s come to PlayStation VR, I’ve finally had some time to dive in and see what all the fuss is about. So, does Time Machine VR take you on an epic journey to the oceans of the past, or does this educational game belong in a museum? Let’s find out!

Go to the Past to save the Future

Time Machine VR doesn’t waste any time getting you into the past. Right away, you’re sent into a mission beneath the surface of the ocean. Your only companion on these missions is an artificial intelligence that guides you through the various objectives.

Your time machine is a small pod that can navigate the environment easily and allows you to transport between the past and the future where you work for a scientific foundation in Svalbard, Norway. Shortly into the game, you’re informed that a prehistoric virus is ravaging the human population of Earth.

As a result of the melting glaciers and global warming, this ancient virus has been released on the unsuspecting population of the future. The death toll is already high by the time you’re informed of this, which means that it’s time to get to work. Somehow, the ancient creatures of the ocean were able to beat this virus, otherwise they would have all died off back in the Jurassic period.

That means humanity’s salvation lies in the past. Your sent back to gather data and information in the hopes of manufacturing a cure. That’s all I’ll say on the story for the sake of spoilers, but it’s a cool setup that lends purpose to the data collecting gameplay.

The game uses live action video for your briefings, which adds some realism to the proceedings. The acting is good, but not great. Some lines come across as awkward, but the robotic voice of your A.I is appropriately stiff without being cheesy or annoying.

It works for me, and it makes the story feel like a hybrid between a science fiction movie, and a documentary, which is a nice combination. Despite the intense premise, the game itself maintains a decidedly relaxed pace, which is for the best.

While a game like this doesn’t necessarily need a story to be cool, the fact that the developers went through the trouble of framing these aquatic adventures in a overarching plot makes it all the more compelling and goes a long way towards submersing you in the world. The gameplay in Time Machine VR is fairly simple, but it has several different iterations. When you’re in the past, you take the place of a silent pilot within the cockpit of your pod. In front of you, a convex glass bubble of sorts gives you a wide view of the area in front of you.

When you look down, you’ll see your body, complete with arms and legs. Using the left and right stick, you’ll move through the environments with ease. The left stick controls throttle, while the right stick controls turning and vertical movement. Motion sickness wasn’t an issue for me, or my girlfriend who is susceptible to the issue in VR.

My theory, is that having a cockpit and a physical body in the game gives your brain a foundation to rest on. Yes, you’re moving, but since you’re sitting down in the game, it doesn’t cause the motion sickness that can happen in games where you’re walking around.

Looking to your left and right allows you to see the propeller engines that power your pod and looking up gives you a panel readout with information like the period and year you’re currently in. Little touches like this give the cockpit a great sense of space and make you feel like you’re actually sitting in a time machine.

You’ll have a variety of tools at your disposal as well. A tracker can be fired off to follow and analyze creatures, while your scanner can collect data on various species you encounter. An Echography tool lets you see inside them with a cool x-ray mechanic. Bait is used to manipulate the behavior of creatures in certain situations, and several other tools round out the options.

The way they’re deployed is largely the same, which can bring on a creeping sense of repetition. The game does a great job of explaining how each of the tools are designed to be ephemeral so they don’t alter the fabric of space and time by changing the past.

The gameplay loop becomes largely the same as you progress, and the only danger you face is from predators who mistake you for a meal. This is why the game can be a very relaxing experience for the most part, but the repetitive nature of your tools and the way they’re deployed can bring on fatigue during long sessions.

The most interesting mechanic is by far the time dilation you can utilize. By holding the L2 button, you can freeze time temporarily and get close to creatures that would otherwise eat you. This was especially awesome when I paused time at the moment a massive creature had its jaws open and ready to crush me.

The factual information you collect about the prehistoric creatures you encounter gives the game an educational touch that most don’t bother with. Learning actual information about these dinosaurs while interacting with them is one of the most rewarding aspects of the experience.

With additional mechanics and perhaps some land environments, Time Machine VR could have been an exceptional experience. As it stands the idea is very good, and the execution is solid, but repetition sets in and the leisurely pace slightly betrays the urgency of the game’s main objective.

Detail Where it Counts

I was able to play Time Machine VR on the PS4 Pro and I was overall pleased with the graphics. The environments were fairly simple, but the water effects and the dinosaurs have an extra attention to detail that helps them stand out against the pedestrian environments.

The animation on them is excellent for the most part, but every once in awhile they will make a jarring motion that slightly hinders the immersion. These are small gripes, however, as the overall presentation is very strong. The cockpit is especially good for limiting motion sickness and adding a strong sense of presence to the gameplay.

Overall, Time Machine VR is a strong title in the PlayStation VR lineup. It’s a meaty experience in comparison to other experiences, and the educational factor gives it a unique edge. While it has a few hiccups in the gameplay and presentation, it brings enough to the table to differentiate itself from the competition and offer a fun and educational experience for VR owners.