My first exposure to the universe of H.P. Lovecraft was playing a title for the original Xbox called “Call of Cthulhu: Dark Corners of The Earth.” This game was by no means a masterpiece in terms of design or polish, but it was one of the best horror games I have ever played (and remains so to this day). Since then, I have read the horror of Lovecraft and delved into the universe, all while waiting and hoping for a game that would do the source material justice.

Many have tried, few have come close. The Sinking City is here for the PS4 from the developers at Frogwares. Known for their work on Sherlock Holmes (including a Lovecraftian crossover they made for PC in the past), this studio is primed to deliver. Time to find out if The Sinking City succeeds, or if it drives you mad for all the wrong reasons.

Both an Homage and an Evolution of The Genre

Right off the bat, I’m going to mention that I will do my best to avoid any and all spoilers. I will try to provide vague examples going forward, and of course, I’ll avoid any major story beats. I’d also like to mention this review covers version 1.01 (the patch released 6/25/19), which was intended to fix a screen tearing issue, among other performance problems.

I played The Sinking City on PS4 Pro, with Boost mode and Supersampling enabled. With that out of the way, let’s talk about this original story set in the universe of H.P. Lovecraft! You play as a private eye by the name of Charles Reed. Having been beset by horrific visions and nightmares, he heads to Oakmont Massachusetts where he hopes to uncover the source of these visions.

Prior to your arrival, the city was hit with a flood of supernatural proportions, leaving vast parts of the city underwater. The denizens have managed to continue living there, but the rush of water has brought new horrors from the depths, including creatures beyond our frail understanding of biology and life itself.

With plenty of experience from the Sherlock Holmes titles, Frogwares absolutely nails the atmosphere and storytelling from the moment you pick up the controller. Dialogue is period appropriate, voice acting is solid across the board, and the mystery is always pulling you forward to that next clue or development.

Fans of H.P. Lovecraft will find plenty of details here that other games leave out when they try to tackle this horror. Whether it’s name drops from classic titles like The Shadow Over Innsmouth, or developments that bring the darker side of the mythos forward, there’s a lot of detail and homage to the source material, despite Oakmont and The Sinking City being an original story set in this universe.

Now, the game does acknowledge the unsavory elements of Lovecraftian horror from the moment you start it up. The developers acknowledge the inherent racism of the time, and condemn it in due fashion (it’s also present in the author’s writing), but they chose to recognize it instead of ignoring the issue and pretending it never happened.

This leads to some racial tension between the fictional and not-so-fictional peoples of Oakmont, but in my opinion it’s handled well and I’m of the mind that we shouldn’t ignore these types of things.

The main story dives deeper into Lovecraft lore than any title I’ve seen since the aforementioned Xbox game, and I absolutely loved it for that. I found myself playing for hours on end just to move things forward and see a little more of where everything was going. I loved how the individual cases all played into the larger whole, like episodes of an ongoing television show.

The main story will easily take you between 20 to 25 hours, but the side cases are also worth exploring. These tend to flesh out more of the lore and introduce fascinating side stories that are absolutely worth your time. If you can’t tell, I’m very happy with the story in The Sinking City. It takes a talented team to truly capture the cosmic horror of Lovecraft and to dive into the admittedly difficult lore with such poise and grace.

They took the elements of the mythos that make it great horror, and built upon with it was a fantastic set of characters and a compelling mystery that never left me bored. It’s a tall order to achieve such a narrative, but Frogwares absolutely delivered on this front.

Time to see if the gameplay can hold up to these standards. 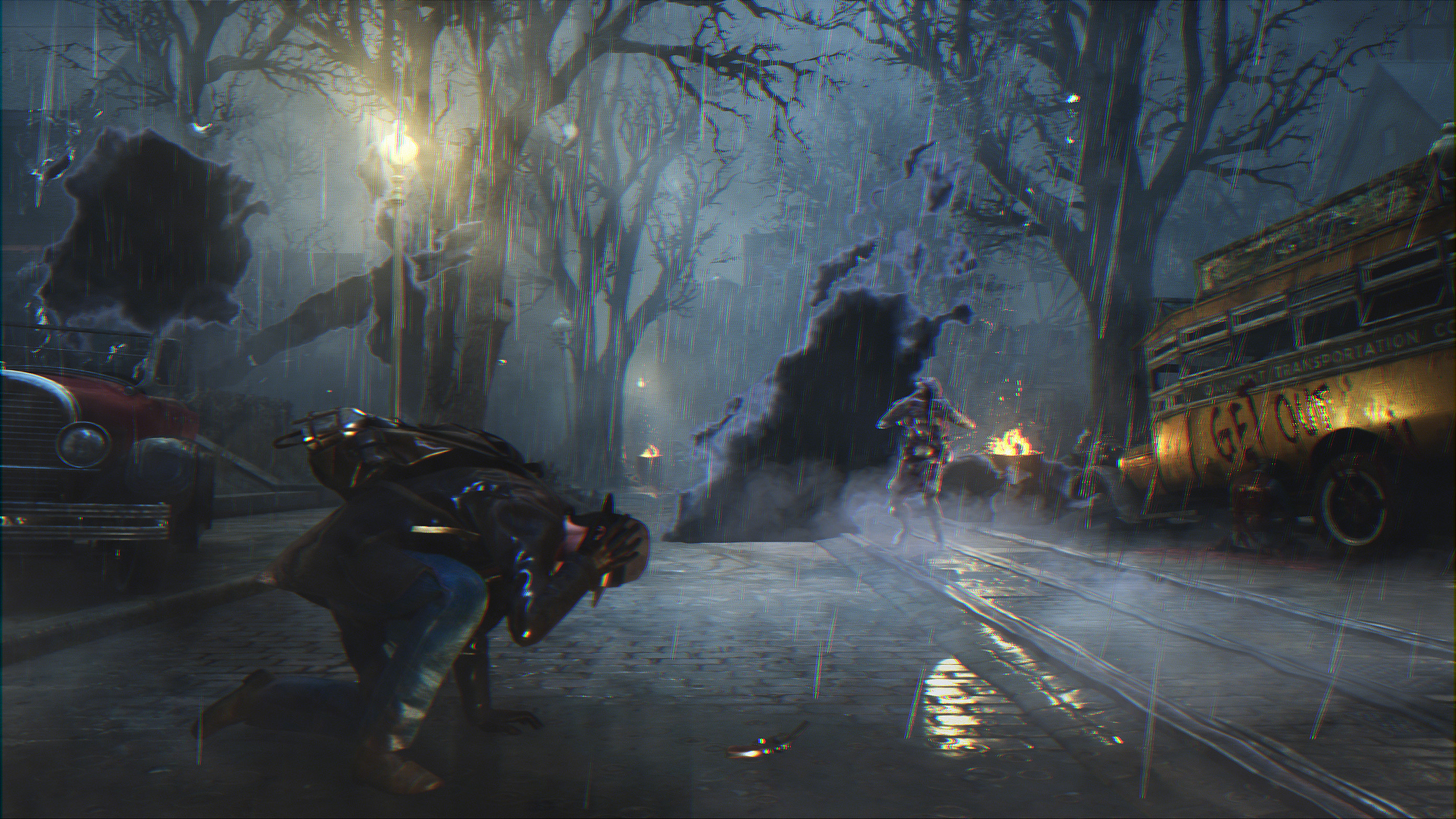 The Sinking City combines open world exploration with investigative gameplay and a sprinkling of combat and RPG mechanics. It’s a lot for a giant studio to achieve, but Frogwares is a relatively small team compared to most major developers. Even so, they’ve managed to pull together something much larger in scope than their prior titles.

Oakmont is a sprawling city with flooded streets, dilapidated stretches of broken buildings, and plenty of rain to go around. From the moment you set foot on the streets, you can feel the atmosphere all around you. Numerous characters go about their lives, while unfathomable creatures lurk in the shadows of allies and in the crevices of abandoned buildings.

Let’s start with the good. The Sinking City’s investigation gameplay is, hands down, some of the best I’ve ever experienced. With difficulty options that let you tune both combat and investigations separately, you can enjoy a challenge wherever you like.

Even on the lowest difficulty, however, the mysteries of The Sinking City will never reveal themselves to you without some work on your part. Clues and deductions are logged in your casebook and Mind Palace respectively, but it’s up to you to decide where you go and what you do next.

For example, in the early hours people will give you directions to nearby locations. They often provide a crossroads or street name, but the game isn’t going to mark that for you. You’ll need to open your map, find the location, and place a pin there yourself if you so desire.

This may frustrate some players, but pure detectives at heart will finally feel the freedom to become sleuths themselves. As time goes on, you’ll run into situations where you have even less clues than that. It’s here that I had a momentary roadblock in my progress, but then I realized what a real detective would do.

I needed to look for evidence of similar crimes in the city, so I went to the police station. Lo and behold, they had an archive I could use to search for what I needed. Just like that, The Sinking City changed my entire thought process in a way that games never had prior.

Locations offer numerous pieces of evidence (including both key evidence and supplementary clues to find for completionists). On the higher difficulties, you won’t be notified when you’ve found everything, so the challenge is most certainly there.
Finding all of the clues requires a combination of keen searching and use of your Mind’s Eye ability. The origin of this is explained very well in the story, but it essentially allows you to see into the past using places or objects. It also gives you a glimpse into past events, which you’ll need to piece together to complete sections of your cases.

Some of it has been done before, some of it has not. The Mind Palace, for example, is a mechanic from the Sherlock Holmes titles, but here it does not have right or wrong answers. Instead, you must make your own decisions and inferences by looking at the evidence before you.

Decisions in this game run the gambit from relatively easy, to morally gray in the best way. All of it feeds into truly excellent mystery gameplay. This leaves the exploration, combat, and RPG elements.

Exploration is solid in The Sinking City thanks to some truly detailed outdoor environments, plenty of NPCs, and incredible atmosphere. Switching between walking and using boats to navigate flooded streets feels great. Sprinting or boosting the boat with R2 also lets you get around faster, which I liked.

Fast travel points in the form of phone booths also unlock in smart areas close to major landmarks. Interiors fare less well, if only because many assets are reused more than I would like. In one instance, I saw an almost identical second floor (down to the objects), in two different buildings.

Combat is done in third-person like the rest of the game, and while it works fine, the guns don’t have a lot of impact, and controls feel too loose overall. The inclusion of a sanity meter and some outstanding effects when it drops are nice, but I could take or leave the combat.

RPG mechanics include three skill trees and some crafting that allows you to make bullets, medkits, and antipsychotics that you use in your travels. Even grenades and traps make an appearance as well.

These elements work fine, but again, investigations are where The Sinking City truly shines. The rest are just nice bonuses, even if the combat leaves a bit to be desired. Now, in terms of stability and issues you may have heard, keep in mind I am playing on version 1.01 of the title for this review.

Let’s talk about how it all looks and plays in motion.

A Few Cracks in The Game’s Sanity

The Sinking City is a game that feels like it clashes with the developer’s ambitions and the budget it was given. Characters are insanely detailed, and environments are appropriately rundown, but technical issues can get in the way of everything playing smoothly.

Prior to the 1.01 patch, screen tearing was rampant, along with pop-in and severe frame rate drops. Having played several hours with the new patch, I can say that the screen tearing is no longer an issue. Pop-up seemed to be much better in what I played, but a few problems remain.

It's the little things, like NPCs spawning in as you’re running down the street, or loading screens jumping in as you walk into a house or a new area. Since you’ll need to review the map a lot, it also becomes a little frustrating when you have to wait upwards of six seconds for the menu to open from gameplay. It’s not always this long, but it can be.

The marked improvement I noticed just from the 1.01 patch has me hopeful that Frogwares will iron out a few more of these issues, but even if they don’t, the current version fixes the largest problems (primarily the screen tearing), so players don’t need to worry about that anymore.

Despite some of the rough edges, Oakmont got its hooks in me from the moment I stepped off the ship. The Sinking City is easily the best Lovecraftian fiction we’ve had in gaming, especially on the PS4. It pays homage to the source material while blazing its own path into the black seas of infinity that span outward from the placid island that we call our understanding of the universe.

It’s cosmic horror at its finest, so if you can look past the superficial technical problems, you’ll find one of the finest horror games on the PS4. I can recognize its problems, but I also can’t deny that I loved every minute that I spent in Oakmont. Take that for what it is, and trust me that if you’re a fellow Lovecraft fan, you need to play The Sinking City.