Survival games are a big genre on both PC and console, but The Long Dark is the granddaddy of them all. This popular survival game has been in early access on PC for several years now, pending a story mode and final touches to the sandbox gameplay. Having been released on the PS4, the initial release includes 2 episodes of a 5-episode story mode and all the glorious sandbox gameplay you could ever want.

Should you dive into the wilderness and test your mettle against mother nature, or is this survival simulator dead on arrival? Let’s dive in and find out!

The Beginnings of a Unique Post-Apocalyptic Tale

The Long Dark stands apart from other survival games by ditching the usual survival fare. You won’t find any zombies, monsters, or otherworldly horrors here. Instead, you’re going face-to-face with mother nature and all the might she can muster.

The story mode, entitled “Wintermute,” is set in the Canadian wilderness after a geomagnetic disaster. You play as Will Mackenzie, a pilot who crash lands after the world-ending event sends his plane careening into the wilderness.

He is joined by his ex-wife who convinces him to fly her to an undisclosed location for mysterious reasons. Having been separated from here in the crash, the story mode focuses first on teaching you the basics.

In this regard, the story mode in The Long Dark acts as an excellent tutorial. If you jump directly into the sandbox mode, you’ll have approximately zero ideas of how the game controls or plays. The story mode is invaluable in teaching you the basics and concepts behind the game’s mechanics.

Once you get through the opening segment of the story, Wintermute begins to show you flashbacks that slowly flesh out the events leading up to the crash. I enjoyed the character development here. The tension between Mackenzie and his ex-wife is almost palpable. Their history is revealed at a steady pace, and while you may guess it, the delivery feels authentic and natural.

The story mode tends to move at a slower pace than I would have liked, relying on most only collection missions and vague objectives. The survival mechanics in place and a sense of urgency to these objectives, but it also heightens the frustration when you’re unsure where to go or what to do next.

At a certain point, it felt like the story was holding me back. I had wished that it would open up a bit more and lean on the survival mechanics. Instead of working as a framing device, the story tends to have a heavy-handed approach that goes against the freedom that the sandbox mode provides.

With only two episodes to work with thus far, it’s hard to say exactly how well Wintermute’s narrative will work in the long haul. From what I’ve played thus far, I would say it adds a welcome narrative to an extremely interesting world, but it can be a little too imposing on the survival gameplay, making it more difficult or linear than it needs to be.

Perhaps future episodes could offer more varied objectives and give players more freedom with how they approach specific missions. This would strike a better balance between the survival mechanics and the need for narrative structure.

Braving the Wilderness Has Never Been This Fun 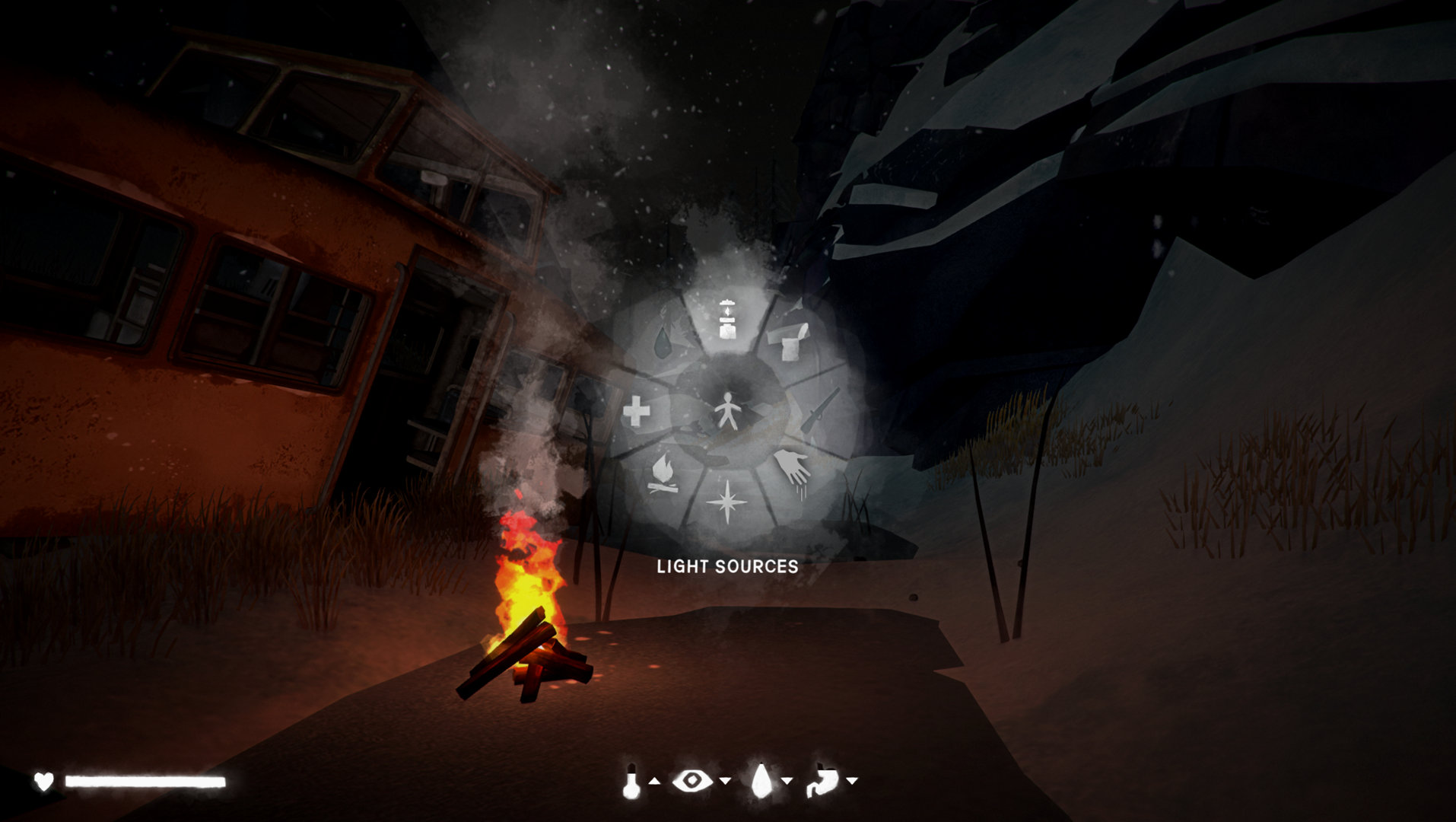 Survival games have a lot of various mechanics they need to juggle. Depending on how deep they want to go, developers need to consider temperature, hunger, thirst, injuries, and tons of other factors. The Long Dark’s time in early access on PC no doubt helped the talented team fine tune these mechanics before releasing on PS4.

With a touch of the DualShock 4’s touchpad, you’ll immediately get a line of icons on the bottom of the screen that outline your hunger, thirst, fatigue, and temperature. You’ll also see your overall health. It’s very intuitive and lets you get a quick glimpse at how you currently stand.

Managing these things is far easier said than done, but The Long Dark gives you options if you’re scrappy enough. To illustrate this, let’s talk about building a fire. Most survival games these days will require wood and that’s about it. The Long Dark requires that you locate an ignition source, tiner, fuel, and an optional accelerant.

Even if you have all of these things, success is not guaranteed. Depending on where you place the fire, the wind direction, and other factors, it may catch or it may go out and you’ll lose the resources you put into it.

Let’s assume you got the fire going. Once that’s done, you’ll need to keep it burning. Entering the menu on the campfire will give you an exact time limit before it goes out. You can throw more fuel on as needed to keep it burning. In this menu, you can also cook anything you have or melt snow to get water. Of course, you’ll need to purify or boil the water if you want to use it for drinking. All of that, and we just finished talking about building a fire. That’s the level of detail that you’ll find in The Long Dark.

It feels like most survival games have probably taken queues from The Long Dark, because this game feels like most cohesive survival experience out there. Things like clothing and weapons are needed to harvest and fight back against some of the elements. There’s an entire crafting system you can use to create what you need, and plenty of recipes to help you survive in both the story mode and in the survival sandbox mode.

A detailed injury and status system also allows you to see exactly what kind of ailments are plaguing your character on a portrait of them in the menu, and how to fix it. While the main character is set in the story mode, the survival mode allows you to choose between male and female.

Standard medicines will work, but more involved options like natural remedies or teas are available as well. What’s really interesting about The Long Dark, is how it evokes a sense of survival with very little direct threats to your well-being.

You’ll come across animals that can be hunted or turn you into their prey if you provoke them. Wolves, in particular, are more ferocious in the story mode than in the survival mode. Other than these moments, though, the game’s true threats are simply nature itself. You’re fighting against the bitter cold, the scattered resources, and the lack of shelter.

Finding a shack or building is a blessing in a game like this, and they often hold valuable treasures or places to start a fire where you can rest. I really enjoyed the level of customization in the survival mode experience as well.

You can choose your starting point from several options that span the game’s massive map. You can also choose your overall difficulty to tailor the experience to your liking. Unlike other survival games where threats are constant and the pacing is unrelenting, The Long Dark offers moments of quiet reflection alongside its intense battles for survival.

There’s nothing romantic or beautiful about being stranded in the wilderness fighting for your life, but despite this, I found myself marveling at the quiet moments in The Long Dark where the winds were still, the stars were out, and nature was briefly showing its calmer side. These moments of peacefulness are juxtaposed with the harrowing battles you’ll fight against the elements.

There are some qualms I have with the story mode’s linearity, and without a traditional tutorial, the game doesn’t offer much help in figuring everything out, but that’s about it. From a gameplay perspective, this is the purest form of survival I’ve seen.

The Horror and Beauty of Mother Nature 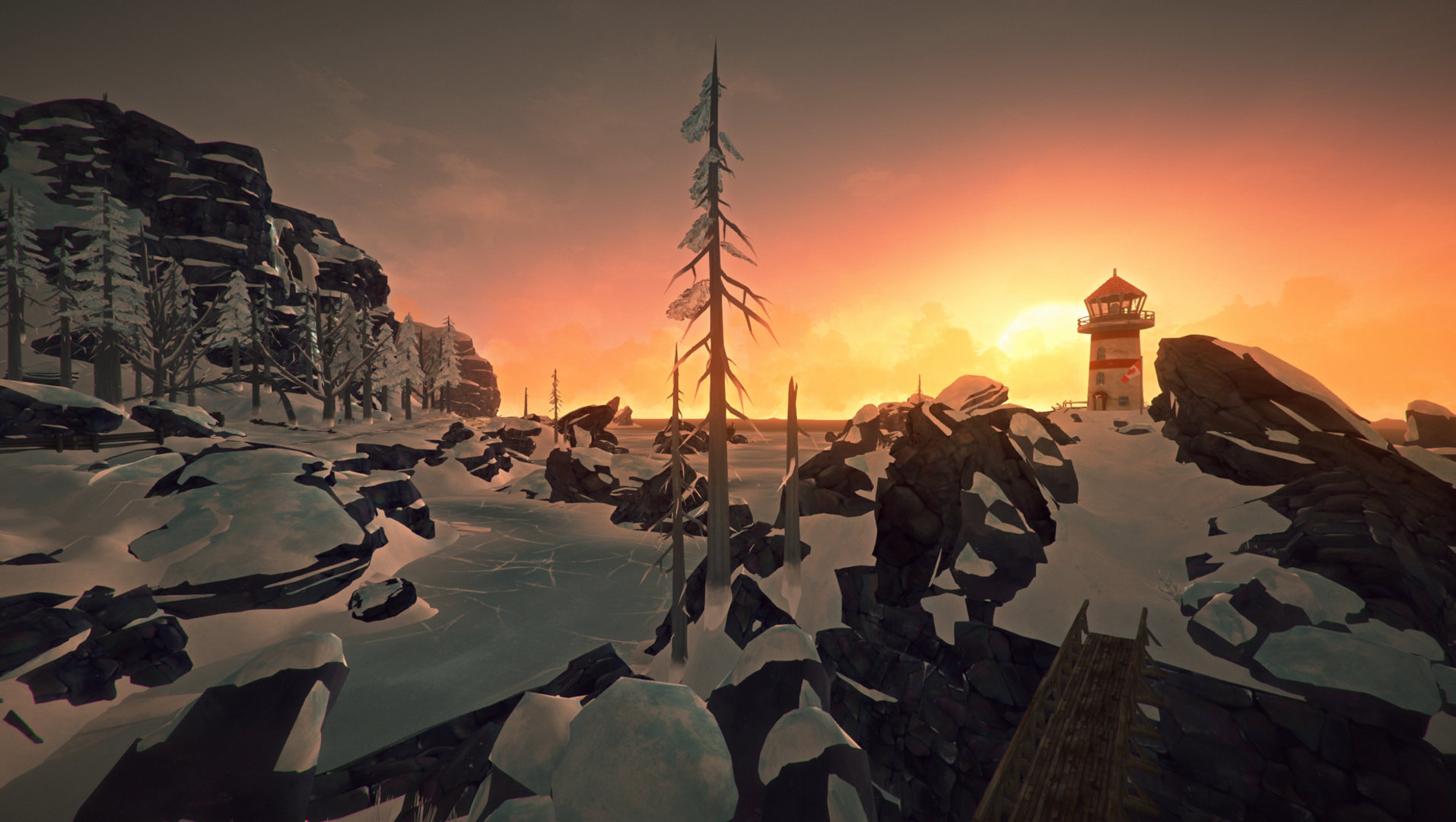 The Long Dark’s presentation goes for more of an artistic look than a realistic one. Instead of photorealistic graphics, there’s a soft art style to the environments. The sterile white of snow surrounds, but it’s punctuated by the brilliant color of auroras shining in the night sky.

Thick forests dot the horizon, and various landmarks like crashed freight cars or abandoned cabins add variety to the snowy environments. Similarly, the red/orange glow of your torch as it illuminates a dark cave keeps the tension high as you fight to stay in the light.

It’s a wonderful presentation that highlights the beauty and terror of mother nature in equal measure. The real question now, is how does it pair with the music? Those who have read my reviews know that music and presentation, in my opinion, is like pairing a meal with a fine wine. It needs to match, or the atmosphere crumbles.

With that, let’s talk about the soundtrack in The Long Dark. Much like the game itself, the soundtrack is about highs and lows. There are long moments of deep bass, highlighted by long strokes of violin and cello. The low tones continue to lay a strong foundation as woodwinds join into the fray and add moments of brief light to the otherwise haunting music.

Much like The Long Dark’s quiet moments, the soundtrack is reflective, but also majestic. It illustrates the looming danger all around you, while offering soaring measures of undeniable beauty. It’s one of those soundtracks that makes your heart swell when you listen to it. It fills you with a sense of determination.

It’s a masterful pairing to match the wonderful presentation. I look back on my time with The Long Dark, and I see a game that truly understands survival. Not only the danger and mystery of it, but also the moments of hidden beauty between the darkness.

It’s a culmination of the genre, and while the story doesn’t quite blow me away just yet, I can confidently recommend the experience based on the exquisite survival mode alone. If you’ve tried and failed to get into the survival games on offer these days, maybe it’s time to turn off the lights and embrace The Long Dark.