The god game genre has long been one that you found almost exclusively on PC. Whether it sticks to the traditional definition of the term or throws in some elements of real-time strategy, these games have always been dominated by the mouse and keyboard combo. Occasional forays to the console realm have been met with mixed results.

Now, developer Secret Sorcery has brought their own flavor of this genre to PlayStation VR in the form of a game called Tethered. Have they managed to make this genre work on a console, or does this game have too many strings attached? We’re about to find out!

The Mantle of The Spirit Guardian

The world of Tethered is composed of floating islands protected by Spirit Guardians. Unfortunately, all of these guardians are gone, except for you. All hope is not lost, however. You can resurrect your fallen brethren by gathering spirit energy.

Collecting spirit energy is done by keeping your people safe. Known as “Peeps,” these tiny creatures depend on the Spirit Guardians to keep them safe from creatures known simply as “Critters” that come out at night.

Keeping your Peeps safe while gathering knowledge and spirit energy is no simple task, but if you want to conquer the game’s 13 floating island levels, you’ll need to make it happen. Now, this is where games like this tend to fall apart in the transition to consoles, but Tethered does something different.

A Genre Reborn in Virtual Reality

With VR reviews, it’s difficult trying to convey the level of immersion and depth you experience. What’s even more difficult, is trying to find examples of VR games that are full and in-depth experiences.

Tethered is by far the most well-rounded and feature-rich experience I’ve seen thus far on PlayStation VR. It all begins with the gameplay. The first level serves as a tutorial that slowly stacks on the various layers of the experience.

You assume the role of a Spirit Guardian floating just above the level. Using the Dualshock controller and the VR headset, you can look around and select stationary clouds above the island to switch your camera's perspective with ease.

It is relatively known that the mouse and keyboard setup is the fastest way to select items on a screen, but the talented developers at Secret Sorcery have found an even faster way to navigate a world like this one.

A small cursor on screen moves with your headset in pristine 1:1 tracking. Combine this intuitive control scheme with the X button on your controller, and you have everything you need to know to start playing Tethered.

I can’t stress enough how natural and engaging it feels to simply look at something and be able to interact with it. The only way it could be more intuitive, is if the game knew what you were thinking. Issuing commands to your Peeps is done by holding the X button while looking at them and then looking at the item or enemy you want them to interact with. Once you’ve done this, releasing the X button “tethers” them to that task.

An ethereal blue line connects your peeps to their tasks, making it easy to see where they are going and what they’re doing at a glance. You’ll begin by collecting resources like food, stone, ore, and wood from the surrounding environment.

A weather mechanic also allows you to utilize and combine various elements like sunshine, rain, and snow by tethering the clouds above the island to each other or to the various resources below. The effects vary based on the type of weather, but they can revitalize resources at a basic level when they start to run low. 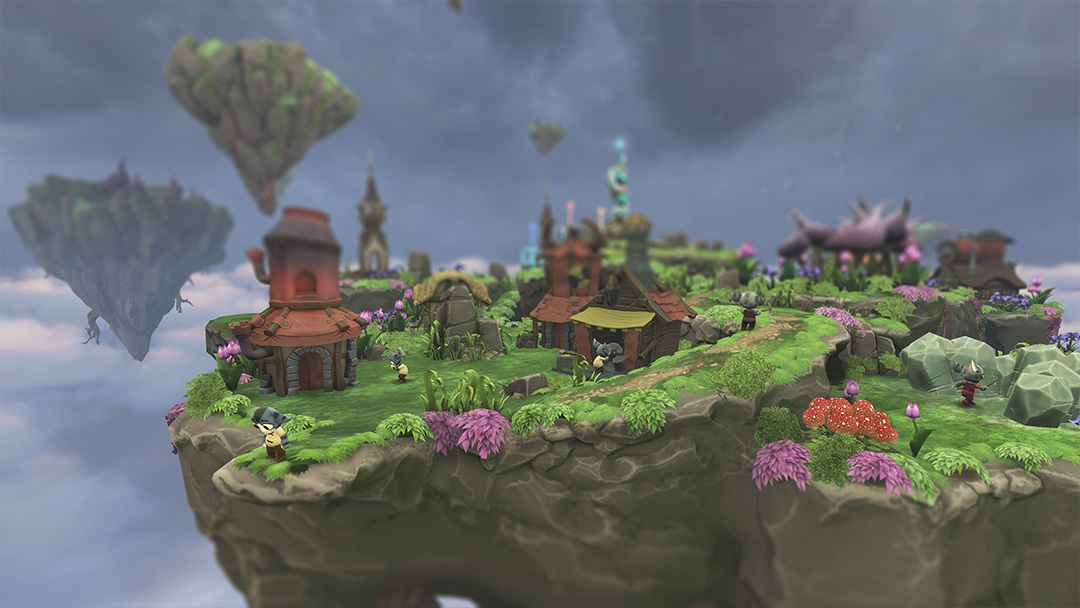 New Peeps are delivered to you via eggs that fall from the sky. If you incubate them or tether sunshine to them, you earn a new member of your population. If you let them go, a grub is born that serves as a small source of food, but nothing else.

The game continues to stack on new features by allowing you to spend your resources to build structures that improve your resources or offer the ability to upgrade your Peeps. For example, a barracks will allow you to promote two peeps in your population to heroes that do more damage to the critters that come out at night. More barracks, more opportunities for heroes.

The same goes with another structure called the Moot Hall. At its basic form, this building allows you to specialize certain Peeps with roles like farmers, miners, and prospectors. These specific roles allow them to harvest resources more effectively.

You can even upgrade the resources themselves, Stone can be upgraded to a quarry, and farms can be upgraded to things like a pumpkin patch which can grow without sunlight. Everything in Tethered starts at a basic level and offers branching upgrade paths. This allows you to customize your strategy and tailor both your buildings and Peeps to your play style.

All of it works in beautiful harmony. The headset's precise tracking makes selecting and tethering as simple as turning your head and pressing a button. While some would argure that Move support would have been ideal, I would venture to say the current head tracking system is more reliable and precise.

Yes, there were a few occasions where things got hectic and I had trouble selecting a specific Peep in a group of them, but these were rare moments that didn't hamper the overall experience. Being able to select multiple Peeps at once could have streamlined the experience further, but I never felt like I was out of control.

Creating a strategy game like this involves a lot of moving pieces, but as you can see, Tethered manages to put them all together into a cohesive experience and is simple enough for beginners to learn, and complex enough for strategy veterans to find the challenge they're looking for, especially when it comes time to defend your Peeps at night.

The combat simply involves tethering Peeps to enemy units. Heroes, of course, will do more damage, but anyone can fight. They will heal over time, but you can also send them to an upgraded Tavern building to rest and recuperate.

Peeps will also become despaired if you don't keep them busy. This can lead to dark places that I didn't expect the game to touch upon. Some would say that having a Peep become depressed and possibly cast themselves from the island's edge is too far from the game's happy tone, but I would argue that this kind of feature makes them more than just cute creatures. They have feelings, and that makes us care for them.

Each of the game's thirteen levels (including the tutorial) can take between thirty minutes to an hour depending on how quickly you gather Spirit Energy. Unfortunately, there's no option to save in the middle of a level, which means that you'll need to commit to finishing the level once you've started.

Some sort of auto-save or mid-level saving option would have been welcome, but I usually don't go into VR with the intent of being done in ten or fifteen minutes, so it's not a deal breaker. All of these things sound like the makings of a strong strategy title, but when you add VR, Tethered becomes something great.

The camera's placement just above the floating island gives you a deep and wide view of the area below you. It truly feels like you're a deity looking down on your kingdom. Switching your perspective using the stationary clouds gives you plenty of options for how you want to watch the action play out.

The entire purpose of a god game like this one is to have this feeling, but it's hard to truly capture those feelings of responsibility and power when you're using a 2D image. Virtual Reality brings this genre to life in a way that I've never seen. 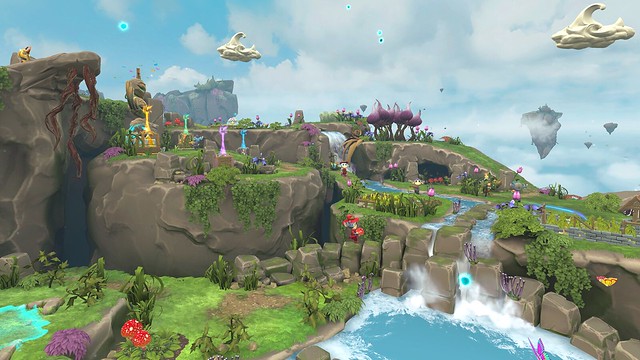 Tethered's style and graphics call to mind the glory days of god games like Black & White. Full of vivid colors and cute animated Peeps, all of it looks like it was pulled straight from a fairy tale world. The handcrafted islands all have a unique layout and structure which makes each level a joy to explore and conquer.

As you gather Spirit Energy, the island heals, revealing new secrets and knowledge to expand your Peeps abilities and upgrade options. When energy is released, you have to hold the square button to absorb it. It flies toward your screen and into your Spirit Guardian form. Suffice to say, it looks and plays like a dream. With VR, performance is an absolute requirement if you want immersion, and Tethered never drops a frame.

It's got looks going for it, but Tethered also hits a home run with the soundtrack from Kenneth Young. The ambient music is composed of string instruments and synths that set a relaxing and magical tone. Seriously, play with headphones and you will feel truly transported into this world.

The music itself has a kind of Celtic feel to it, with plenty of fantastical melodies. You'll quickly come to know what each sound means and you'll find yourself fully submerged into the game's world when everything is moving along during the daytime hours.

Tethered stands on its own as a well-designed and beautifully crafted strategy game, but as a title for PlayStation VR, it represents the most well-rounded, complete, and enjoyable experience I've had thus far on the platform. At it's asking price, this is something that every VR owner should have in their library.