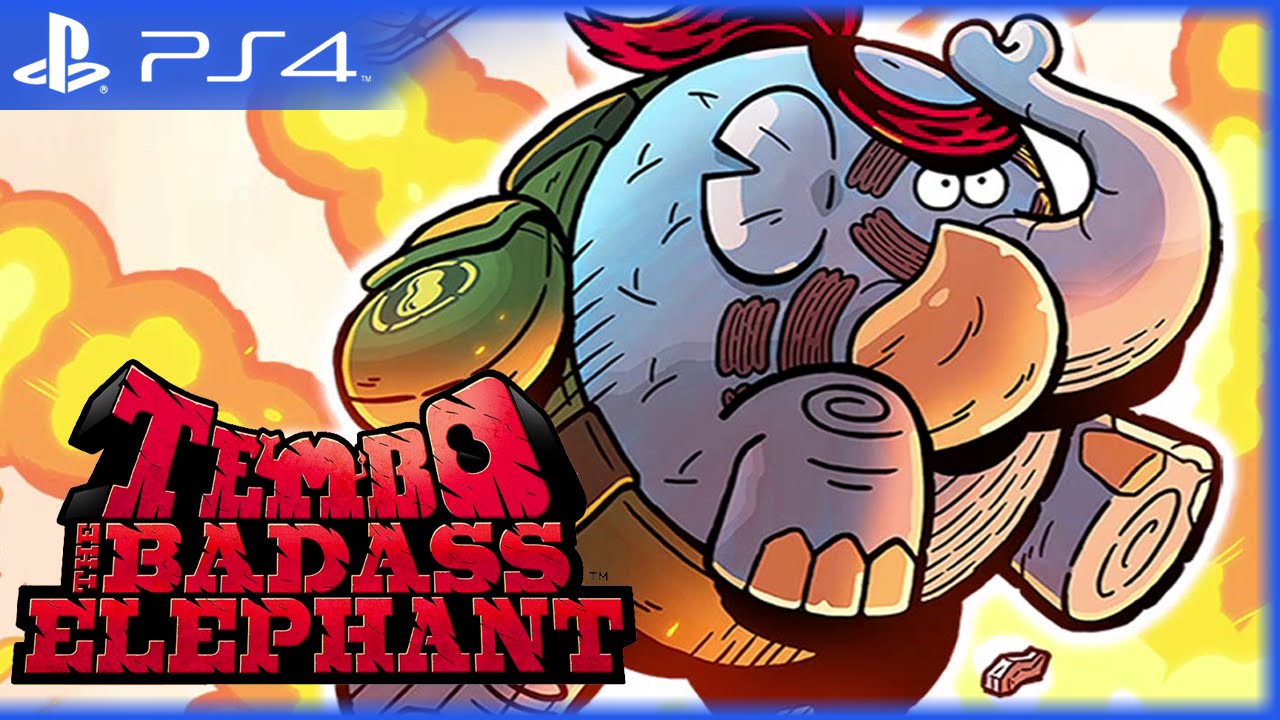 The era of classic 2D platformers has given way to a world filled with hyper-realistic graphics and violent shooters. That's not to say these types of two-dimensional games are dead though. No, far from it. In fact, the creators of Pokemon, Game Freak, have taken a break from their hit series to remind us of that fact with Tembo the Badass Elephant. At first look, you can't deny the title's merit. After all, he's an elephant dressed like Rambo. That alone gives him points.

A modest price and a great first impression (that title!) made this something I just had to try. Does it do the classics that inspired it justice, or should this elephant stick to petting zoos? Let's find out just how badass this Tembo character really is.

Games like this rarely focus on their story. Historically speaking, they would have a few cut scenes and an ending, but little more. Even older titles would just put the story into a page inside the instruction manual. Tembo decides to take the former route. You get comic book style scenes for every major milestone that give you the gist of what it going on. Speaking of, what is happening here?

Well, it seems that humanity has been invaded by a force called Phantom. This powerful army has us beat at every turn, so the general suddenly has a flashback of his time fighting in the jungle with an elephant dressed like a commando. Instead of getting his head checked, he calls up said elephant and asks for help fighting Phantom. So, Tembo says goodbye to his family, straps on his gear, his iconic red headband, and spreads some warpaint on his face for good measure.

That's about it folks. You'll get little intro cut scenes for major events or boss encounters, but otherwise it's all about this elephant and his supposed badass nature. A simple setup, but unique nonetheless.

As you've probably surmised, Tembo is not going to win any awards for the most graceful video game character in existence, but he does have some cool moves. For starters, you can charge forward at full speed, smashing through just about anything that gets in your way. You can also jump and do the iconic "butt-slam" that so many platformers have.

In true Sonic the Hedgehog style, you can also jump into the air, roll into a ball, and smash down on your enemies from a variety of angles. A little Yoshi-style aerial fluttering can also give you the extra "umph" to cross distances. The ability to spray water from your trunk, slide across the ground, and an upper cut move that turns your trunk into a hammer rounds out the package.

All of these moves are deployed across varied levels that will tempt you to charge through destructible environments, only to blow you up with a hidden pile of explosive crates. While the game does have some great moments of fast-paced action, it also reminds you (harshly may I add) that it's still a platformer, and it will most certainly throw enemies, traps, and obstacles in your way.

Each level tracks a few different things in each level:

Boss encounters are locked out based on the total number of Phantom soldiers that you've Tembo'd. These numbers aren't too difficult to reach though, just remember to destroy all the things in each level.

The levels range from semi-challenging, to bringing back those repressed memories of Bloodborne in difficulty. Since you are running on a system of "lives" you'll need to keep your deaths to a minimum. You can take a number of hits, but if you fall down a pit or into some lava, it's instant-death. Checkpoints are plentiful, but if you lose your lives, it's back to the beginning of the stage.

So, the biggest complaints here are the instant-deaths that devour your lives, and the occasional spike in difficulty. Beyond that, the game is a bit short at only 7 hours or so, but it does offer plenty of reasons to go back for that 100% completion.

Tembo the Badass Elephant is a nice looking game. It has a lot of bright colors and some great destruction effects. Fire, smoke, and shards of metal mark your path as you blaze through everything that isn't bolted down. Enemies explode in purple smoke that's shaped like a skull when they meet their demise.

Tembo himself has a wide variety of facial expressions ranging from intense to hilarious. His animations are smooth and the comic book style effects tie all the action together with plenty of "BOOMS", "OUCH", and others fill the screen.

All in all, Tembo the Badass Elephant is the perfect game for someone looking to get that 2D platformer itch scratched. It doesn't do anything to change the wheel, but what it does, it does very well, even if some of the concepts are a bit dated by today's standards.