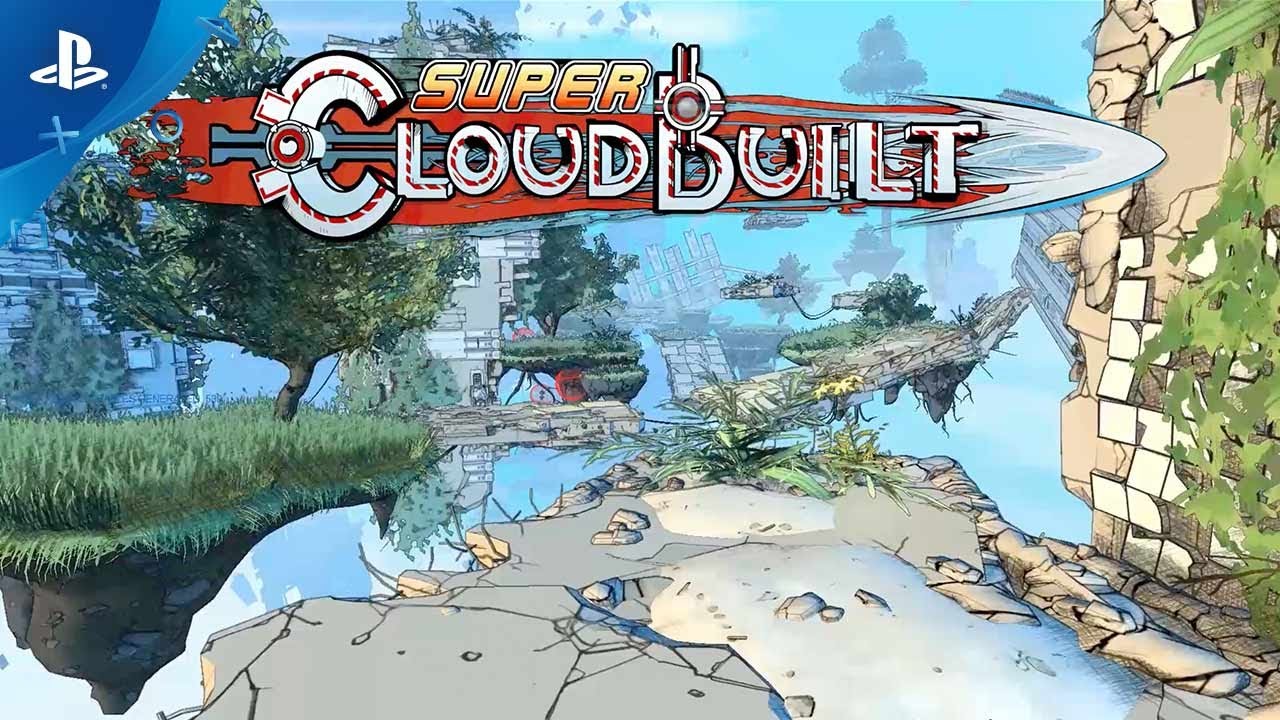 Parkour and platforming are two elements that you don’t see very often in gaming. While some games have tried to scratch that itch, they’re usually like the precision and speed one would expect. Super Cloudbuilt is here to fill that void in your gaming life. With a colorful cel-shaded art style and ultra-fast gameplay, this parkour platformer is blazing a trail straight into your hard drive.

Should you jump in and go for a ride, or does this game slip and fall long before it reaches true greatness? Let’s find out!

A Mysterious World and an Experience Reborn

While PS4 players may not know this, Super Cloudbuilt is actually a revamped version of an original PC game called Cloudbuilt. This new version features an enhanced story, redone graphics, and other tweaks as well. PS4 players are getting the opportunity to try it for the first time.

For those who are not familiar, Super Cloudbuilt is a fast-paced platformer with parkour elements that features massive levels, multiple paths, challenges, and hidden collectibles. It’s also very, very difficult. That’s not a bad thing, however, as the difficulty rises from the need to master its nuances.

In Super Cloudbuilt, you play as Demi. She is a fallen soldier who was severely wounded in a previous battle. Her body is in a coma, sitting in an empty hospital room. Her mind, however, runs free. You play as her subconscious, wandering the halls of the hospital which also acts as your level hub.

Despite having four endings, Super Cloudbuilt’s story could have offered so much more about its world and Demi as a character. It’s clear that the game is some sort of treatment meant to rehabilitate her, but the story would have benefited from more development, more presence throughout, and more backstory.

Even so, what is here is certainly intriguing, and the writing is well done. I would have liked more to go on, but the setup is intriguing and gets you right into the gameplay, which is where the game shines.

The story serves as a vehicle for Super Cloudbuilt’s gameplay, and this is where the game truly differentiates itself. You play from a third-person perspective and move through gargantuan levels that spread out in all different directions.

Towering structures, floating platforms, wall running gauntlets, and plenty more await to test your reflexes. Demi moves quickly, but the controls are extremely responsive. On your first run through a level, you can take it at your own speed. Trying out different paths will yield pickups like four key cards scattered throughout the level.

Finding these cards unlocks lockers at the end of the level which gives you upgrades, power ups, and unlockables. What makes Super Cloudbuilt so difficult, is the amount of skill and reflexes it requires from the player.

When you want to run across a wall or make a calculated jump, you can do so without any assistance, but you won’t get very far. Instead, you’ll want to use your jetpack to add an extra boost and a pep to your step.

The jetpack has a bar on the bottom of the screen that refills pretty quickly, but it also goes fast as well. It can be used with the L2 button to add momentum to wall runs and to scale vertical walls to higher platforms. You can also press L1 in mid air to trigger a boost if you need to extend your jump mid-flight.

Yellow spheres in the environment will instantly refill your gauge as well. While you do have a health bar and there are several types of enemies, combat won’t be a huge part of your experience, and that’s honestly for the best. 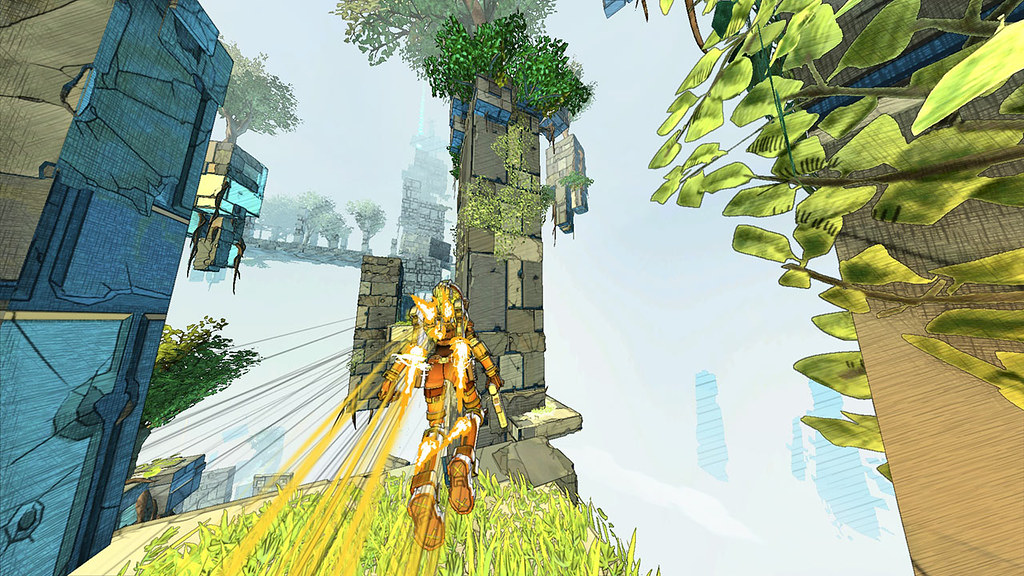 The shooting feels fine, but the enemies lack personality and really just slow down what would otherwise be a constant rhythm of parkour and platforming. The only time they become a threat is when you’re doing one of the challenges called a “pacifist” run where you cannot attack them, or another type of challenge where you die in one hit.

The other difficulty factor in Super Cloudbuilt is the life system. You have a set pool of lives that you get for the level, and checkpoints that are pretty far apart. Thankfully, you can pick up deployable checkpoints that can create a spawn point wherever you like, giving you some leverage in where you want to respawn if you meet your untimely demise.

The design of the levels is clever in the sense that one path may seem like the obvious route, but others are hidden beneath the surface. For example, in one level you may have shot a barrier to get through a section, but in your pacifist run, you can shoot said barrier. In this instance, you’re forced to find another way around, and there is one if you look hard enough.

Spotting those possibilities comes with time and practice. Super Cloudbuilt is a game where beginners are never experts. It requires time and patience if you want to meet and exceed the game’s challenges. It’s built around repeated attempts and your ability to be flexible at any given moment during gameplay.

I had moments of pure adrenaline, soaring across walls and flying across massive gaps like a cybernetic bird of prey. I also had plenty of moments where I went careening into the great abyss beneath the level. Thankfully, a quick button press respawns you. No loading, no waiting.

It’s a small detail, but many difficult games these days have long load times between deaths (which come frequently) and this only adds to the frustration. Super Cloudbuilt slaps you on the wrist and throws you back in for more. It’s a smart decision as it keeps the pace moving, even if you end up falling more than you soar.

The graphical style of Super Cloudbuilt has a nice cel-shaded look with a variety of colors. While the levels largely stick to geometric shapes and the occasional environmental decoration, their insane layouts always kept me visually engaged.

The proprietary engine used for Super Cloudbuilt keeps the game moving at a buttery smooth 60 FPS, which is exactly what the game needs to thrive. Between the colorful art style and the smooth gameplay, the presentation is right where it needs to be.

We can’t forget about Jacob Lincke’s soundtrack either. His combination of classic video game sounds, mixed with guitar, violin, and brass creates a soundtrack that is simultaneously nostalgic and epic. It fits right into the sci-fi feel of the game while lending a profound atmosphere for the mysterious and vast levels.

The soundtrack also manages to bring things down a notch when needed. Using somber piano melodies and haunting vocals, it also punctuates the story moments when Demi is reflecting upon her situation and the events unfolding around her.

The masterful marriage of old and new sounds makes the soundtrack one of the most unique elements in Super Cloudbuilt’s presentation, and it helps bolster the rest of the game’s rhythm and feel as a result.

When I look back on my time with Super Cloudbuilt, I reflect on a game that had the foundations of a really compelling science fiction tale. I remember moments of intense frustration, but then I remember those roaring victories where every single jump, slide, and wall run happened exactly as it should, leading to victory.

Super Cloudbuilt is a game of literal highs and lows, but if you can rise to the challenge, you’ll find an excellent parkour/platforming title to scratch the adrenaline junkie inside of you.