The open Battlefront beta has headed to a close today and the beta certainly gives a bird’s eye view of what to expect. As usual I’d like to point out it is a beta so aside from finding bugs (I didn’t find many myself) there is a lack of content which makes most beta gameplay go stale fast and Star Wars Battlefront was no exception.
The beta offered up three game modes to choose from, Drop Zone, Walker Assault and Survival. Drop Zone is a 8v8 mode where players fight to control pods. Claim and defend them until the next one activates. The team scoring the most pods taken will win the match, it’s all pretty straight forward and from I could tell seemed to be the more popular choice of the three. 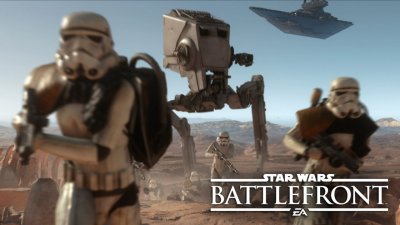 Walker assault can be a little confusing on the first run or two, even you have read the full description. Inspired by the battle of Hoth, you are tasked with defending or destroying the AT-AT assault vehicles aka Walkers. If you’re on the rebel team you will need to deploy Y-Wings Bombers you’ll fly over the battlefield and weaken the Walkers shields. Your team will be alerted once the shields are down and your weapons will become effective until the shields are back online. If the Walkers make their way to the rebel base its game over and Imperials will win the match.
Same goes for the imperial team, if the Walkers are taken down before they reach the base they will lose to the rebels. Walker assault had the most tokens to pick up on the ground so it’ll be easier to explain them based off this mode. Littered on the playing field you will notice token lying around, some of them will charge a weapon in your arsenal, it can add an item to your inventory, in the case of Walker assault it can contain a deployable ship for you to fly or offer the greatest reward and morph you into Luke Skywalker or Darth Vader. When activating a heroic icon you are gifted great strength and power, but easily taken down if these gifts go to your head.

The last mode available during the beta was Survival and it pretty much explains itself. Facing off against waves of the enemy, things start out easy and quickly get more difficult as you work through the levels. For those that miss the days of split screen, Survival offers two players on the same tv to relive some of the golden days of gaming. The option to play it with a friend online is also available, so if you’re into constant waves of enemies who only seek to take your life this is a great game mode. While more could be added to the mode, there isn’t much else to say on this mode.
All in all my time spent on the beta had me thinking to myself this is merely skinned as a Star Wars game shouldn’t prevent any Gamers from trying it out based on the name. While there is no campaign to be released with the full title there will be plenty of multiplayer to keep you busy. Announced yesterday, there will also be a season pass available worth 4 dlc drops. Also announced today, there will be no in game chat on any platform. This was a problem during the beta because chat was temporarily unavailable at one point and it restricted players from even creating a party in game, so they had join a friend already playing.
The beta was fun in small doses in order avoid getting burned out from the limited modes and maps, but that’s to be expected of course. Switching between first and third person view is available and that opens the spectrum for more players. With only a few weapons available it’s difficult to say how well balanced everything will be, but it seemed alright from my perspective. The biggest concern I have is the lack of game chat and how it affected partying up. I certainly hope we’ll be able to create parties if for reason PSN has issues with their system, though these days it’s not always easy to find a multiplayer game with active chat going on in lobbies, so I’m not sure I’ll miss that option. All in all the Star Wars Battlefront beta shows a promising full release. While everyone has a different opinion, this should please the masses. While not for everyone, no game ever is.