After a standout first title, developer Survios is back again with a completely different experience for PlayStation VR owners. This time we've got a fast and furious racing game that combines a sleek style with intense gameplay and unique track design. Welcome to Sprint Vector.

Does this concept have legs that carry it to the finish line, or does it run out of steam? Read on to find out!

A Killer Premise for VR

The pitch for Sprint Vector is like nothing else we've seen for PlayStation VR. This game promises an intense racing experience with a wide selection of tracks and power-ups.

You'll run, you'll jump, you'll climb, and you'll do it all in VR with PlayStation Move controllers. The control scheme is incredibly active, which has resulted in many people calling Sprint Vector a fitness game.

While there isn't a story, the game does have a strong identity. The game show concept that frames the races employs two excellent hosts with widely different styles.

Their banter is ever-present but never intrusive. You'll hear them commentating on the races and cracking jokes that fit perfectly into the game's established universe.

With the witty writing, I would have loved to know more about this galactic game show, but the lack of a story mode never robbed Sprint Vector of an identity for me.

The game has a strong and established style that works incredibly well. Let's find out if the gameplay holds up.

Two PlayStation Move controllers are needed for Sprint Vector. Using these motion controls, you'll make running motions with your arms to propel yourself forward. As you swing your arms downward, you'll hold the triggers and let go just as you complete the motion.

This basic movement will get you moving in the game, but it's only the tip of the iceberg. A selection of excellent tutorials gives you the chance to familiarize yourself with the various methods of movement and power-ups.

In addition to running, you'll also need to make quick motions for jumping, climbing, and even flight. It sounds like a lot, but the game layers on each of the mechanics through organized tutorials and tracks that slowly implement each mechanic based on their difficulty.

All of the mechanics feel amazing and work very well. Movement is smooth while flying and climbing are very responsive. You'll come across walls where you need to reach for handholds, but you can also throw yourself upward to gain height quickly.

Tracks that allow you to grab on and boost through sections are also extremely fun. In essence, Sprint Vector is a game that has you moving constantly. You'll break a sweat midway through your first race, I guarantee it. 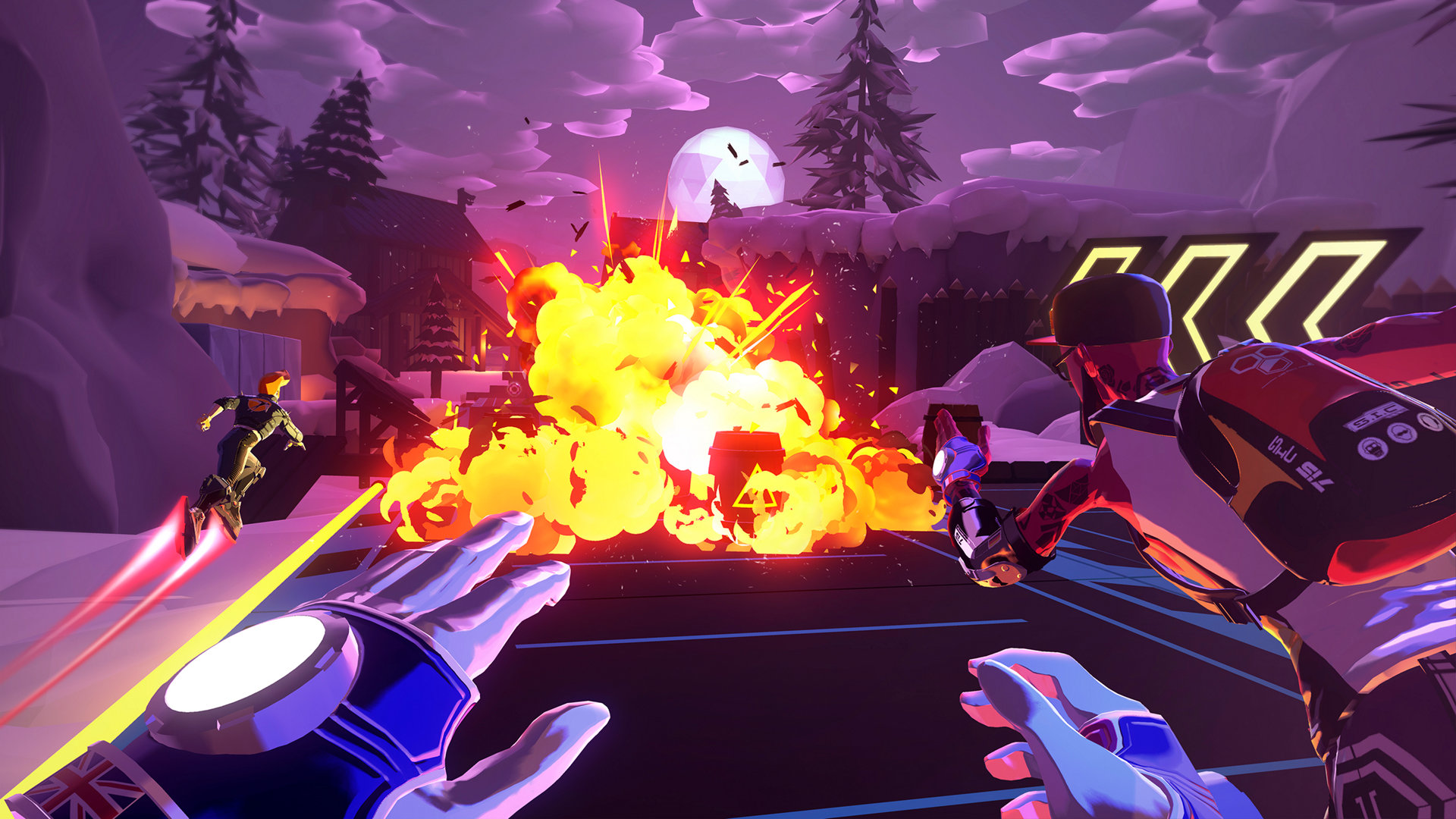 There were some times where the jumping wouldn't work exactly how I intended. I would fling myself in the wrong direction, but I don't believe it was the game's fault. It could have been me doing the motion in a certain direction or a momentary lapse in the tracking.

Sprint Vector works incredibly well, given all of the different mechanics at play. Subtle controls, like using the controller to control the angle of your drift around corners, mesh perfectly well with furious arm swings and swift jumps.

It's a testament to the power of great design in virtual reality that all of this works as well as it does. A lesser developer would probably struggle to accomplish even a fraction of what Survios has done here.

Something with this many moving parts should exhibit some sort of tracking issues or errors, but my experience was pristine.

For the price, you're also getting plenty of content. There's a wide selection of tracks and options for both offline and online play. A skatepark area also lets you have fun and experiment with the game's mechanics.

Combine that with leaderboards and varying difficulties, and you have an extremely cohesive VR experience.

At this point, you're probably waiting for the other shoe to drop. A PSVR game like this is bound to make you sick, right? Actually, the developers took a lot of steps to ensure this wouldn't be the case.

I never felt motion sickness while playing Sprint Vector. An option for click turning is there if you need it, but the game puts momentum within your control, which keeps you from feeling dizzy from all the motion.

The only downside, if any, is that Sprint Vector will make you sweat. For me, I thought it was a great workout, but not many people want to sweat inside their headset, and I can respect that.

For me, the wide selection of content and the pitch-perfect controls made this easily one of the best games I've played on PlayStation VR. 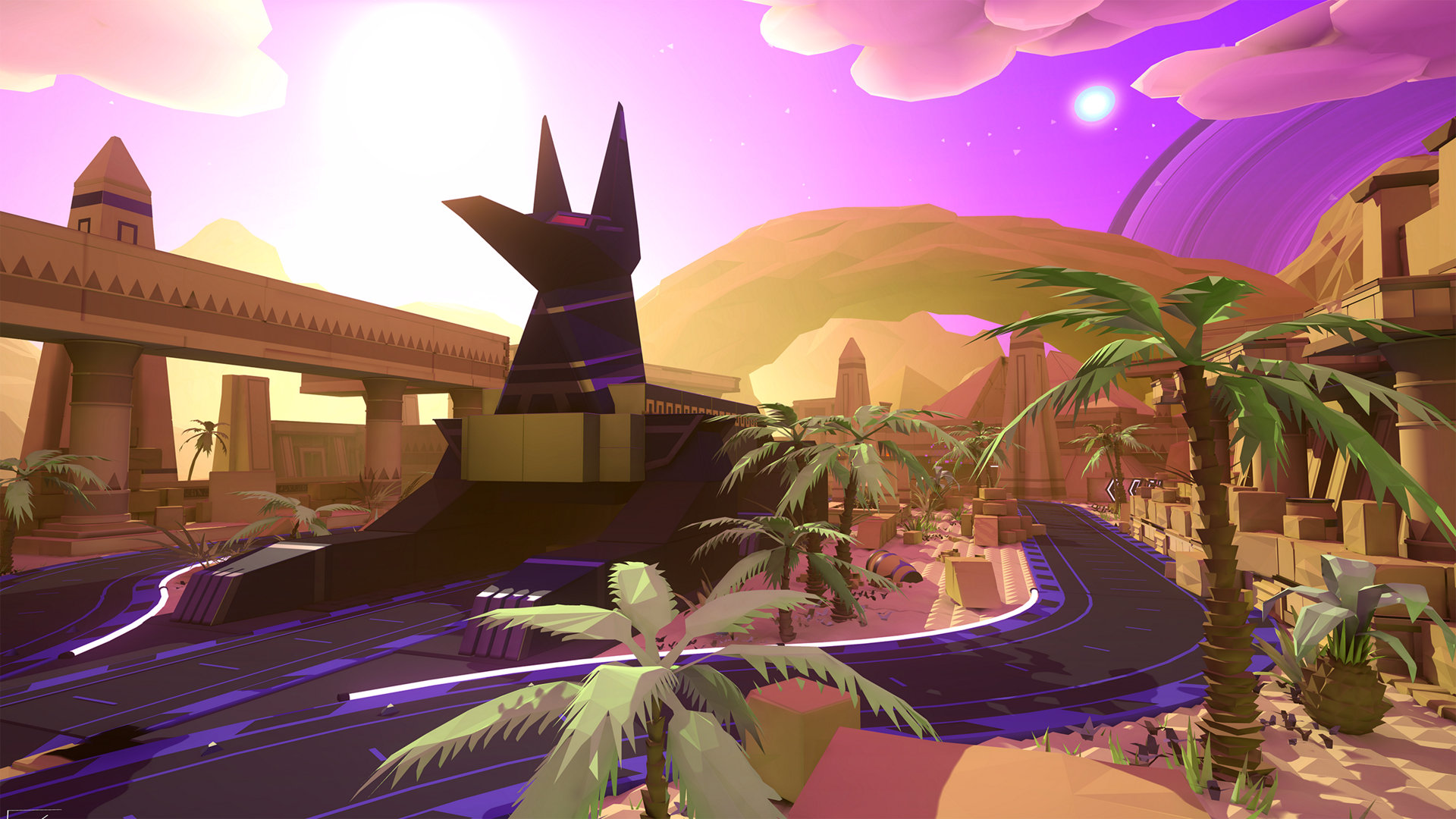 Playing Sprint Vector on PS4 Pro was a treat for the senses. The color palette is both varied and vibrant. The design of the game's environments make excellent use of colors to instantly capture your attention.

The various racers all have a unique style and personality in their design as well. Combine all of this with a buttery-smooth frame rate, and you have a perfectly polished experience in VR.

While some people may not want to sweat like crazy inside their PlayStation VR headset, anyone who doesn't mind a good VR workout should absolutely play this game. Even if you have a passing interest in VR and you want to see what it can offer, play this game.

Regardless of your reason, play this game. Survios is clearly a very talented developer. Between this and their prior release, VR owners can experience the best of what the headset has to offer.

A copy of Sprint Vector was provided to PS4 Experts for review purposes. The game was reviewed using PlayStation VR on PS4 Pro.