I’ve always been of the opinion that there’s not enough westerns in gaming. We need more titles set in the Wild West. Furthermore, I believe that westerns and horror go together like peanut butter and jelly. You can imagine my excitement then when I laid eyes on Ritual: Crown of Horns.

An undead bounty hunter, a twisted version of America secretly corrupted by a cult, and a witch who seeks to bring it all down by cleansing the ley lines that run through the very Earth beneath her feet? Oh yeah, I’m in. Time to find out if this weird western casts a spell on you, or if this brilliant premise burns out a little too fast.

Westerns Get Weird, and I Love It

The Wild West is bursting with potential when you combine the setting with other genres. Western horror, or “weird western” as some may call it, combines elements of magic, Lovecraftian horror, and all manner of things that go bump in the night with the more familiar tropes of western stories: revenge, life on the frontier, etc.

It’s a delicious combination when done correctly as it brings together the concept of exploring the unknown from both genres. In Ritual: Crown of Horns, this is done to great effect by placing it in a version of the Wild West replete with cultists, corrupted ley lines (the concept of energy highways that connect major landmarks around the world), astral projection, witches, rituals, and much more.

You play as Daniel Goodchild, a bounty hunter and a patriot sent to take out a witch by the powers that be. When you arrive, you find out that it’s an ambush. Things don’t go your way, and you soon find yourself resurrected by the very witch you sought to kill.

You’re nothing but a pawn, used up by a cult that runs American and disposed of like the garbage they perceived you to be. The Witch has brought you back because she’s planning a revenge story of her own, but she can’t do it without help.

She has a ritual that can cleanse the ley lines running across America, and bring down the corruption that has taken root. She’s vulnerable to attack while performing the ritual, so now you’re her own personal bodyguard.

I’m always up for a good story in games, but Ritual: Crown of Horns does offer the option to skip the text dialogue if you prefer to get into the action. It’s hilarious labeled as a “shut up” button. For those who like a little motivation behind their cultist killing, Ritual: Crown of Horns delivers a compelling world for you to explore via dialogue at the beginning of each mission and some lore in your journal at the game’s hub area: The Bloody Heartland.

It gets weird in all the best ways, with new characters quickly joining your cause in the first few missions. These people offer additional dialogue that’s entirely optional when you visit the hub area, but they also provide gear, guns, and spells as you’re able to unlock them or purchase them with currency from beating missions.

The story relies on the strength of its world and rides the premise well. In terms of an arcade shooter, it’s far more story and lore than you would expect. Compared to something more narrative focused, however, it doesn’t dive too deep into its characters beyond their admittedly awesome backstories.

There are also some story elements that feel like nods to our current world. For example, one level mentions a church where the cult that runs America worships their guns, going so far as to marry them. It’s not a game that tries to be political, but it’s hard not to see parallels between this alternate version of the Wild West and the world we live in. Intended or not, I enjoyed the almost satirical connections I could spot in the storytelling.

Given the game’s focus on arcade gunplay, the level of story here feels appropriate and the level of detail it does offer is a breath of fresh air in a genre that sometimes places story on the backburner.

Now for the main attraction: gameplay. Ritual: Crown of Horns wastes no time in testing your skills once you finish the opening levels. Played from an isometric perspective, the game bucks the usual control scheme you would expect from a twin-stick shooter.

Instead of furiously dodging waves of bullets and shooting at everything that moves, Ritual: Crown of Horns tasks you with being strategic in everything you do. Mobility is important, yes, but the game employs an aim button that immediately targets the closest enemy. You can switch your focus between enemies with the right stick, but ultimately you’ll need to pick and choose your targets carefully.

The ultimate goal of each level is to protect the witch while she performs her ritual. For the most part, enemies will relentlessly charge toward her and begin breaking down any obstacles in their path, much like a tower defense game (only in this case you’re the tower).

There are other enemy types who will rush you instead, so you’re not entirely safe. The game’s small to medium-sized levels usually give you some breathing room in the form of boarded up windows or blockages that enemies have to break through before they can reach the witch to deal direct damage.

It would have been cool if you could quickly gather resources to repair these things, but as it stands, once they’re destroyed you need to rethink your strategy. Fortunately, you’ll be working with more than just a six-shooter.

Each weapon comes with its own benefits in specific situations. The standard six-shooter, for example, paints a red skull on enemies when you aim at them for more than a second or two. Firing at this point will offer maximum damage.

The shotgun, by comparison, gives you a cone of damage that can take out multiple enemies if you position yourself correctly. The same goes for the crossbow, which can take out numerous enemies in a line if you get the shot lined up correctly. Switching between weapons also lets you reload them when they’re not in use, a strategy that’s very helpful when things get intense.

Power-ups like increased movement speed, health, and fast reload do appear, but they’re not something you can depend on. Instead, you’ll use souls you collect from fallen enemies to cast spells and turn the tide of the battle.

All of this comes together to create white-knuckle brawls that can quickly go from manageable to sheer chaos in the span of a few moments. The challenge is here, but Ritual: Crown of Horns smartly offers a way for you to catch up somewhat if you feel like a level is insurmountable.

For starters, there are multiple paths you can take through the US, giving you a chance to try another level if one proves to be too much. One of the characters in your hub will also offer challenge missions that let you replay old levels with new objectives to gain extra currency. This can then be used to buy new gear that gives you buffs in battle.

The systems in place here, particularly the style of aiming and the strategy behind the gunplay, make Ritual: Crown of Horns feel fresh beyond its unique premise. I would have liked to see more mechanics and enemy types, along with other types of levels beyond “protect the witch,” but this is all a desire to see this idea taken further since I enjoyed what I played a lot. 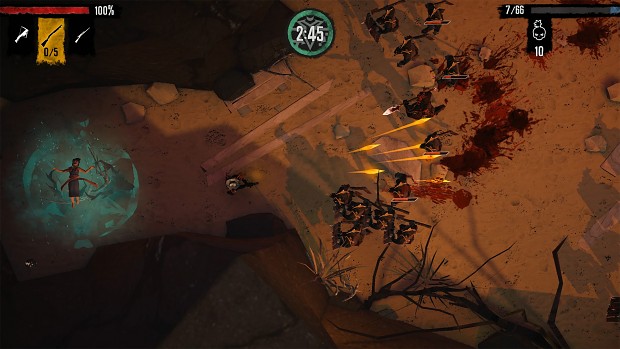 Ritual: Crown of Horns has a solid presentation overall, but it does have some gulfs in the quality of the visuals. The character portraits, for example, are excellently detailed and full of personality.

The environments themselves do offer some creativity, but the enemy designs could have benefited from more unique styles, especially given the potential of the premise. I would have liked to see more striking monster designs in the moment-to-moment gameplay that reflected the artistic style of the narrative beats.

The soundtrack is a high point for me, which again bucks the normal trend of twangy western themes for more modern rock ballads. These combine thrashing guitar riffs with sharp notes that give off that weird and horror-focused vibe. It meshes well with the gameplay and offers some pulse-pounding audio to match the chaos on the screen.

In the end, Ritual: Crown of Horns brings a lot of new and exciting elements to the table, particularly in the narrative and gameplay department. It’s relative polish, challenging difficulty, and slick presentation make this an idea I would love to see explored in further detail.

In the meantime, those challenges and the punishing difficulty will keep me coming back for more.

A copy of Ritual: Crown of Horns was provided to PS4 Experts for review purposes.