The horror genre has had an interesting journey throughout the decades, especially when it comes to gaming. What started as a focus on survival, a lack of defense, and limited resources, soon blew up into action scenes, guns, and all manner of different variations. Remothered: Tormented Fathers is the first game in a new trilogy that seeks to bring things back to basics.

With clear inspiration from Silent Hill, Clock Tower, and Resident Evil does this game do justice to those it seeks to stand beside in the hallowed halls of gaming horror? Let’s find out.

A Welcome Return to Horror’s Roots

Remothered: Tormented Fathers is a third person survival horror game with a focus on psychological horror specifically. You play as Rosemary Reed, a 35-year-old woman who seeks to uncover the truth behind the disappearance of a young girl named Celeste.

She believes the truth lies within the halls of Dr. Felton’s house, who also happens to be Celeste’s father. The game begins with Rosemary arriving at the residence, and things quickly turn from odd to downright terrifying pretty quickly.

The game’s story is portrayed through both cutscenes and in-game documents you can find to read more about the backstory. The story itself is fairly unique, with plenty of mysteries during the opening hours. What happened to Celeste, what illness plagues Dr. Felton, and why does Rosemary care so much?
The main character has a design that closely resembles a young Jodie Foster, specifically her character in Silence of the Lambs. Even the voice actress bears a similar voice. I actually really enjoyed the atmosphere and acting across the board. Rosemary is suitably terse and to the point, while others like Dr. Felton are appropriately creepy and reserved.

Given that this is the first game in a planned trilogy, you’re not going to get all the answers during the 4-6 hour experience. That being said, there are some satisfying revelations to keep you satiated until we hear about a sequel.

From a gameplay standpoint, Remothered: Tormented Fathers sticks to basics for the most part. Rosemary herself has no means of defense, save for a last-ditch item that you can carry one of at a time. That means that sneaking, hiding, and distraction are going to be your only weapons.

It’s true survival horror, which many people will like, but it also doesn’t particularly welcome anyone who isn’t a fan of the defenseless approach to horror. The gameplay loop here essentially involves searching the mansion looking for items that can be used to solve puzzles. These are indicated by a jigsaw puzzle icon, which is helpful for distinguishing between useable items, distractions, and last-ditch weapons like scissors or knives.

The enemy AI is pretty good at roaming the entirety of the environment, making it difficult to really know where they are at any time. That being said, getting spotted it pretty easy, and getting away is not. Enemies chase you ruthlessly, and even if you manage to temporarily break the line of sight, they may show up and rip you out of your hiding spot anyway.

When you are captured, you can escape using your last-ditch item to wound the enemy and get away. These can also be upgraded to enhance their duration by using them with other items in the environment. This is a unique mechanic that encourages exploration to ensure that you’re prepared if you get caught.

Of course, getting caught without any defensive items will result in a pretty gruesome death scene, which brings us to the save points. Remothered: Tormented Fathers relies entirely on save points, and there aren’t many of them. Dying will send you back to the last one you saved at, regardless of progress.

It’s an archaic system, but thankfully you can save as often as you want, provided you go back to the save point. Since they are so spread out, though, I would have appreciated an autosave that kicks in after any kind of significant progress.

From a gameplay perspective, this is pure survival horror. The tension is palpable, the enemies are convincingly terrifying, and there are several different quality of life improvements like icons for item types, and upgradeable defensive items for when you get caught. You can also choose how you open doors to keep quiet when entering new rooms, or barricade certain doors to slow down your pursuers.
It doesn’t do a lot to further the genre, but what’s here is firmly rooted in the classics of survival horror, so fans of the genre will absolutely enjoy Remothered. 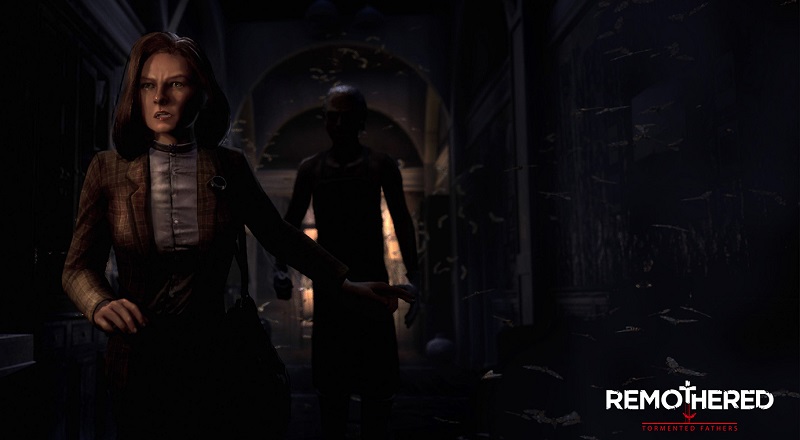 Despite being developed by a small independent studio, Remothered: Tormented Fathers has a pretty impressive presentation. There’s a respectable amount of detail in both characters and environments. The mansion especially feels very lived in, which adds a lot to the atmosphere.

Voice acting is solid across the board, but animations and lip sync are sometimes a little stiff during cutscenes. The sound design does a good job of conveying dread and tension, but I did find it difficult to use the sounds I heard for the purpose of judging where and how far away the enemy was.

I would have liked to have more detailed audio for the purposes of gameplay, as that would help the player understand what they’re working with. Overall, Remothered: Tormented Fathers is a strong homage to the survival horror genre with an intriguing story and solid mechanics.

For the sequel, I would like to see the developers further innovate on the genre by introducing their own fresh elements, such as the ability to upgrade your defensive items. Until then, horror fans should check out the first chapter in this trilogy.

A copy of Remothered: Tormented Fathers was provided to PS4 Experts for review purposes