PlayStation VR has a lot of different options for gamers, but it doesn't have a ton of party games. Quiz Night Tonight! is here to fill that gap with a single and multiplayer trivia game that offers two different modes and a couple minigames to break up the questions.

Does this game test your knowledge with varied and interesting questions, or does is it too trivial to be worth your time? Let's check it out!

Quiz Night Tonight! has two different game modes that can be played both online with other VR owners, and offline with players on the social screen.

The first mode, Trivia Night, has you standing in front of a podium, surrounded by the other contestants. Above you, a giant screen shows the audience's view of the stadium and the current scores.

Questions appear on the podium in front of you and give you several seconds to read them before the answers open up. The faster you answer, the more points you'll receive if you're right. Input is simple regardless of your controller choice (DualShock 4 or PlayStation Move), and just uses the face buttons.

If you're playing offline, you'll go through the questions until the end of the match and scores will be displayed then. If you're playing online, the round is broken up by a couple minigames between bouts of questioning.

One minigame has you throwing futuristic balls at targets and through a hoop. The other minigame places Tetris-like puzzle pieces beside you and asks you to place them into slots in front of you before time runs out.

They're actually pretty fun minigames, but there's only two of them. Having more to choose from would have been cool, but they're a nice addition nonetheless.

The other game mode is Race of Knowledge. In this mode, you are a colored game piece on a giant board. Answering questions quickly and correctly moves you forward several spaces. Being slow or getting it wrong results in less moves or none, respectively.

This is pretty simple, but it's fun to see other players eat your dust as you hop your way to victory on the game board. Prior to the game's launch, there was a small issue with repeating questions, but this was remedied in the day-one patch.

The questions themselves fall into a wide variety of topics, and while some will probably be way outside your interests, the mixture is varied enough where I always felt like I knew something during each round. 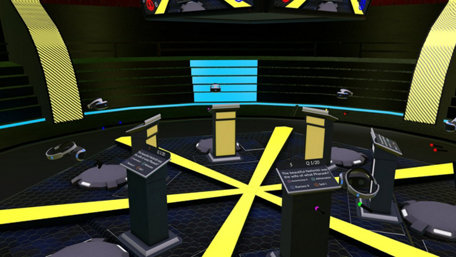 One of the things that could have killed Quiz Night Tonight! is the legibility of the text in VR. Some games have sharper text than others, but Quiz Night Tonight! has a nice size and color scheme that makes it easy to read and answer the questions, even inside of the headset.

Unfortunately, this isn't entirely the case for players on the social screen. For other players sitting beside you, the question looks fine on the TV, but the answers are placed inside of semi-transparent boxes that results in the text blending into the background a little more than I would have liked.

It's not always an issue, and many people will probably play the game online where the issue is gone entirely, but I thought it was worth mentioning for those who are doing the local multiplayer. The minigames can also be played separately by yourself, but do not trigger in local multiplayer modes.

As far as graphics go, the game is simple, but works well in VR. The depth gives you a nice sense of place and being able to see the hovering headsets of your fellow players is a cool touch.

Voice chat isn't available at launch, but will be implemented shortly after in a free patch, so you can expect that feature as well for the multiplayer.

Overall, Quiz Night Tonight! is a solid little trivia game. More minigames would have been cool, and while it doesn't have any bells or whistles in the presentation, it does trivia pretty well.

It's got a solid, affordable price point, so if you're interested in doing trivia online or with your friends in VR, you should definitely check it out.

A copy of Quiz Night Tonight! was provided to PS4 Experts for review purposes