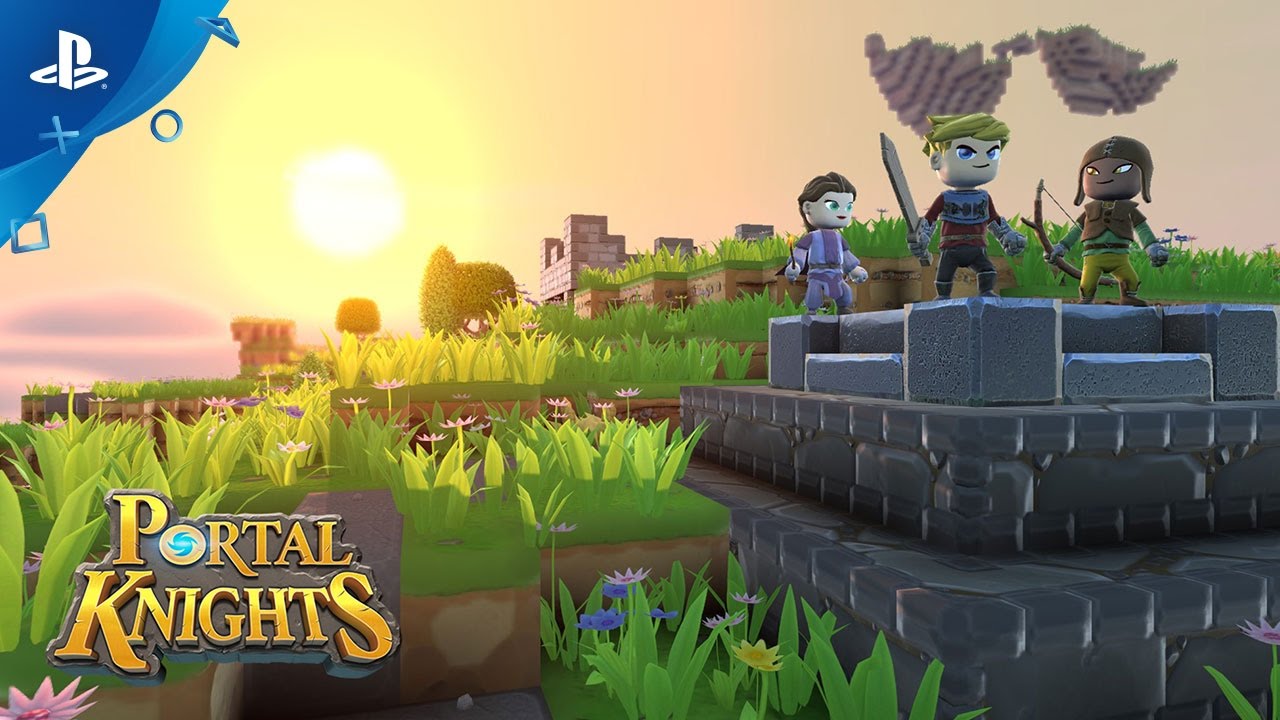 It's hard to define the crafting/exploration genre. Most people just say that "it's like Minecraft, but..." and while that works, it's not fair to place a game like Portal Knights under that umbrella.

Unlike other games that strive to do exactly what Minecraft does, Portal Knights forges its own path with a sense of direction, purpose, discovery, and a sprinkling of RPG elements for good measure. While you may find the crafting, resource gathering, and exploration familiar, are these new elements a gateway to the formula that this genre so desperately needs, or is this game a portal to nowhere? Let's find out!

A Fractured World With a Sense of Adventure

Portal Knights immediately takes a different approach to story and world building that most would not expect from this type of game. Normally, you have this gigantic world that's procedurally generated and stretches off in every direction.

Portal Knights bucks this trend by introducing us to an event called "The Fracture." This calamity shattered the world into pieces, and the only way to travel from one piece to another is through, you guessed it, portals.

This premise throws us into a world where we get bite-sized islands floating amongst a shattered world. Each island has its own biome, and apart from story-specific islands, all are uniquely generated and randomized.

It's a nice balance between structure and mystery. While set islands will always be the same for story and boss fights, the others are always a mystery. One island may be a grassy knoll with mines and caves, while another could be a desert wasteland that houses mysterious dungeons beneath its surface.

The constant change of scenery, peppered with some progression in the form of boss fights and quests from NPCs, makes Portal Knights something that offers far more purpose and direction than its ilk.

As someone who needs purpose in my gaming, this was remarkably refreshing, but all is not perfect. While there is far more here than I expect from these types of games, I would have loved to see more.

The story has an interesting premise, but it's not present enough to be a huge influence. The NPCs have some interesting quests, but I would have loved some light lore surrounding the ancient ruins and portals. With such a cool premise, a more involved story seems like a missed opportunity.

Even so, what we have here is the best attempt I've seen at balancing player freedom in this genre, with purpose and direction. It works really well in making Portal Knights stand out.

RPG Elements Make For a Welcome Addition to The Formula

Portal Knights has everything you would expect from a crafting/exploration game. You can break apart blocks in the world, along with trees, bushes, and anything else you come across. All of these will yield resources like seeds, fruit, cotton, wood, stone, and so on.

The user interface for crafting is about what you would expect, but it can take a little getting used to. Navigating menus works fine, but when playing split-screen the text can be painfully small on a large TV.

It's not clunky by any means, but crafting can be somewhat cumbersome in the beginning as you learn the menu's layout. One element I did like, was the shortcuts in your toolbar. The four d-pad buttons can be mapped to items in your tool like weapons, torches, or potions and can be equipped or used instantly.

Little touches like being able to plant seeds and grow plants is pretty cool as well. Building or constructing works as you would expect, but the cursor can sometimes blend into the environment, making it difficult to know where you're placing blocks.

All of these standard features are here and they work fine. If this was where Portal Knights stopped, it would be an okay game, but thankfully this is just the foundation.

Portal Knights wisely adds a suite of RPG elements to the equation that makes it really fun to play. When you level up, you can put points into standard traits like strength, dexterity, intelligence, and so on.

From here, you can then choose various talents from a skill tree that unlocks additional tiers as you level up. Finally, your class can range between Warrior, Mage, or Archer, giving you different options for weapons and armor.

All of this brings us to the combat, which is excellent for this genre. You can use a lock-on for enemies and dodge between attacks. Ranged weapons feel great such as wands for mages or bow and arrow combinations for archers.

It's a step above the typical one-note swinging animation we've come to expect and shows a focus on combat that compliments the RPG elements really well. It's not revolutionary combat, but it adds more depth than you would expect.

Traveling between worlds involves crafting portal blocks that you use to build your gateway, which is an exciting element to have as you progress onto the next island in your journey.

The only downside to the migratory style of level design, is that the game doesn't encourage a lot of construction or building. You can do it, and you can even set your own "home" island, but there's not a lot of incentive to settle down when there's so much more waiting out there. Any new island could easily be better/more interesting than the last.

More importantly, it could hold better gear and more quests. In this regard, the RPG elements are almost at odds with the other tenants of the genre, which usually encourage grand creations over exploration and progression.

Even so, the game doesn't limit you to one or the other. Just don't be surprised if you're more interested in going forward than sticking around to build yourself a castle.

On the subject of single player vs multiplayer, I highly recommend playing Portal Knights with a friend or friends. You can play split-screen on a single system and also go online with up to 4 players in total.

Playing Portal Knights by yourself isn't ideal. The game encourages teamwork and the enemies can quickly become overwhelming for a single person. Bring friends, it's dangerous to go alone.

While Portal Knights does employ the block-based presentation of others in the genre, it goes a step further and adds some excellent splashes of color and detail to the world. Instead of brown blocks with a layer of textured green for grass, blades of grass top the blocks.

Trees and bushes have unique colors and fruit growing from them, while treasure chests stand out, and magical blocks glow with a mysterious blue light.

The level of detail and color in the presentation really makes Portal Knights an absolute joy to explore. The upbeat soundtrack also adds a good atmosphere to the various areas.

The characters themselves lack the same amount of detail, but a variety of facial features and options allow you to make a unique avatar nonetheless.

I did enjoy the different types of enemy designs, some of which were pretty unique, even for a seasoned RPG veteran. Overall, Portal Knights is the shot in the arm this genre needs to evolve and grow.

Minecraft may have started this whole craze, but Portal Knights has proven that there's far more depth to be had in this type of game. The solid crafting mechanics, mixed with the RPG elements makes for an excellent evolution and a step forward for the genre as a whole. It also proves my personal theory that everything is better with portals.

If you're burned out on the rest, take a portal to paradise and give Portal Knights a shot. Just remember to bring some friends for the best possible experience.