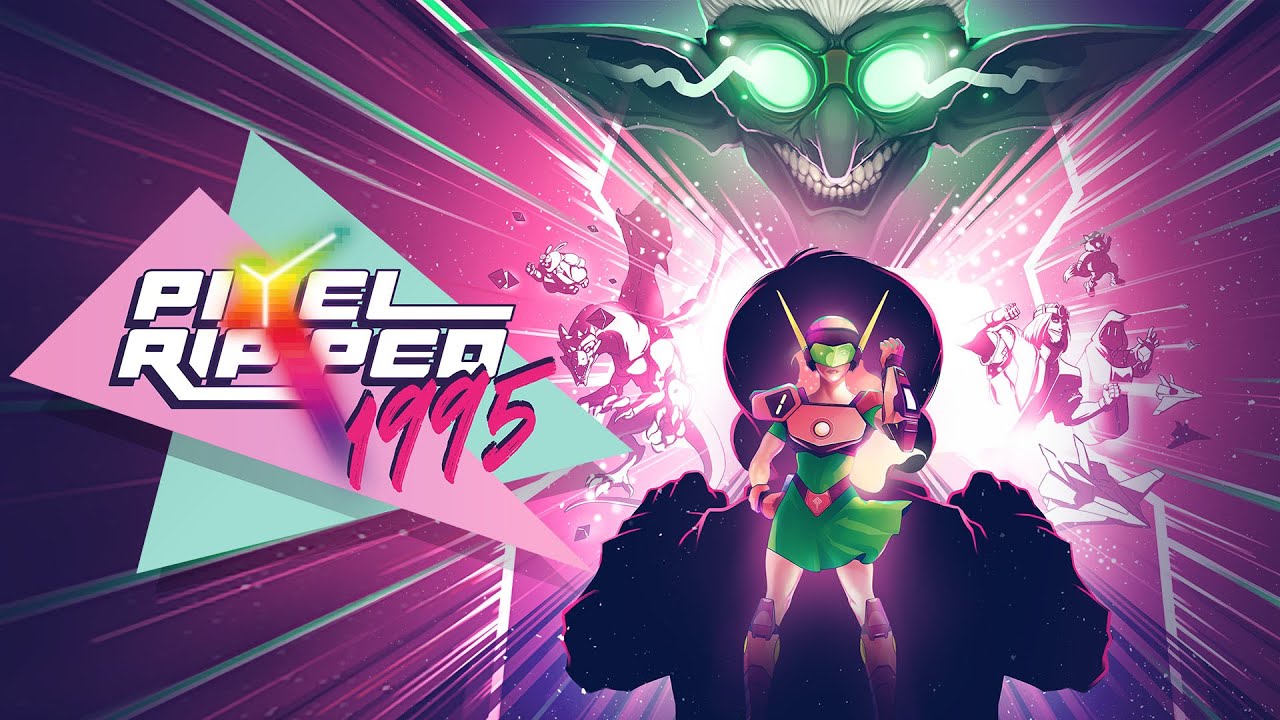 As a person who grew up in the 90s during the days of the Sega Genesis and the SNES, those days soon gave way to the N64 and the original PlayStation. Honestly, I was hooked from the moment I first played Vectorman on my Genesis (one of my earliest gaming memories). Having been a gamer nonstop since those days, nostalgia works pretty well on me. That’s why Pixel Ripped 1989 struck a chord, with it’s combination of classic gameplay and a game-within-a-game style for PSVR.

Now we have the sequel, Pixel Ripped 1995, which brings the series into the era where I first became a gamer. Needless to say, it’s got the nostalgia factor going for it. The real question is whether this formula still feels fresh in a sequel, or if this series needs a reboot. Let’s find out!

A Game After My Own Heart

Being someone who loves PlayStation VR and is also susceptible to any and all forms of nostalgia, Pixel Ripped 1995 feels like it was made for me. The first game in the series grabbed my attention with its unique premise and hybrid gameplay, but the sequel has me invested for entirely different reasons; namely that it feels like it was pulled straight from my childhood.

Playing as the hero from the first game, Dot (who is modeled after Creative Director Ana Ribeiro and her awesome cosplay), you once again find yourself besieged by the forces of evil, who have come for the fabled Pixel Stone.

To save her virtual world from destruction, Dot teams up with David, a nine-year-old boy in 1995 who happens to be the best gamer around (based on his high score). With this premise in mind, the lines will blur between the world of Dot’s game and David’s world.

This game-with-a-game formula is a great fit for VR because that extra layer of immersion is key. While boss fights mix things up significantly, the standard gameplay has you playing as David as he sits in front of a screen holding the controller.

The environment around you is typically alive and active as well. The opening level has you in your living room, dressed in Dot-themed pajamas as your mother talks on the phone and the neighborhood bully heckles you from the open window to your left.

On the screen is our hero, Dot, in an isometric action game not unlike the classic Zelda formula. You’ll control the game directly with your DualShock 4, but you can also move around to manipulate David’s virtual hands. This is crucial because, in this opening level, your mother will try to turn off your game (as non-gamer moms tend to do, not knowing the consequences of such actions).

You’ll need to take your hands off the virtual controller and use your DualShock 4 to grab a nearby toy gun and cause a distraction so she leaves you alone. This type of interaction between the game David is playing and his own world is the formula that makes Pixel Ripped 1995 far more than just a nostalgia simulator.

Though the game’s length is a little on the short side with six chapters in total, the sheer amount of variety on display here is amazing. My favorite level in particular was the second one that involves a rental store (reminds me of my days hanging out at Blockbuster), two rival game consoles, and a brilliant gameplay mechanic that requires you to switch between the two in order to progress.

I think one of the things that makes Pixel Ripped 1995 so excellent from a story and writing perspective, is just how much you can feel the passion behind the project. The jokes in this game, from playground rumors of fake secrets, to dad jokes, to crossovers and homages to other titles are all expertly written by someone who truly loves the world of gaming and the culture of it in the 90s.

I regularly found myself laughing and grinning from ear-to-ear as the game shifted from action, to puzzles, to shooters, and even a solid brawler. All of this is paired with elements that you’ll need to watch out for in the “real world” beyond the digital screen in VR.

Another thing I particularly liked about Pixel Ripped 1995 was the overarching story, which tells the tale of a family divided by gaming, but ultimately brought together by it. It’s nothing super heavy or deep, but the way everything plays out warmed my heart.

Beyond the length (which isn’t too bad, but you’ll be finished in a handful of hours), my only other issues with Pixel Ripped 1995 are fairly small. The things that caused me the most grief was the transition from holding the digital controller, to interactive objects, and back again.

An example would be a later stage where you need to quickly reach for a remote fairly often depending on what’s happening in Dot’s game. I loved this mechanic, but once I put the remote down, I would often have to pull the DualShock 4 back to get David’s virtual hand to grasp the controller.

Without that crucial step, I couldn’t control Dot in the game on the virtual screen. Given the precision timing of everything, this led to some frustrating deaths. I think it would have been better if the hand always snaps back to the virtual controller when you let go of the trigger and drop whatever “real world” object you’re interacting with.

This actually led me to some serious confusion in an earlier boss fight where I had to throw bananas as David. I couldn’t figure out why Dot stopped attacking after I threw one of the yellow fruits. It wasn’t until I saw that my digital hand was still extended that I realized I needed to grasp the virtual controller.

I had some fleeting issues with Dot seemingly passing through a solid surface in a later level that takes place in a castle, but it only seemed to happen a few times. I imagine it was the collision detection acting up because they were solid stone surfaces and not the other kind that crumble beneath your feet.

Circling back around to the positive side of things, I really did love the immersion that Pixel Ripped 1995 offers in PSVR. A funny story from my time playing occurred in the first level. I was filled engrossed in the moment as David, even leaning forward with my headset on as I navigated a gauntlet on the digital TV screen.

Just then, David’s dad comes bursting through the front door with a Christmas tree. You would think I was playing a horror game because his sudden appearances shattered my concentration so completely that I screamed out loud and recoiled in my chair. I seriously thought someone was breaking into my house.

What a moment, though, and a perfect example of how a well-crafted VR experience can trick your brain into thinking its real, regardless of the graphics or detail. I love that developers can still create crazy moments like this so far into the PSVR’s life. It makes me hopeful for the future of VR.

A Superb Blend of Virtual Environments Pixel Ripped 1995, in many ways, feels like a time machine. The attention to detail in the virtual games, the environments, and the writing all feel absolutely authentic to the time period. As a gamer who grew up in this golden age of gaming, the nostalgia here was off the charts.

I also have to give a shout out to the music, which is catchy, period-appropriate, and manages to feel like a classic soundtrack despite being made in 2020. Loved the audio from top-to-bottom.

Eagle-eyed readers will note that I am giving Pixel Ripped 1995 the same score I gave the original. I think this is the better game, but both are absolutely worth your time and money. Much like the passage of time from 1989 to 1995, my standards for PSVR scores have changed significantly as new experiences come out for the platform.

This score reflects that. In the two years that have passed since the first entry in the Pixel Ripped series, the standards for VR have gotten higher. The attention to detail, the superb immersion, the pure nostalgia, and the clever game mechanics that highlight the strengths of VR all contribute to the fact that, despite the bar getting higher, Pixel Ripped 1995 easily rises to the occasion.

Let’s keep this train rolling! I would love to see Dot’s adventures continue into the PS1 or PS2 eras. Anyone with a love for the classics should absolutely check out both games in this series. This is a masterclass on how to bring retro concepts into the modern era.

A copy of Pixel Ripped 1995 was provided to PS4 Experts for review purposes.