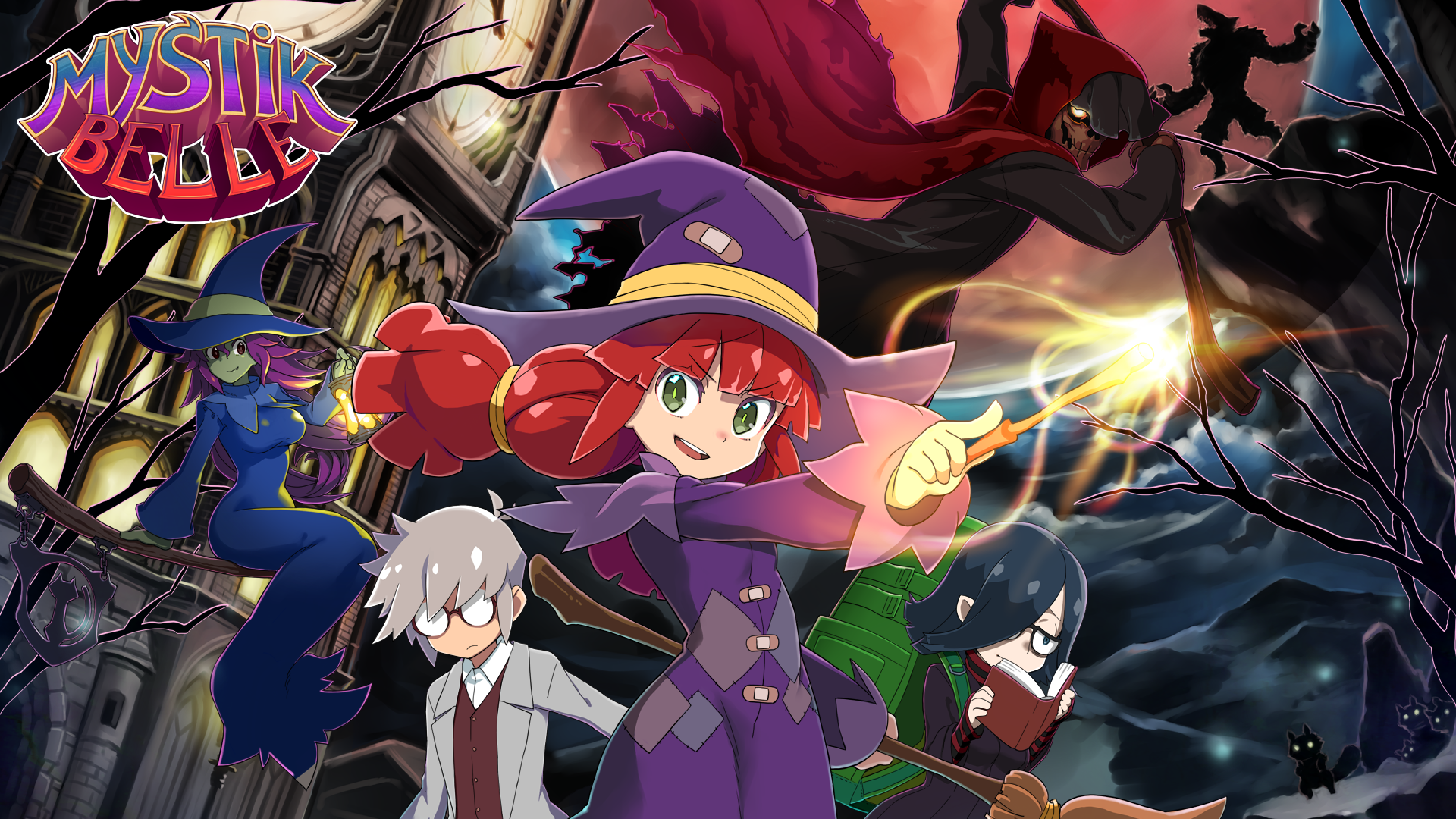 It's no secret that a lot of indie titles these days have adopted the sub-genre label "Metroidvania" and embraced the concept of a massive map gated by upgrades and filled with secrets. It's a tried-and-true formula, but with so many on the market, it takes a unique spin to stand out.

Mystik Belle seeks to do exactly that by combining the atypical formula with puzzle elements reminiscent of a point-and-click adventure. Does this combination work, or does this spell fizzle out?

A Conspiracy to Sabatoge the Walpurgisnacht Brew

During a brief opening cutscene where Belle is practicing her fire magic, someone sabotages an ancient and sacred ritual. Being in the wrong place at the wrong time, Belle is accused of ruining the ritual.

She faces expulsion unless she can gather the ingredients to re-create the Walpurgisnacht Brew. The school is a massive maze filled with all manner of threats, so your journey will not be an easy one.

As you explore Hagmore School of Magic, you'll come across a variety of characters to interact with. In some cases, you'll offer assistance, but in other cases, you'll distract or otherwise manipulate the situation to turn in your favor.

Beyond the initial premise, Mystik Belle takes the usual approach to Metroidvania and lets the story take a backseat. There are some cool characters and bosses to discover, along with a host of interesting items to use for your puzzle solving. For the most part, it's what you would expect from the story in this type of side-scroller. By default, the controls and movement in Mystik Belle pretty slow and cumbersome. Thankfully, there's an option in the menu to speed up everything by 25%, which absolutely helped alleviate the issue for me.

I mention this first because it's one of the first things I did when I booted the game up. With that out of the way, you can begin exploring the winding halls, precarious platforms, and interesting items that the school has to offer.

Environments have a good amount of variety to them, with a mixture of vertical areas and long corridors. Some light platforming also mixes things up. Enemies will respawn each time you leave and enter a room, but you'll be able to pick up their patterns pretty quickly.

Your main attack is a fireball spell that becomes more powerful as you level up. XP is gained during combat, but you'll lose all of your current XP if you perish. Otherwise, levels bring a health upgrade and usually some increase in power for your ranged fireball attack.

Enemies who get too close can be whacked with your broom as well. Combat isn't too deep, but there is some variety in your strategy as you encounter different enemy types.

The in-game map is incredibly simple, offering little guidance or help in marking specific areas. There are portals you can use to jump from one area of the map to another, but beyond showing the shape and connection of rooms, the map offers practically zero assistance.

As a result, you will most certainly get lost in Mystik Belle. It took a while, but I started to get a tertiary understanding of where specific rooms were, but many of the locations are offshots from a vertical area that has doors lining both walls, so areas like this became confusing very quickly.

Mystik Belle's most unique mechanic both helps and hurts in regards to your exploration. You'll come across puzzles and items as you explore, and you'll need to use specific items to solve them.

With limited inventory space, you'll need to carry only what you think you'll need. The worst feeling is when you encounter a puzzle, only to realize you left the item you need in a stash across the map. While there are several locations for you to stash your items and switch our your inventory, the fact that these aren't marked on your map makes it difficult to get the item you need and make your way back.

I did a lot of backtracking and aimless wandering between puzzle solving as a result of the vague map and limited inventory space. Repetition started to set in, but I have to admit that I always felt a burst of energy and excitement when I finally solved a puzzle I had been stuck on.

It's mostly about combining items with situations and understanding what is going to work best in any given scenario. Even with a strong understanding, though, you'll still find yourself facing down a puzzle where the item you need is in a stash several rooms back.

Despite these qualms, I really like the combination of puzzle solving and Metroidvania-style design. A few more quality of life options like stashes marked on your map or the ability to set a waypoint so you can find your way back would have been very welcome, but the lack of them isn't a dealbreaker.

Simple combat works well, especially when you hit the fun boss encounters, but the true star of the show is the unique combination of point-and-click puzzle solving with the side-scrolling design of a Metroidvania. 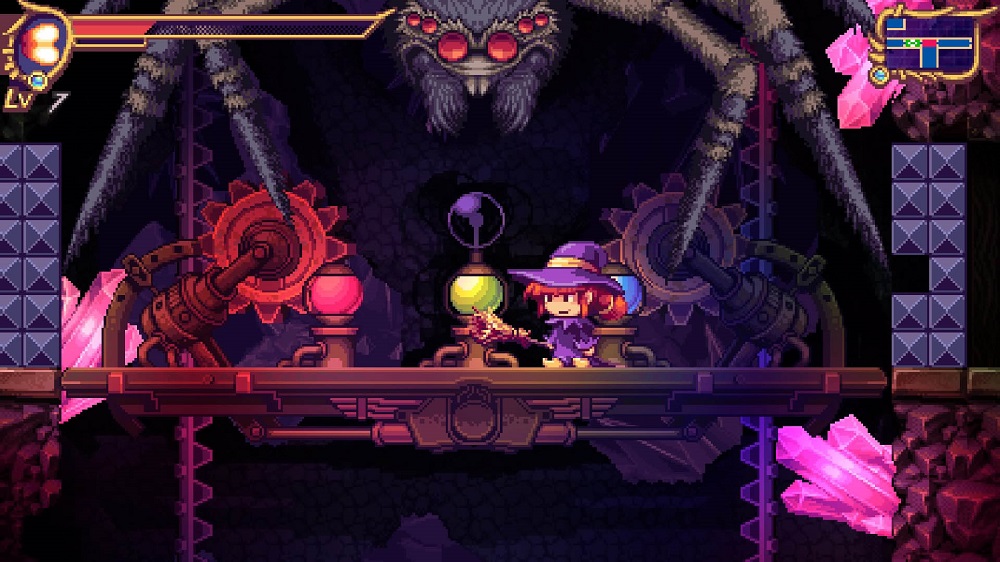 The presentation in Mystik Belle is decidedly retro, but it also has a lot of color and detail. Belle, herself is a quirky and cute character with fiery red hair and a striking purple outfit. Her broom and wand combination is also an endearing set of weapons.

Environments and enemies have smooth animation, with plenty of detail to backgrounds and characters. It's a wonderful marriage of strong art direction and retro style.

The soundtrack is an eclectic mixture of classic retro sounds and synthetic beats that brings to mind a wonderful era of gaming. It's upbeat, with strong melodies that carry across the bubbling sounds beneath.

In a world filled with Metroidvania games, Mystik Belle stands out by being a unique twist on the genre. It's not perfect, and repetition will set in as you get lost finding your way back to that puzzle with the item you wish you had to begin with.

Despite these small complaints, it's certainly worth your time.