Bullet hell shooters are often played from an isometric perspective, in order to see the true scope of everything flying at you, but MOTHERGUNSHIP is changing things up by switching the perspective to a view.

With a host of gun parts and the ability to build incredibly complex methods of destruction, does MOTHERGUNSHIP offer enough to bring you in and never let you go? Let’s find out!

MOTHERGUNSHIP is the spiritual successor to Tower of Guns, a game that I originally played when it was a free title on PlayStation Plus. While that game was interesting, it didn’t grab my attention the way the developer’s newest title does.

It all starts with a great sense of style and humor. MOTHERGUNSHIP wholeheartedly embraces a 90’s sci-fi approach and doesn’t hold back on the snappy comments and cheesy humor. Even though the story itself is not very prevalent or extremely well developed, the constant quips go a long way towards keeping the experience light and fun.

I especially enjoyed a joke early on involving a data core and a virus that caused ads to spawn endlessly in the game’s hub area. It’s good fun, and it plays well into the game’s over-exaggeration of the shooter genre.

Which brings us to the gameplay. MOTHERGUNSHIP combines ultra-fast movement in the vein of shooters like DOOM and Unreal Tournament, with the ability to build your own guns from scratch and test your skills in a roguelike environment.

At the beginning of each mission, you’ll have the opportunity to take a select number of weapon parts with you. While you can choose anything, it’s advisable that you bring the right parts to build at least some sort of weapon. This would include a base and a barrel, but modifiers can also boost your potential starting weapon.

Once you're in the level, you’ll have access to a terminal where you can construct your weapons using a simple, but intuitive interface that lets you add or delete parts with only a few button presses. The game will also prevent you from creating anything that won’t work, so forward-facing barrels are a must.

Beyond those small concessions, the game will let you run wild, but it’s going to take some time and skill before you’re building weapons that fill the screen. If you perish during a run, you’ll lose all of the parts you’ve collected, along with the ones you brought.

Thankfully, the game has received online co-op through an update after launch, so your chances will be a lot better with another player at your side. If and when you perish, you’ll become a stationary gun on your partner’s shoulder, thus giving you a new lease on life in the form of a reincarnated gun. If anything, it beats spectating for the remainder of the level.

To keep the balance in check, your weapons will also consume more of your ammo meter depending on how robust they are. This meter charges over time, but you have to consider that you’re holding a gun in each hand, so both will be draining the same meter.

Between the increasing number of slots, barrels, weapon types, and modifiers, there’s a huge amount of customization at play here. There’s something insanely satisfying about wielding a blaster in one hand that also fires rockets while wielding a machine gun in the other hand that also fires an energy stream. It’s chaos in its purest form.

While the game has a nice amount of content and randomized levels, the game doesn’t have a lot to offer once the credits roll, and the ending is pretty abrupt. Levels do have some variety to how they look and include special rooms like mid-level shops or dice rooms that offer better rewards in exchange for handicaps or heightened challenges. That being said, things will start to look the same after a while, even if the layouts are always different.

Despite these things, the developers have been adding new content for free, including the aforementioned co-op, so there’s no shortage of things to shoot at, which makes MOTHERGUNSHIP a success from a gameplay standpoint.

It delivers on the promise of a fully customizable arsenal, but the roguelike elements will ensure the climb to victory isn’t as easy as you would think.

Fast, Frantic, and Most Importantly, Fun 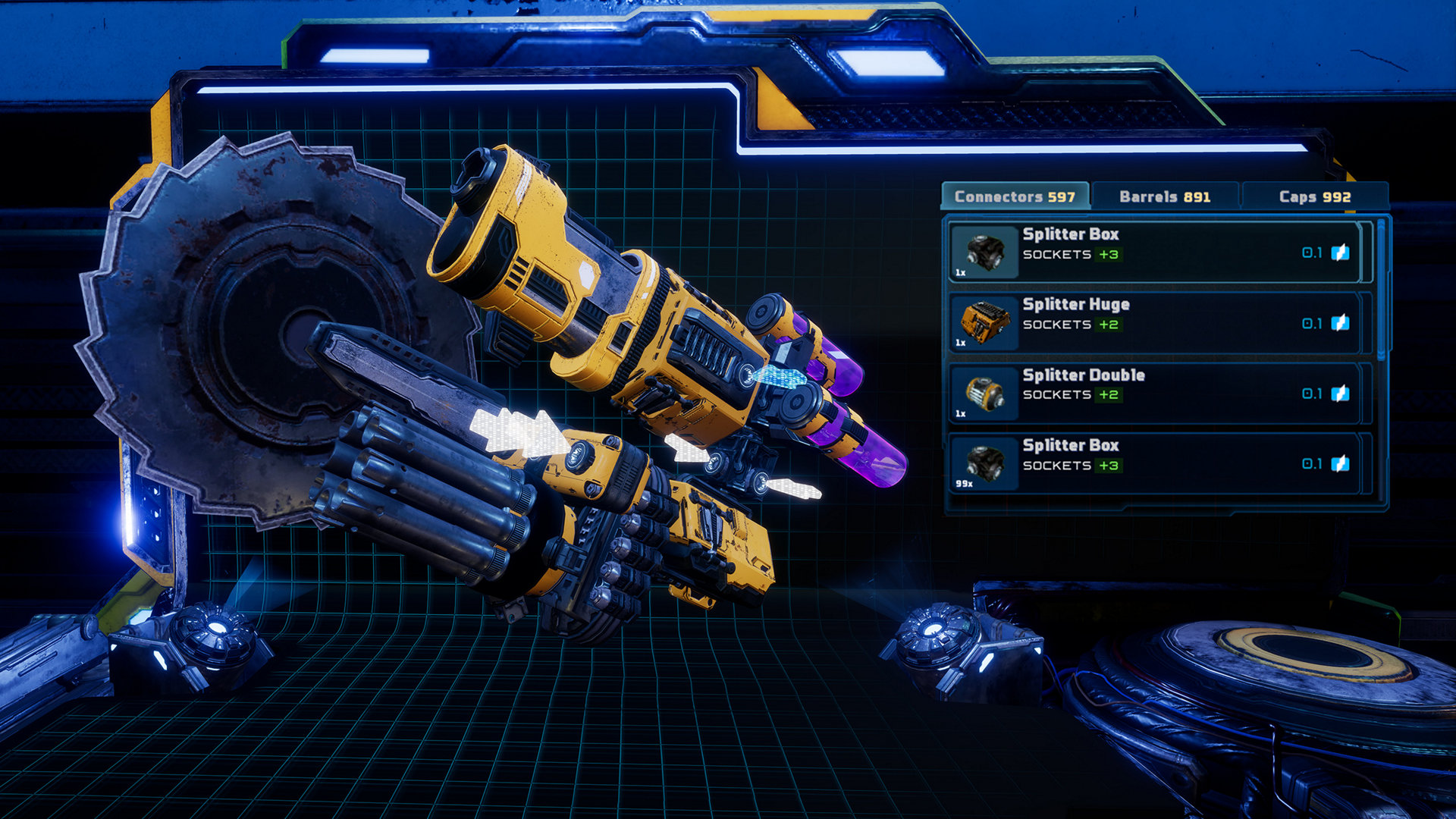 MOTHERGUNSHIP is a game that lives or dies based on its performance and controls. The game runs at a buttery smooth framerate and the controls feel both tight and responsive. While you start with the ability to jump three times, you can boost this up to forty times through upgrades, so the movement is very flexible.

The sleek sci-fi style looks great as well, even when you have bullets flying at you from every direction. Fans of bullet hell shooters and those who enjoyed Tower of Guns should absolutely give MOTHERGUNSHIP a shot (pun intended).