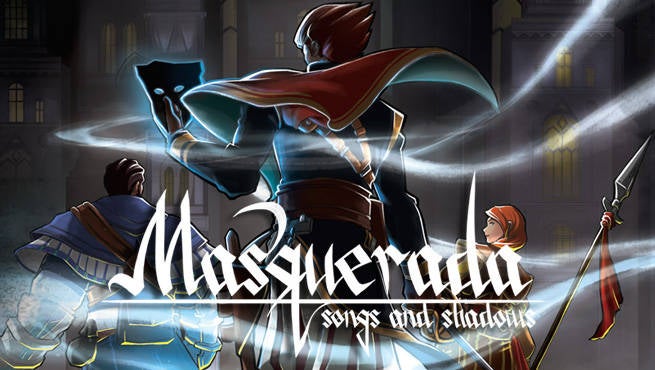 For those who are looking for expansive worlds and in-depth stories, RPGs are the ultimate fix. The only problem with them is that many last 20-100 hours or more. When I was younger, I relished in these types of games, but as I grew older, I looked for more concentrated experiences where I could find them.

Masquerada: Songs and Shadows is a new RPG for the PS4 that has a unique world and lore, combined with a tight and linear story that keeps things moving along. At around 10-12 hours, it's a concentrated story fix with plenty of twists and turns. Should you take a look behind the mask? Let's find out!

Masquerada: Songs and Shadows presents a unique world that immediately pulled me in. The primary inspiration is both European culture and the Venetian era. The streets are lined with tents and markets, while characters dress in eloquent outfits and elaborate costumes.

The primary source of intrigue in Masquerada: Songs and Shadows, are the Mascherine, which are masks that resemble the kind you would see during a classic masquerade ball. These masks have the mysterious power to bond with a person and imbue them with control over the elements.

The ones who wear these masks, known as the Masquerada, are an enigmatic bunch. They live lavish lives of wealth and are adored by all those around them. Meanwhile, the Contadani represent everyone else. They are the peasants who dream of one day donning the masks and becoming magical warriors themselves.

There’s a civil war going on though, and it all revolves around these masks. The Maskrunners are on the opposite side of the conflict, stealing Mascherines to fight back against oppression and the establishment.

To top it all off, the Mascherines are dwindling in number, and no one knows how to create more. Tensions are high as the main character, an Inspettore named Cicero Gavar, comes back from exile to help solve a mystery and earn enough coin to support his family.

If all of that sounds interesting, then you’re in for a real treat with Masquerada: Songs and Shadows. The game has an excellent style of writing that perfectly channels the lofty tones and vernacular of the Renaissance era that we all know and love.

Characters speak with an almost Shakespearean level of eloquence that I absolutely adored. It adds to the overall atmosphere and solidifies the Venetian-styled world that the game creates. The immediate story in front of you is always fully-voiced with excellent actors across the board.

Cicero himself is an excellent character who evolves across the course of the tale in profound ways as he slowly unravels mysteries and conspiracies alike. Masquerada: Songs and Shadows brings a tightly paced story that isn’t afraid to twist and turn on a whim.

I absolutely loved this, but it did come at a price. Much of the game’s lore and deeper meaning is hidden away in codex entries that you unlock as you explore and trigger purple lore points in the world or progress in the story.

I’ve always been a fan of a codex as a means of expanding lore, but Masquerada: Songs and Shadows tends to lean on it as a bit of a storytelling crutch. The dialogue and in-game events are interesting and engaging, but they lack a certain narrative punch if you haven’t been following along with the lore entries.

A little too much of the worldbuilding was left to written text in the game’s menus. It’s fortunate, then, that the writing is positively exquisite in these entries, but for those who don’t do a lot of reading, they’re going to miss out on much of the world’s political and fantasy elements that make it so interesting.

This narrative decision is no doubt a result of the game’s linearity. Masquerada: Songs and Shadows don't let you stray from the beaten path. NPCs will talk to you as you progress, but there are no side areas or tertiary characters to engage with. The game moves you along through the main path, with little to no choice in the matter.

It’s a double-edged sword because the narrative and worldbuilding are excellent, but the linearity forces much of it into codex entries to keep the main story moving along. If you don’t mind the heavy reading, it truly is a really well-realized world, but if you stick what’s happening in front of you, you may miss much of what makes this story and world so amazing.

It would have been a delight to see the story spread its wings and offer more player interaction or choice, but I cannot deny that what was happening on kept me glued to the screen. Combined with the codex entries, I was absolutely immersed in the game’s world.

Masquerada: Songs and Shadows uses an isometric camera and a tactical combat system that allows you to pause the game and issue commands if you so desire. Otherwise, holding R2 will allow you to attack, while the face buttons offer your spell attacks fueled by the Mascherine on your face.

You can switch between your party members and take direct control, and you should, because the A.I. can be a little frustrating when you’re not controlling them. Enemies will telegraph their attacks by showing circles of red beneath them, and oftentimes your allies will fail to dodge these attacks. When you’re up close and dealing damage, you’ll need to press your spell buttons twice to use them. In some cases, you’ll need to aim them first as well. Trying to do all of this in real-time can be cumbersome, which is why the tactical pause is helpful. You’ll be able to do some epic damage as well if you combine different attacks within the same element.

Skill trees offer depth in how you grow and expand your skills, and the choice of four different elements gives you a lot of play styles to work with. For those who just want the story, there’s also a difficulty setting that tones down the combat difficulty so you can breeze through those encounters.

Outside of combat, you’ll move from marker-to-marker and enjoy the narrative moments, but you don’t have much control outside of that. Player choice is not part of the gameplay, and beyond colored areas where you can watch additional conversations or unlock lore, the only real action to be found is in the combat.

While I think the combat itself works well, it could have used more depth or flourish. Some of the spells and abilities looked cool, but on the whole, the combat felt a little stiff. I did appreciate the ability to tailor ally behavior, but they still put themselves in danger more often than not.

Again, I think that the simple combat and linear gameplay helps keep everything moving at a nice pace, but it borders on suffocating as you explore the world and wish that you could go out and explore further. Alas, the game keeps you on a tight leash and never asks you to contribute to the story, simply to experience it.

It’s a perfect example of how a game can be too controlling. Had Masquerada: Songs and Shadows opened up its scope a little and given the player a deeper combat system and room to breathe, it could have rivaled some of the greatest RPGs out there. As it stands, the gameplay is perfectly playable and the combat is fun, but it could have been so much more. Masquerada: Songs and Shadows has a striking hand-drawn presentation that lends a great deal of color and detail to both the characters and their environments. Major cutscenes are partially animated, but highlight the strongest characteristics of the art.

The isometric perspective also offers an excellent view of the world. While some environments tend to be a little barren, the graphics overall look very enticing. The gameplay is also smooth, with pitch-perfect voice acting from all members of the cast.

This is all complimented by a soundtrack that effortlessly blends elements of Renaissance era sounds with classical fantasy themes. Plucking strings are joined with lofty woodwind solos and wonderful ballads that feel like they leapt right out of a high-fantasy RPG.

It’s a soundtrack that does what you need it to when you need it. When the time is right, percussion swells in the background as the tempo crescendos and the intensity rises. Overall, and excellent soundtrack by Josh Whelchel to compliment the wonderful presentation.

Coming to the end of my review, I look back on Masquerada: Songs and Shadows as a game that was made by a very talented team of people. It has all the trimmings of a truly masterful RPG. It’s held back by the over-reliance on codex entries and stifling amounts of linearity, but that didn’t stop me from falling headfirst into this unique and exciting world.

A copy of Masquerada: Songs and Shadows was provided to PS4 Experts for review purposes