Most people play games to escape from the real world. I am one of those people, but I also don’t mind a game that forces me to face very real problems. To some people, a game like Little Red Lie seems like a bad idea. It’s a game that tells one of the most intense and emotional stories I’ve experienced in gaming. It’s not going to make you feel happy or excited. It’s going to chew you up and spit you out.

Themes like crushing debt, depression, gambling, addiction, drug abuse, and plenty of others take center stage throughout this storyline. It’s not a game for the faint of heart. Having finished this intense journey, it’s time to find out if this game tells a powerful story, or if these promises are all just little red lies themselves.

When you first look at Little Red Lie, you’ll probably wonder how a game that uses simple sprites and environments can crush your soul into dust. As many other indie games have proven, great writing can breathe life into any presentation. While Little Red Lie may look simple on the surface, the first moments of the game will quickly show you what it has to offer.

Before you begin the story, you’ll be asked a series of questions. These are personal questions about debt, and they culminate in one incredibly powerful question. Suffice to say, it asks you what you’re more afraid of: poverty or death. It may seem like a simple question, but for many of us, myself included, the answer isn’t so black and white.

It sets the tone for a game that isn’t going to pull any punches. The storyline bounces between two distinct characters. The first is Sarah Stone. She’s a woman who is probably the same age as everyone reading this. She’s part of our generation that struggles with crushing debt and a failing economy.

Out of a job and forced to move back in with her elderly parents, Sarah’s life isn’t going well for her. As the story progresses, things don’t get much better. Since story is so important here, I won’t go into details for fear of spoilers. I’ll just talk about how it made me feel.

Sarah’s story was the one that resonated with me the most. As someone who fights and claws for every penny I earn, I immediately identified with Sarah’s situation. She tries to stay positive, but the world is beating her down at every turn.

Her parents don’t know about the debt that is weighing her down, they’re too busy taking care of her sister who lives in the basement and lives off donations from online patrons that watch her live streams.

Her parents are drained financially, and their health is getting worse. Meanwhile, Sarah’s just trying to do anything she can to keep things afloat. This heart-wrenching and powerful look at our generation is juxtaposed with the second character: Arthur Fox.

Arthur’s character is your classic rich sociopath. His opening chapter involves a seminar where he tells people the importance of money and how it equivalates to happiness. It is here that you really see the story’s main mechanic come into form.

During the course of the game, you’ll be forced to choose between lies, represented by red text in character dialogue. The truth will be known to you, but the face you show the world will be a vastly different one.

Both Arthur and Sarah tell plenty of lies, but their motivations are completely different. Where Sarah is trying to spare people the pain of the truth, Arthur is simply telling lies to further his own agenda.

Switching between these two characters offers a stunning contrast between the two lifestyles of our modern world. Sarah struggles to survive, while Arthur parties with hired escorts and bounces between drinking and drugs.

While Sarah is an incredibly sympathetic character, there were times when I felt bad for Arthur as well. The grass truly isn’t greener on the other side. When all is said and done, Little Red Lie isn’t the kind of game with a happy ending.

In fact, the game has very few, if any, happy moments to offer. It’s a slow and painful descent into a story that, while not an exact copy of my life, has enough similarities to leave me emotionally devastated by its end.

That’s not to say that Little Red Lie is wholly depressing. There was a silver lining to all of this for me. Despite the events happening on screen, for the first time in my life, I felt like I was witnessing a story that understood me.

I’ve always felt guilty for letting money control so much of my life. Little Red Lie taught me that, while money is a huge part of life, it cannot control your life. If you let money drive everything, you stop living.

Everyone will have a different takeaway from this story, but that’s what makes this such a powerful story. I highly recommend this game based on the story alone, but you have to go in knowing that it’s going to be rough.

The writing is superb, but I have no doubt that some of Arthur’s dialogue will offend plenty of people. I also know that Sarah’s story will hit close to home for many people. Be prepared for these kinds of emotional punches, and you’ll be in for one of the best storylines I’ve ever experienced. 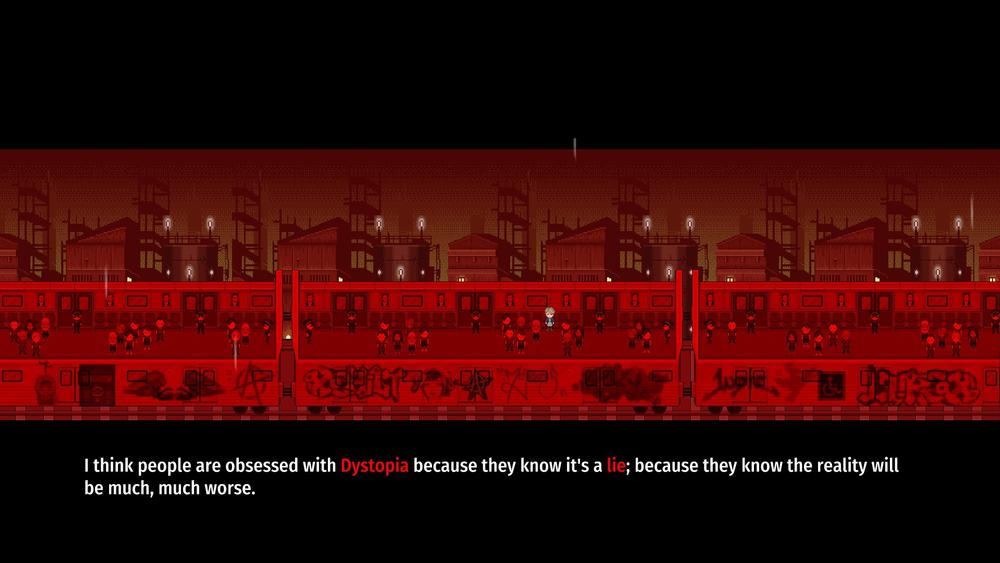 Little Red Lie is a visual novel at heart, so there’s not a ton of gameplay to talk about. You will have the option to choose dialogue choices and explore environments, but the rest of the experience is largely passive.

When you’re choosing how to respond, you’ll see the truth, but what your character says will be a lie, represented by red text. Your only choice in the game is to lie, which represents the motivations we have to cover up our problems and keep them to ourselves.

Sarah and Arthur both lie for different reasons, but all they can do is lie when you’re given a choice. The ability to explore environments allows you to interact with various objects and learn more about the characters, but they will still lie even when they’re telling you about their lives.

While the ending can change, your choices don’t carry a lot of weight. It would have been interesting to have more control over the story, but the dialogue choices all result in the same general lies.

For some, that kind of rigid storytelling may put them off, but I didn’t mind. I don’t think Little Red Lie could or should have played out any other way.

Now, there is one issue I had that I feel needs to be mentioned. At one point about about two hours into the game, I encountered a glitch that took my character away. Every time I loaded the game, Sarah was gone. I could move around and hear her footsteps, but I couldn’t leave the room I was in.

I tried reinstalling the game, but nothing worked. I was stuck in that room with an invisible character. As a result of this glitch I had to start again from the beginning. My second playthrough didn’t have any issues, so I’m confident the issue was a one-off.

Other than that, I didn’t encounter any issues or glitches while playing the game. I haven’t seen any reports of similar problems, so I wouldn’t say it’s a common issue, but since it did happen I’m obligated to mention it here in the review.

The general presentation of Little Red Lie uses basic environments and character sprites, but the game does occasionally throw in some excellent still art for significant story moments.

All of it works very well. I would have loved to see more of the still art images since they were so well done, but there are still enough to give you a detailed image of the main characters. The somber and melancholy soundtrack is excellent, especially paired with the rhythmic clicking the text as it slides across the screen.

Little Red Lie is an incredible game. As someone who struggles with many of the things it talks about, I felt completely immersed in its world. It left me emotionally devastated, but I would still play it again in a heartbeat.

The unfortunate glitch that required me to restart the game has to be considered in the final score, but if you enjoy narrative games and stories that take a hard look at modern society, I challenge you to find a game, book, or movie that tells such a story better than Little Red Lie.