Throughout my long years of gaming, I’ve always been someone who understands the need for training, but would otherwise just get into the action. Games with shooting ranges are fun, but usually I’m only there for a few minutes, and I move on. Well, Lethal VR takes the same approach as arcade classics like Police Trainer and places the whole game in a shooting gallery.

You are a recruit for the F.B.I. Play through a variety of shooting challenges in VR as you chase the next high score. With lots of weapon variety and some unique level design, is Lethal VR a killer app for PlayStation VR, or does this one miss the mark? Time to find out!

Good? Bad? I’m The Guy With the Gun

Lethal VR gets you quickly into the action. With a variety of challenges across several difficulty levels, you’ll take down everything from bulls-eyes, to vases, to 2D cutouts of generic bad guys you would expect to see in a real shooting gallery.

The levels also have funny nods to classic action films. For example, one knife throwing challenge is called “This is a knife!” and has you sporting a “Dundee knife.” Another one was a clear reference to Dirty Harry as you took out enemies that popped up in the windows of houses with a six-shooter.

A final example would be a level based on classic John Woo films where you wield two pistols and destroy thousands of dollars in precious vases. While there’s no overarching plot, as an arcade title, Lethal VR brings a lot of cool challenges for players, while also paying homage to numerous classic action films.

It sounds fun, but how does it play?

The developers at Three Fields Entertainment are known for their work on titles like Dangerous Golf, Burnout, and BLACK. Their aptitude for shooting controls, design, and destruction are all on display here. Using the PlayStation Move, tracking with the guns is smooth and accurate shooting is more than possible with practice.

If I had a cursor to see where the game thought I was looking, that would have helped immensely. Otherwise, I could only generally judge where the knife was going to go. This is all fine until you reach missions where you must hit a bad guy while they’re holding a hostage. 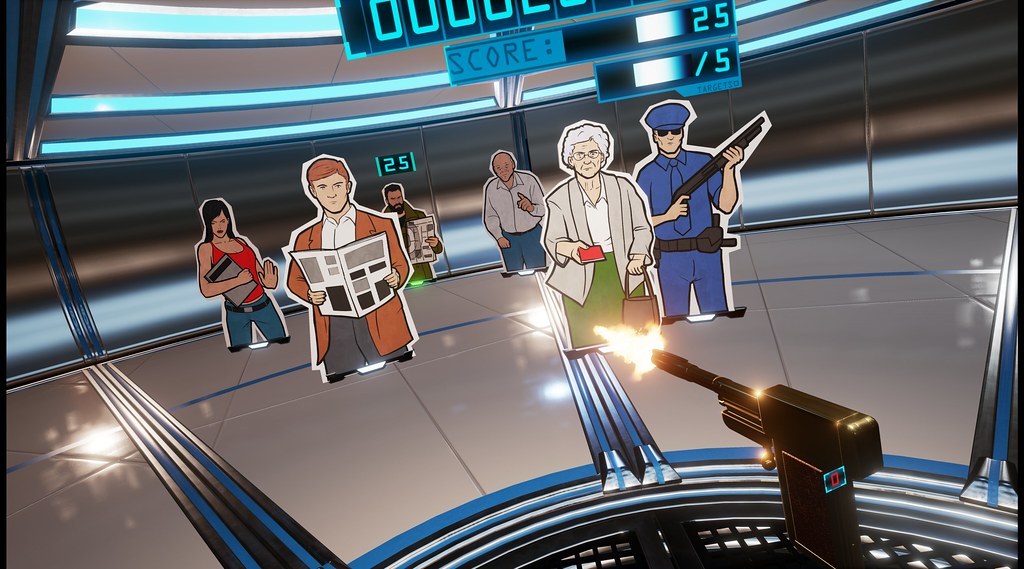 Even a slight miscalculation, and the knife hits the hostage. Game over, try again. Without knowing precisely where my knife is going, levels like this were extremely frustrating. I understand the idea behind the knife throwing, and I think it’s a cool idea to break up the shooting, but it pales in comparison to the shooting levels.

Thankfully, knife levels aren’t extremely plentiful, but you can expect to have your progress halted by the occasional level that requires precision throwing. While it won’t take you incredibly long to see all the levels the game has to offer, you will find that the scoring and ranking mechanic entices you to shoot for that high score.

With the ability to enter your initials like classic arcade titles, it’s fun to compete with your friends or significant others to get the best score. While I consider myself a fairly competitive person, my other half, Christina, is a ravenous competitor. We had a lot of fun challenging each other’s scores, but she still won in the end.

When it comes to shooting galleries, Lethal VR beats anything we can do in the real world. The simple room you’re in for the duration of the game will open up for some levels, leaving you suspended over a metal abyss, while other levels will bring in simple structures for enemies to pop out of.

The shifting nature of the environment makes it feel like you’re in a real training simulation, and while there’s not a ton going on in terms of graphics, everything looks sharp and crisp on PS4 Pro. The weapons especially have a lot of detail to them.

For it’s low price of entry, Lethal VR is a great arcade game for both hardcore competitors and casual fans of shooting galleries. It doesn’t reinvent the wheel, and the knife tracking can be problematic, but there’s no denying the satisfaction you feel when you wipe out an entire level of targets using dual SMGs.

Feelin’ lucky, punk? You will when you play Lethal VR.