There has been a new wave of titles in recent years that focus on concentrated experiences. They usually only last an hour or two at the most and tell a short story within that time. Depending on design choices, they offer some interactivity or barely any at all. Some will call them walking simulators, but I’ve always detested the term. There’s so much more to these types of games than simply “walking.”

Enter Leaving Lyndow, a game that falls into this sub-genre of exploratory narrative experiences. In this game, you play as Clara, who is leaving her village for the first time in her life to embark on a journey she may not return from. It’s a compelling premise, but does the game capitalize on this idea, or is this departure more welcome than it should be? Let’s find out!

A Precursor to a Larger Project: The Premise and Purpose of Leaving Lyndow

When I finished playing Leaving Lyndow, I took to the internet to try and read more about it. The game was created as an introduction to a much larger universe called Eastshade. Now, Eastshade is a full-length game that is currently in development. Leaving Lyndow was made as an experience set within this new world.

The balance here needed to be careful. The game needed to introduce players to the world, while also feeling like a standalone story. While the game doesn’t quite strike this balance perfectly, it’s still an incredibly compelling way of pitching a new universe to players.

I would urge anyone interested in Leaving Lyndow to read the postmortem on the developer’s blog, as it sheds some light on the trials and tribulations of creating a project like this.

The concept was to create a short experience that would supplement funding on the main game. This was chosen over traditional crowd funding like Kickstarter. Instead of paying money for a pitch and a video, you’re paying for an experience that not only funds the main game but gives you a taste of what’s in store from a narrative standpoint.

As a concept, I absolutely love this. I think we should all be more inclined to pay a developer for an experience like this, instead of blindly throwing money at a Kickstarter. With so many projects going under after funding doesn’t reach the target, a concept like Leaving Lyndow ensures that you’re getting something immediately for your contribution.

That’s not to say that I don’t support Kickstarters. Far from it, but I think this approach was a really unique and smart way to introduce players to a new universe. With that said, let’s explore Leaving Lyndow as a standalone experience.

You play as Clara, a young girl who has been accepted to go on an exciting journey. The nature of this journey is revealed through dialogue and documents you find as you explore the village of Lyndow and the surrounding area.

One thing is certain: she may not come back from this journey. If she does, it will be years in the future. She needs to prepare and say her goodbyes. If we stop there for a moment, that’s an excellent setup. I went into Leaving Lyndow expecting a tearful parting between Clara and her friends/family.

Your total time with Leaving Lyndow will be about an hour or so. During this time, you’ll speak with Clara’s immediate family and some friends of hers. You’ll also learn more about the journey itself and details about the world of Eastshade.

I was immediately intrigued and interested in this unique universe, but there was also a disconnect I couldn’t ignore. While the sense of parting and saying goodbye was there, Leaving Lyndow didn’t do enough to really elicit an emotional response from me.

The characters all had their own opinions about her journey, but none of them really did much beyond voicing their opinion. There was definitely a sense of nostalgia as you visit some of the places from Clara’s childhood, but at no point did it feel like Clara herself had much conflict about leaving.

The opportunity before her is a great one, but I would have imagined some kind of internal conflict. She is, after all, leaving everything behind. Beyond some light disapproval, there’s not really anyone in the game who seems to mind that she’s leaving and may not come back.

Instead, it felt like Clara was going through the motions, reliving a few old memories, and then leaving behind everything she ever knew. From a narrative standpoint, I think Leaving Lyndow absolutely succeeds in acting as a compelling pitch for the universe of Eastshade. As a standalone experience, however, Clara’s story feels like it could have done so much more with its premise.

Saying goodbye, moving on to a new chapter, and abandoning everything you’ve ever known is something many people face in their lives. I myself am going through a similar transition as I leave behind my hometown for a new life somewhere else.

I’m terrified, and both my family and my girlfriend’s family are conflicted about our decision. Some of them support us in our search for greener pastures, but others are asking how it affects them. Life is messy like that, and I feel like Leaving Lyndow could have tapped into things like these to really portray the tumultuous nature of change, and the mixed emotions associated with it.

It succeeded in making me excited about the universe of Eastshade, that much is true. Unfortunately, while I enjoyed Clara’s story, I feel like it could have been so much more. 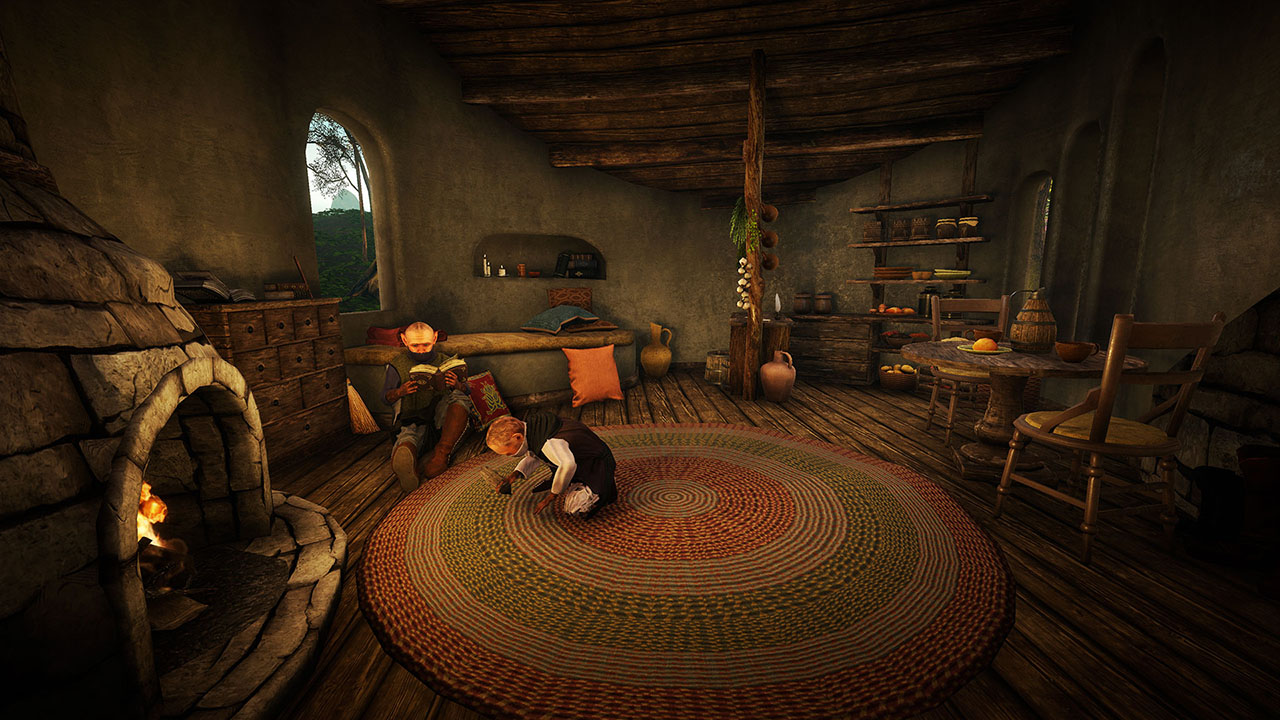 Leaving Lyndow relies primarily on exploration, but it also manages to add in a few interactive moments throughout the playtime that keep you from feeling too detached from its world. You’ll explore Clara’s house and prepare for her journey first. From there, you’re free to check out several other areas of Lyndow at your leisure.

During your exploration, you’ll be able to interact with documents, letters, and other items that flesh out the world and the nature of Clara’s journey. You’ll also have the opportunity to converse with characters and hear their thoughts on Clara’s departure.

In several cases, you’ll also have the opportunity to participate in a puzzle or mini-game. These small breaks from the exploration make the experience feel well-rounded and engaging. One particular puzzle required me to call for help from my girlfriend/player 2, but she came through as always.

It’s a simple, but interesting experience. The occasional activity or mini game also keeps the exploration from becoming too tedious. While some people will complain about the walking speed or lack of a sprint button, I would argue that Leaving Lyndow’s environments are small enough that this doesn’t become an issue in the slightest.

From a gameplay perspective, it does a fine job of bringing additional interactivity to the genre, while also nailing the expected narrative devices like dialogue and documents/interactive objects.

A Beautiful World Worth Exploring

Leaving Lyndow is a beautiful game, there’s no arguing that. During your journey, you’ll encounter colorful farmlands, seaside harbors, and lush forests that offer alien horizons worthy of any AAA title.

I especially enjoyed the incredible view on offer in the forest area. If you approach the edge of a steep drop, you’ll be treated to a vista of towering mountains, vivid indigo waters, and multiple planets hovering in the sky. It looked like the cover of a science fiction epic, captured in a single screenshot.

Leaving Lyndow does an amazing job with texture, lighting, and color. It’s a stunning world that begs to be explored. Not everything is perfect, however. The characters themselves leave a bit to be desired. If you read the postmortem above, you’ll learn more about the reasoning behind the character design, but unfortunately, it takes more than it adds.

While there’s a reason for it, every character you interact with has their mouth covered with a cloth. This removes the need for lip sync, but it also leaves all the emotion for the top half of the face. Characters stare blankly at you as you converse with them, lending no emotion to the scene or dialogue.

In a world that lush and beautiful, the characters stand out as something that could have been vastly improved with a reworked design. It’s unfortunate, but not a deal breaker. I would still recommend Leaving Lyndow based on the sights and sounds.

Speaking of sounds, the soundtrack here is very good. The music here is composed by Phoenix Glendinning, and it is responsible for the majority of the emotion in Leaving Lyndow. The subtle, yet powerful piano melodies lend a somber atmosphere to your exploration. It’s in these moments that you feel that conflict and that nostalgia I mentioned earlier.

Elegant elements of harp and strings also add to the wonderful atmosphere the soundtrack provides. Eastshade is truly a beautiful world, and this music is an excellent pairing for the stunning visuals. Top it off with some excellent woodwinds, and you have a soundtrack that matches the incredible visuals.

So, when you boil it all down, Leaving Lyndow nails two of the three things I expect from a narrative experience like this. It has wonderful visuals in a compelling world, it has a serene and elegant soundtrack, but it falters in the story department. Clara’s story is one that is universal to all of us at some point in our lives, but here it just feels like a mean to an end.

Leaving Lyndow succeeds in selling the Eastshade universe, but it ultimately comes up short as a standalone experience. Even so, I recommend you give it a try. If anything, you’re funding the creation of a much larger creation that I think all of us would like to experience.