When you hear the term roguelike, you probably imagine a host of games with punishing difficulties and wide ranges of style and gameplay. Above all else, you imagine a game where one death resets just about everything. Leap of Fate is indeed a roguelike and checks all of those boxes. It’s also a really unique take on the genre.

In a world where magic is real and technology has reached dangerous frontiers, you will play as one of four people facing their pasts and glimpse their futures in the Crucible of Fates. Does this stylish roguelike manage to carve out its own slice of video game greatness, or does this leap end badly? Time to find out!

One Past, Many Possible Futures

Leap of Fate gives you the opportunity to play as one of four different characters, but when you first start playing, you’ll only have access to Aeon. When you first start the game, you’ll be treated to Aeon’s opening where he describes his tumultuous childhood and his ultimate initiation into a magical order.

This order is focused on breaking down their acolytes until their minds can be replaced with magic. It’s a toxic bunch that reeks of a cult, and Aeon soon figures this out. When he sees an opportunity, he bolts and runs for what’s left of his life. As he runs, he finds himself thrown into the Crucible of Fates.

This place forces you to fight against your own demons and face your fears head on. In return, it will show you your possible fate, one of many. Aeon’s story is just one of many. He’s joined by three others. Big Mo, a cyborg that is searching for answers to the questions about his past and his true nature.

Mukai, a young woman who has been struggling all her life with entities that possess her body and speak endlessly in her mind. Finally, we have Rasimov, a rogue occultist seeking to finally cheat death once and for all.

Each of these characters is given their own intro cutscene, and several different fates you can unlock by completing specific challenges in the crucible. While the endings aren’t quite as long and detailed as the intros, the framing for each character is excellent and they all have their own unique feel from a narrative perspective, while all managing to fit into this intriguing universe.

Speaking of the universe, Leap of Fate’s only problem with the story is the fact that they gave me a taste and I’m hungry for more. The strange alternate version of our world, filled with magic, cybernetics, spirits, and much more, begs for more attention. Each of the characters feels like an all too brief slice of something much bigger and grander. Even the Crucible of Fates itself has an undeniably alluring aesthetic and its caretaker is one of the most interesting characters I’ve seen since the G-Man from Half Life. All of it is cool, confident, and most of all, interesting.

I want to know more. I would gladly pay for more characters as DLC if it meant a deeper look into the world. I’ve played my fair share of roguelikes and I usually go in expecting light to a non-existent story. Leap of Fate bucks that trend with confidence and swagger. It’s a world that can only be described as badass, mysterious, and oozing with potential.

Let’s see if the gameplay can match up with the quality presented in the story and world.

Just One More Run, and Then Another After That 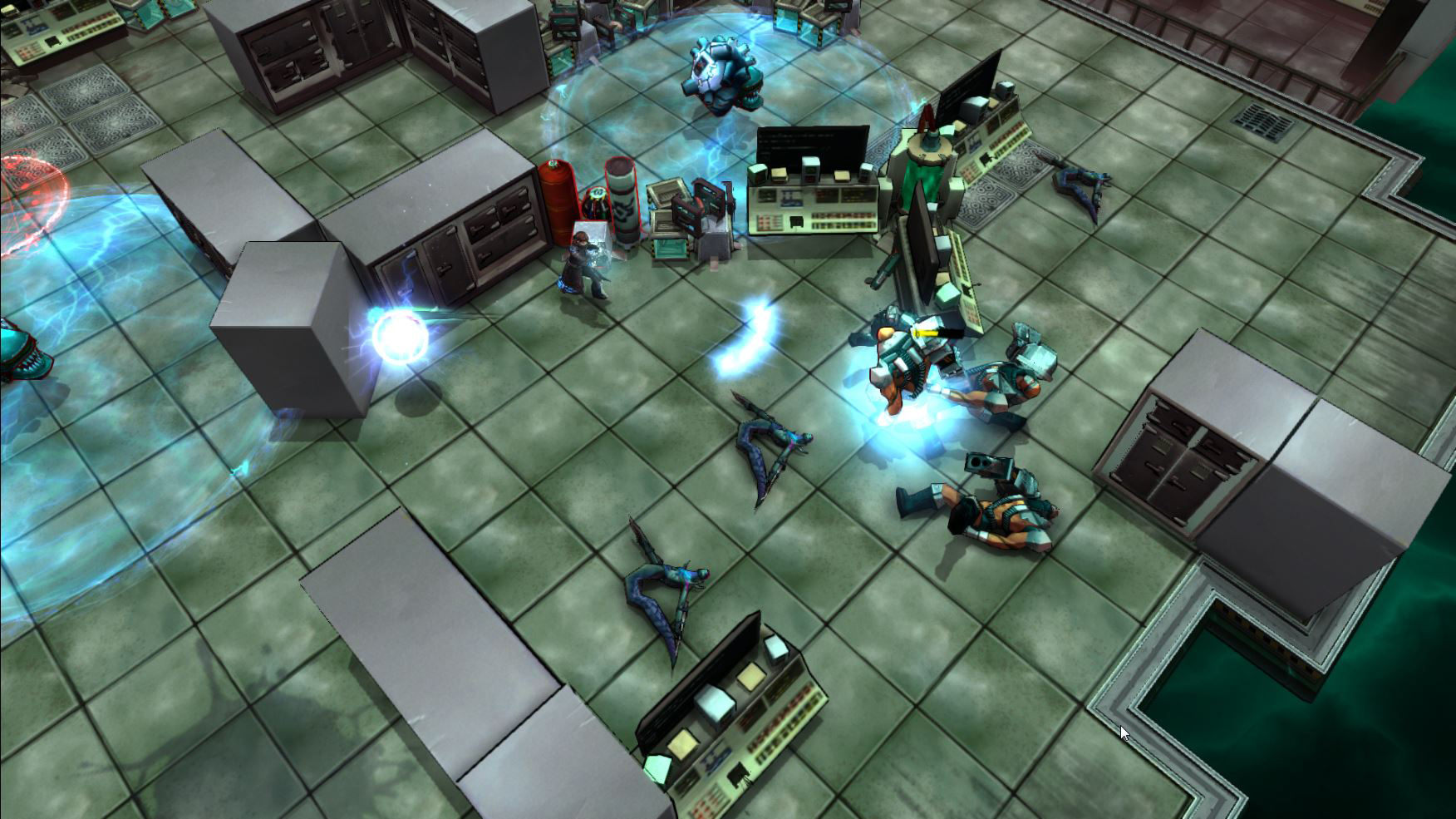 In true roguelike fashion, Leap of Fate gives you procedurally generated levels, skills, and even enemies. Once you go down, it’s back to the main menu (unless you have enough to pay for a second life, but two is the max). Many gamers stray away from roguelikes because of this punishing difficulty, but Leap of Fate offers a lot of reasons to come back.

The Crucible of Fates is six levels in total, each of which is represented by pyramids of randomly shuffled cards. You start at the top of the pyramid and flip them over as you move down. Cards come in the form of combat, gifts, shops, upgrades, and bosses.

Each card allows you to quite literally leap into it and find yourself in an isometric view of the world. Take combat cards, for example. The number of skulls denotes how many waves of enemies you’ll face. A treasure chest of varying sizes shows how big your reward will be as well.

Gift cards throw you into a small stage where you can redeem random things like additional mana, currency, keys, health, or energy shards. In some cases, you will come across cards with locks. There are standard keys you find to unlock these, but there is also a clockwork key to be found in each level.

The clockwork key allows you to choose between several bonuses for that stage, which can give you a welcome boost. The shop cards are pretty self-explanatory, and the upgrade cards give you the opportunity to spend mana to upgrade skills within one of three trees that are randomly shuffled each game.

These trees range from active, to passive, to movement abilities. The fact that they’re shuffled means that you’ll often find new and exciting abilities to choose from. For example, one game I was able to get a skill that froze all the enemies around me for a few seconds every time I got hit. The next game, I got a skill that randomly struck enemies with lighting around me for massive damage.

Beyond your skills, you’ll also have a secondary power that you can swap out as you find new ones or upgraded versions. For Aeon, this was a powerful magic bolt, but Big Mo’s default ability is an energy grenade with a satisfying explosion that works awesome on groups of enemies.

Each character has a primary ability called Shadow Walk. This is a dash that allows you to pass through enemies and essentially warps you to a nearby spot on the map. While each character has this ability, they each have a secondary effect that is unique to them.

Aeon damages enemies he passes through, while Big Mo leaves behind a hologram of himself that distracts enemies. He remains cloaked while the decoy is active, allowing him to move in and take out the unsuspecting enemies.

Another example is Mukai, who shoots out a homing bolt of spiritual energy as she passes into Shadow Walk. Unique to each character is also their primary form of attack. Aeon has rapid firing bolts of magical energy, while Big Mo has an arm cannon that can be overcharged for sweeping damage, but it can also overheat.

Mukai fights in close combat with wide swings and powerful melee attacks. It’s easy to see from these examples how different each character can be, especially when you start working on skills, abilities, and finally, challenges.

The only permanent upgrades in Leap of Fate come from the challenges that you can complete during each run. The Crucible gives you challenges like “complete 9 combat encounters in level 2” or “kill 80 enemies with Shadow Walk.” These challenges are presented before you dive into each pyramid of cards, and completing them slowly unlocks permanent upgrades to your health, damage, and adds some additional skills that make you even stronger.

So, now that you know how Leap of Fate works, how does it play? I’m pleased to report that the game runs incredibly smooth as a consistent frame rate and utilizing twin-stick controls for seamless movement and aiming. It feels tight and responsive, and when your abilities start stacking up, it’s a symphony of carnage and constant action.

Leaping in and out of cards is done without any loading screens, and looks awesome to boot. Planning your build as you progress and cheating death at every turn is an adrenaline rush as you approach the boss of the level.

Boss fights are randomized as well, putting you up against a variety of giant enemies that are usually surrounded by tons of smaller ones. While most enemies can be dealt with by shooting them until they stop moving, others require you to get around armor or shields to deal damage.

Bosses, while interesting, are usually just bullet sponges that will eventually go down with enough hits. More involved boss fights with additional strategy and perhaps multiple tiers would have been interesting, but they put up a challenge worthy of their stature.

The environments do shift as you progress through the levels, and they also offer some environmental hazards you can use to take out extra enemies. Explosive barrels. Arcane shrines and abandoned cars can be attacked and exploded near enemies for bonus damage.

To summarize everything, because there’s a lot, Leap of Fate offers one of the most satisfying roguelike experiences I’ve had the pleasure of playing. The punishing difficulty is mediated by the opportunity to come back once from death, and the chance to find health drops when you need them most. Frustration is tempered by the permanent skills you get from challenges, and repetition is staved off by the inclusion of four wholly unique characters and ever-shifting skill trees.

It really does feel like they thought of everything to keep the game from feeling imbalanced, repetitive, or boring. It all fits together like expertly crafted puzzle pieces. It’s one of the few roguelikes where I kept telling myself “just one more run.” 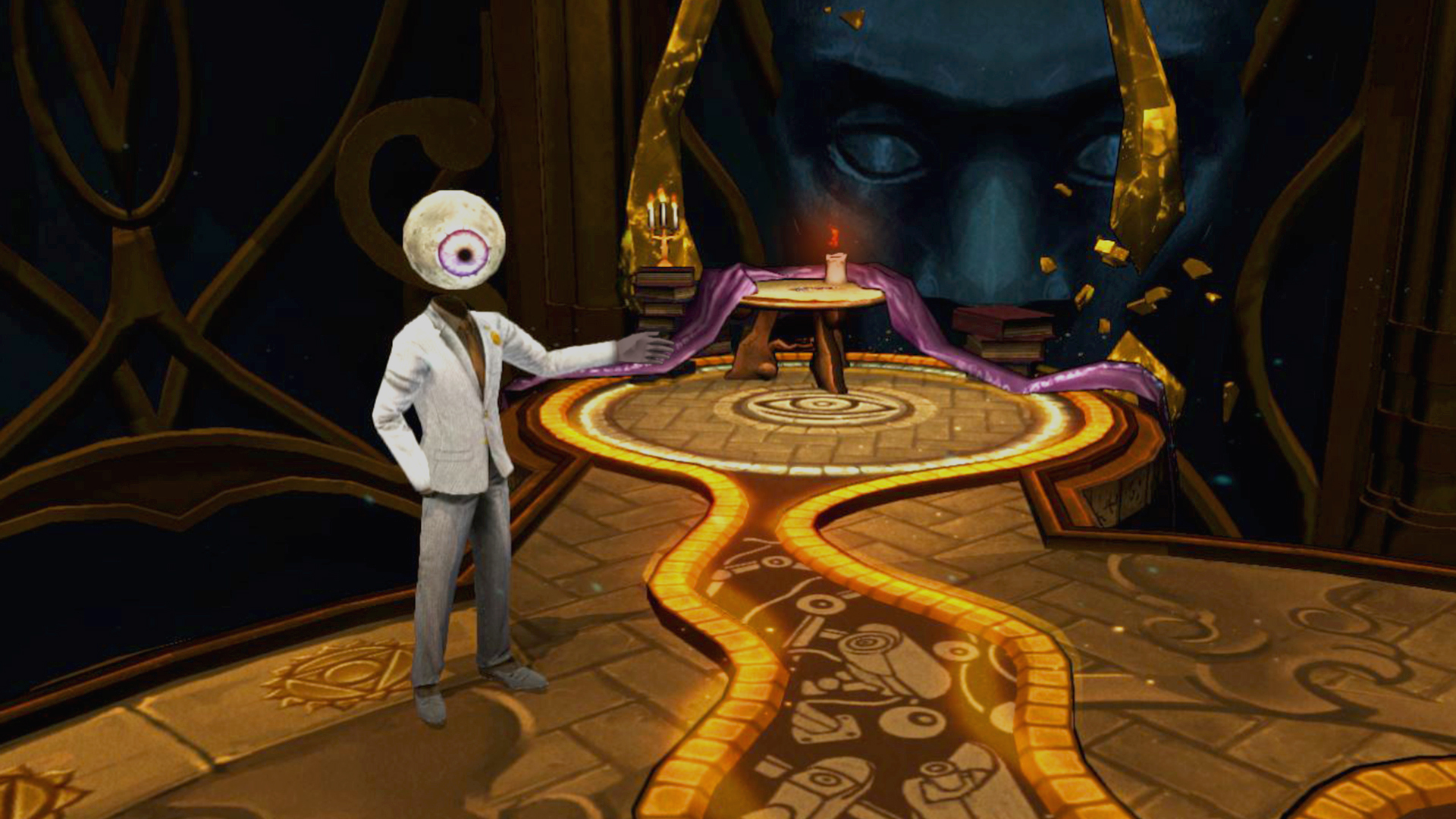 If there’s one word I would use to describe Leap of Fate’s presentation, it would be “confident.” It’s one of those games that know it’s awesome and it’s not afraid to flaunt it. Everything, from the gritty illustrated cutscenes to the way the character leaps out of cards and slams down when they enter them is just oozing with style.

Animations are smooth and deliberate, the music is always keeping the atmosphere intact, and the appearance of the Crucible’s caretaker always makes me grin from ear-to-ear. His musing between levels is cryptic while also being relevant to the character you’re playing as. When you go down, he smugly saunters up to the menu and presents a one-time-only chance to come back if you have the scratch to pay him.

The structure of cards to leap in and out of levels feels great and keeps everything organized, while also showing you exactly where you stand. The voice acting, while not outstanding, is all well done, especially when the caretaker of the Crucible is speaking to you.

There’s not much else to say, other than the fact that Leap of Fate is a breath of fresh air. Roguelikes sometimes tend to run together and borrow mechanics from one another, but Leap of Fate confidently enters the fold with its own unique world, story, and excellent mechanics.

If you’re checking this game out in the PlayStation Store and you’re curious, do yourself a favor and take the leap. You’ll be glad you did.