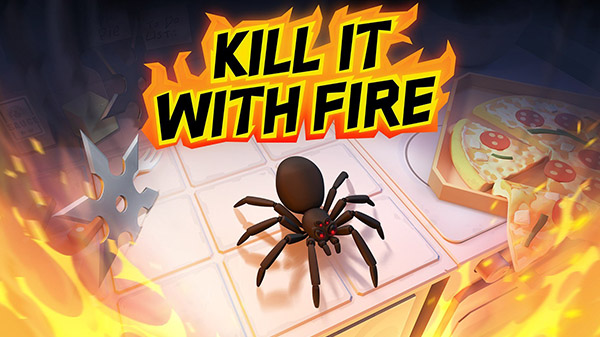 I am among the many, many people who aren’t big fans of spiders. I understand the role they play in keeping other pests in control, but at the end of the day, the creatures I allow in my house max out at four legs. When I saw that Kill It With Fire was coming to PS4, I saw an opportunity to do what I always wish I could do when I spot a spider in my house: burn it to the ground.

This over-the-top first-person title for PS4 allows you to wreak havoc in a variety of environments, using all manner of tools and weapons, to eradicate spiders and complete optional objectives in equal measure. The best part? There’s no punishment for collateral damage! Is this the cathartic experience we all hope it would be, or should you spend your time hunting something else besides spiders? Let’s find out!

A Chaotic and Surprisingly Compelling Shooter

The best kinds of games are the ones that make you do a double-take. Being a gamer my entire life, I’ll stop to look at a spider-killing simulator long before I pay much mind to something like a multiplayer shooter, but that’s just my style. Kill It With Fire stays true to its name, throwing you into your first level with the only context you need: a clipboard with objectives and a tutorial on how to hunt and kill spiders.

While story is not the focus here, there are some fun world-building things to find and secrets to hunt down that add a little context to the otherwise standard environments. I particularly enjoyed the side objectives that forced you to think outside the box and do something besides hunting spiders to mix things up.

The core gameplay loop is simple, but I found myself playing for extended sessions because of how engrossing it was to cause as much collateral damage as possible in my hunts. You can pick up objects, throw them, smash them, and set just about anything on fire with your weapons. Given the level of interactivity, anything can be a weapon, even the clipboard you use to check your objectives.

Both the spiders and the weapons continuously get more ridiculous as time goes on as well. One moment you may be torching an entire kitchen with a can of spray and a lighter, and the next you could be firing into a group of spiders with a double-barreled shotgun.

Though the spiders can hurt or kill you, hunting them is still a harrowing experience. You have a hand-held radar you can pull out to locate them, but without some upgrades it doesn’t help a ton in the beginning. The eight-legged monsters are often hiding on random objects, beneath furniture, or in drawers or cabinets.

When you do find them, a screeching violin track kicks in as they scurry to nearby safety. Depending on the type of spider they will splatter with satisfying green goo, explode into smaller ones (NOPE!), or just explode in general. This is typically when instincts take over and you just start firing or smashing with the nearest frying pan you have in your inventory.

Progression in levels is tied to your number of spider kills, which allows you to unlock new weapons in locked containers, or open new rooms to explore. Optional objectives keep things interesting as well, asking you to smash dishes, hunt down specific items, or gather things together in a single place.

An Arachno-gauntlet in each level provides the highest level of challenge, tasking you with a timed objective that truly puts your skills to the test, at least, in comparison to everything else which is refreshingly low pressure and just plain fun.

Between the surprisingly scary act of hunting spiders, the collateral damage, the destructible environments, and the fun side objectives, Kill It With Fire rises above its simple premise to provide a fun and cathartic experience. My only complaint would be that it’s over fairly quickly as there aren’t a ton of levels, but the promise of secrets and unlocking upgrades does keep things interesting throughout. 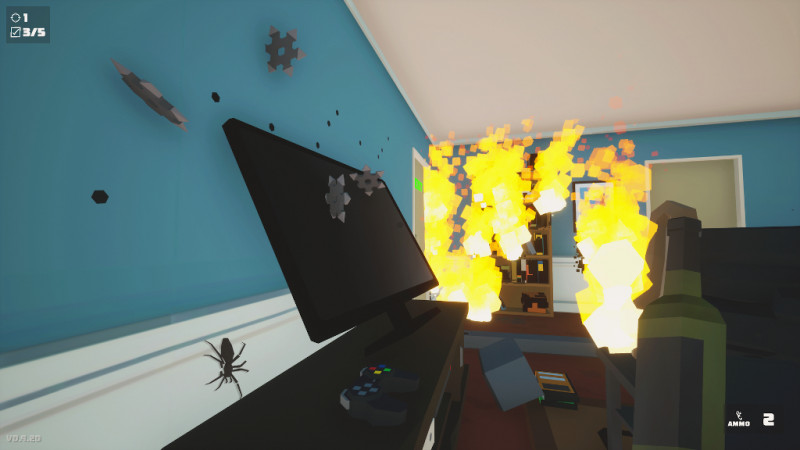 Kill It With Fire’s presentation is simple but effective. The realistic fire simulation and interactivity across environments gives everything a tactile feel that is very enjoyable in motion. One oddity that I came across was a stark difference in brightness between the 1080 / 60FPS and the 4K / 30 FPS modes on PS4 Pro. Playing in 4K looked nice and crisp, with appropriate brightness levels, but the other mode made everything significantly darker to the point where I just stuck with the 4K mode. I’ve never encountered that issue before, but it could be a TV setting and not the game. In either case, I felt it was worth mentioning.

There’s something nice about a game making a simple promise and executing on it with polish and dedication. Kill It With Fire isn’t going to set the world on fire, but it delivers on the promise of hunting spiders and lets you set plenty of environments on fire yourself in the process. At the end of the day, given the concept, you can’t ask for much more than that.

A copy of Kill It With Fire was provided to PS4 Experts for review purposes.