I grew up playing classic point-and-click adventure games, despite being terrible at the puzzles and brainteasers they were known for. I just loved the focus on story and narrative. More often than not, I resorted to a guide or walkthrough, but I justified it all for the sake of experiencing a new story.

The Inner World: The Last Wind Monk is a sequel to The Inner World released on PC, but it happily welcomes newcomers to the world of Asposia. It's a classic adventure game complete with quirky characters, fun puzzles, and even some surprisingly dark themes. Does this game tap into an adventurer's inner nostalgia, or does it fail to put some wind beneath your wings? Time to find out!

A Charming Tale With Some Dark Corners

The Inner World: The Last Wind Monk opens with an opening cutscene that catches players up on the events of the first game. It's detailed enough to provide a strong background without taking too long to get the point across.

The puppet show style of the opening also catches the eye immediately. Essentially, the kingdom of Asposia exists inside of a larger world, hence the name Inner World, and is kept alive by wind fountains that keep breathable air circulating throughout the kingdom.

The events of the first game involved a man named Conroy who secretly built mechanical basilisks that could turn people to stone with their gaze. He convinced the people of Asposia that they were a threat coming from the wind fountains when in reality he was the one who had built them.

Having defeated him by turning him to stone, Robert saved the day just before being turned to stone himself. The Inner World: The Last Wind Monk opens with Emil, our new villain. Emil has convinced the people that Conroy was a martyr for them.

Furthermore, he has also convinced the people of Asposia that the flute noses are behind Conroy's death. He wants to exterminate them by throwing them down the wind fountains.

Of course, without the flute noses, the wind fountains cannot be sustained. Therefore, destroying them would doom the entire kingdom of Asposia.

When I first saw the hand-drawn art style of The Inner World: The Last Wind Monk, I figured it would be a light-hearted adventure. I was both shocked and surprised when I finished watching the opening cutscene.

Emil and his group of Conroyalists are a very clear metaphor for modern and historical groups that persecute and seek out the genocide of a particular people.

The flute noses themselves are functionally the same as other Aspsosians but are easy to identify by the holes in their noses that resemble those of a flute.

To hide their identity, they wear striped socks over their noses. These themes of persecution and genocide are some of the story's strongest aspects.

It may sound odd to pair these themes with comedic dialogue and witty banter, but to the game's credit, it actually works really well. The game never forces its darker themes on you, but it does let them creep up from time-to-time between the more light-hearted moments.

This means that The Last Wind Monk doesn't try to be dark for the sake of being dark, but it does manage to tell a more mature story than one would expect from an adventure game like this one.

While telling this story, it still manages to keep have some great characters and some truly funny moments. It leans more heavily on the comedy than the darker side of the story, which is smart.

Even so, the theme of persecution gives Robert and the flute noses more depth than I expected. It also makes the villain, Emil, that much easier to hate.

When you've played a lot of adventure games, they start to run together, but The Last Wind Monk really stands out in my eyes for trying something different with its story. It's more than your typical hero's journey with jokes and puzzles.

It's all of these things, while also being a tale of rising up against impossible odds and fighting against oppressors for the betterment of an entire people. It manages to be profound without ever feeling forced, and it never sacrifices that witty humor or style in the pursuit of darker themes.

It's a unique and interesting story, set in a whacky and weird world. In other words, it's exactly what I wanted from a great adventure game. 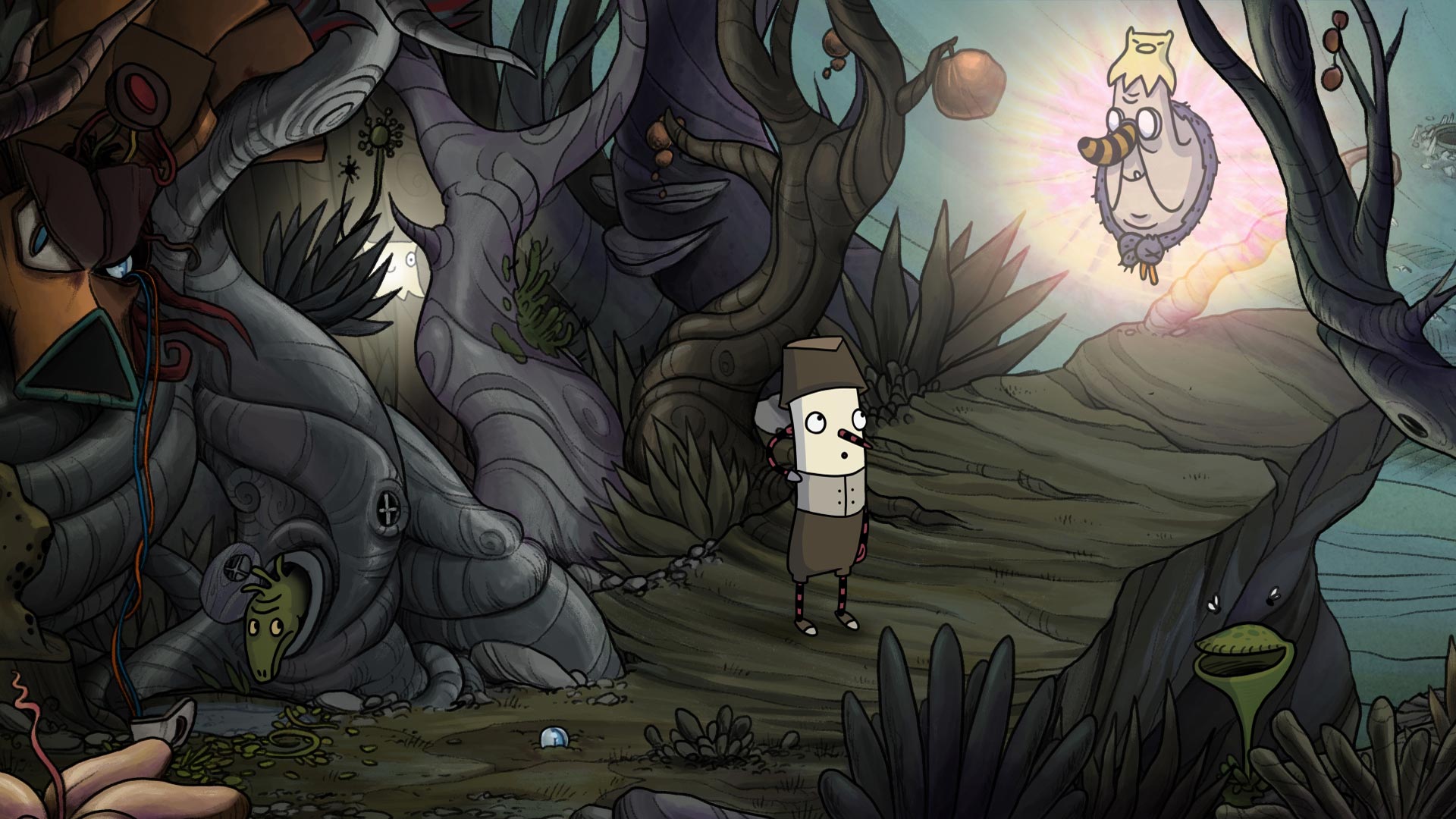 Adventure games like The Last Wind Monk are most often played on a mouse and keyboard. With more and more of them making the jump to the PS4, it's interesting to see how developers choose to adapt the controls to a DualShock 4.

The Inner World: The Last Wind Monk uses a hotspot system instead of a cursor to select and interact with its world. You can scroll through interactive points in your immediate area with the R1 and L1 buttons. When you select one, you can choose to observe, interact, or use an item.

Beyond Robert, you can also take control of his trusty pidgeon friend with the click of the left stick. The bird can reach different places and is used for certain puzzles.

This system of selecting and interacting with the environment works well, but it can be frustrating to cycle through several points constantly to reach the one you want.

An optional cursor would have been nice if only to make selection easier. Given a choice between the two, I would still keep the hotspot mechanic without a second thought as it does work very well on its own.

In true adventure game fashion, many of the puzzles involve collecting items and using them in various combinations. While some of the puzzles can feel a little obscure, they all tend to make some sort of logical sense by the time they're finished.

I would say that the puzzles here will be somewhat challenging to veterans, but not as hard as puzzles found in classics like Myst. It's a comfortable level of difficulty that can be undermined by the hint system in place.

Now, as someone who is pretty bad at puzzles, I loved the hint system. That being said, it is very generous with giving out the solutions. Without any restriction, you can scroll through hints for your current objective.

The first few give you small nudges, but the end of the thread will directly tell you how to solve the immediate problem. I think there should have been some sort of restriction here that forces you to try or at least wait before being given the solution.

Purists will have no trouble resisting the urge to look at the hints, but someone who just wants to see the story like me can easily get the answers and move on. I'm conflicted on this mechanic, because I liked the ability, as a reviewer, to quickly get through the game's puzzles and see all that it has to offer.

On the other hand, I can how some people would feel guilty for look at the solution. The game even gives you a trophy for using the hint system too much. It's called "Casual Gamer." That one hurt a little.

Regardless of how you feel about the hint system, it's entirely optional and never forced on you. It's an interesting mechanic to have in a game where the puzzles are the primary challenge, but it also ensures that anyone can get through the game and see the whole story. In that regard, I think it's a smart addition.

The puzzles remain consistently clever throughout the adventure. My only real complaint with the gameplay would be the extensive backtracking. Unless you're combing through environments, you'll need to come back and forth a lot to grab items, combine things, or talk to characters.

The game gets a lot of mileage out of each area as a result, but it can be tedious to constantly move between the same 3-4 areas as you try to gather the correct items and solve the puzzles before you. 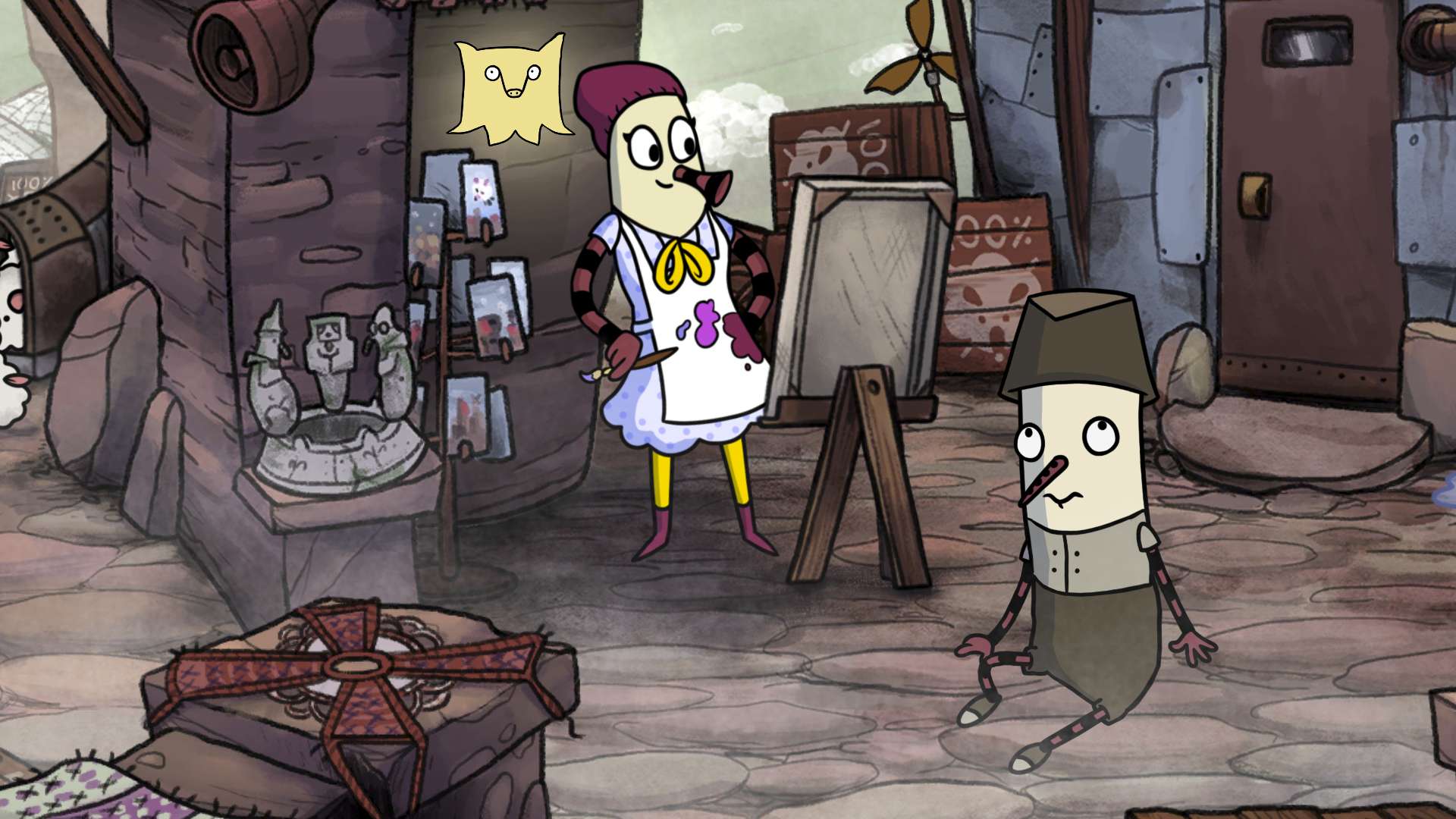 The Inner World: The Last Wind Monk has a very strong art style that uses hand-drawn animation to great effect. The art style is colorful and detailed, providing consistently interesting environments to explore.

Character design, especially the flute noses, is great and illustrates the subtle difference between the two groups of people. Barring a few awkward deliveries, the dialogue is also well performed, and punchlines hit right on the mark.

All of this combines with a lofty and whimsical soundtrack that keeps things light while also expounding upon the curiosity of the game's world. A strong use of strings and woodwinds combines with a cheerful tempo that would fit perfectly into any modern animated film.

I thoroughly enjoyed my time with The Inner World: The Last Wind Monk. The story of Asposia, the flute noses, and the journey of Robert all felt refreshing and unique. Through it all, the game never lost that charm that adventure games are known for.

If you're a fan of classic adventures, I highly recommend giving this hidden gem a shot.

A copy of The Inner World: The Last Wind Monk was provided to PS4 Experts for review purposes. PS4 version was tested on a PS4 Pro.