The fourth wall has often been left alone in gaming. At least, until recently. As new developers try their hands at unique experiences, a select few titles have sought to shatter this fourth wall and create meta experiences that stand out from the crowd. ICEY is one such game.

ICEY is a 2D brawler for the PS4 where you play as a young girl seeking answers to her mysterious past and the world around her. You're guided by a narrator who seems to have your best interests in mind, but it's completely up to you whether you obey his commands or go against them. Does this game manage to break down barriers, or does it run head-first into a brick wall? Time to find out!

A World Where Nothing is as it Seems

You would be forgiven for seeing ICEY and thinking that it’s just another action game with some fancy hack-and-slash combat. You could make that assumption from looking at it, but you would be doing yourself a major disservice.

While the premise is simple, ICEY manages to truly stand out from the pack by offering you the ability to directly disobey the game’s narrator. By default, he is voiced in English. I didn’t like the English voice actor’s delivery, so I switched to the game’s original narrator, which speaks in Chinese.

The problem with the English delivery was the voice actors lofty performance. His style of narration didn’t match the situations at all, and his tones betrayed the emotion that was supposed to go into each line. On the other hand, the original narrator does an excellent job with his voice tones.

For example, when you decide to directly disobey the narrator, or put yourself into direct danger despite his advice, you would expect him to get frustrated with you. The Chinese narrator raises his voice and delivers his line with an excellent level of anger and frustration during these moments, so I highly recommend this option.

As a result of these branching paths, ICEY has several different endings. While a playthrough of the game only lasts a couple hours, you’ll want to play until you’ve seen the game’s true ending to find out how it all connects. It will seem very confusing at first, but ICEY’s story manages to expertly walk the line between sci-fi intrigue and goofy meta jokes.

I don’t want to go into detail since this is best experienced without any prior knowledge. That being said, you can expect some hilarious rants from the narrator when you go against the game’s design. In some cases, he will become so frustrated that he will pull you out of the game just to scold you and offer what he believes you want instead.

The immediate story involves ICEY hunting down a villain named Judas, who we slowly learn more about, but I found myself caring less about the main story, and instead looked for any and all opportunities to get the narrator all fired up.

That doesn’t stop the rest of the story from being interesting, though. If you dig deep enough, there’s a serious tale to be told here as well. While the juxtaposition of serious and fourth wall breaking can be jarring for the overall tone, I wouldn’t change a single thing about ICEY’s story.

It’s exciting, somber, meta, and funny all in one. Truly, this was an experiment in both storytelling and game design, but it’s one that I absolutely adored. Let’s see if that gameplay holds to this standard. 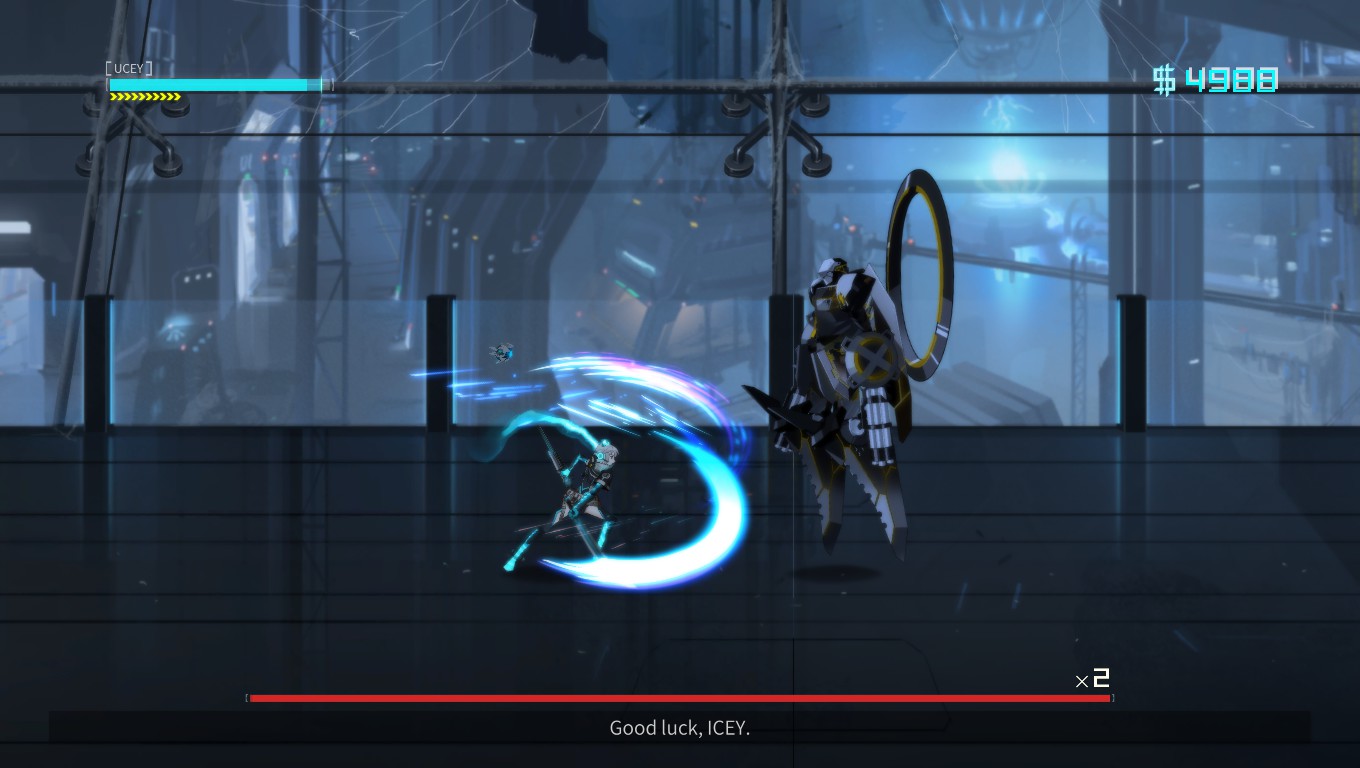 Despite being an indie effort, you could have convinced me that ICEY was developed by Platinum Games. I say that as a huge compliment to both the style and combat present in the game. While perhaps not as deep as other brawlers, ICEY’s combat is a visual feast, with an incredibly smooth frame rate, and some killer finishing moves.

You can purchase and upgrade combos with currency you find and earn, but you’ll often find yourself resorting to button mashing with pretty consistent success. The enemies come in a nice variety of options, ranging from small robots to larger more menacing variations. All of them bring a different challenge to the table.

One enemy type, who has massive metal hands, will grab you and lock you into a slam attack if you get too close. Another type that resembles a metal firefly, will fire lasers that can quickly drain your health if you get caught in their path.

Once enemies have reached a low state of health, you can trigger flashy finishers with the circle button that often have ICEY dashing across the screen with her blades. When enemies go down, you can hold the attack button to absorb the fragments they drop and release for a screen-filling attack that helps turn the tide.

They’re no slouch, but the bosses are where ICEY truly shines. Each boss felt wholly unique to me, with a wide range of sizes, speeds, and attack patterns. For example, one boss resembled a cyberpunk Pac-Man who would charge across the screen gnashing its metal teeth. Another boss was a stylish mech that would dart across the screen, firing bursts of ammo.

With the upgrades and combos, ICEY’s combat has some depth, but it’s not going to rewrite the genre. Could it have used more options and weapons? Perhaps, but what we have here is polished to a mirror sheen. It’s incredibly smooth and functional in a way that most brawlers hope to achieve. Action game fans will not be disappointed.

The production values on ICEY are nothing short of stellar. Again, this is not what I would expect from such a small development team. The backgrounds are all hand-drawn with excellent detail. The enemies and ICEY herself have sharp and defined designs that help them stand out in the chaos of the combat as well.

As I mentioned before, the framerate is rock solid throughout. It looks great and it plays even better. I do massively prefer the Chinese narrator over the English one, but you have the option to choose, so it’s really a non-issue for me if I can fix it in the options menu.

The final piece of the presentation is the game’s soundtrack. Here we have music that uses a sci-fi foundation of synthetic beats to keep the tempo up. On top of that, there’s a nice mixture of tracks that set a mild tone, and tracks that enhance the combat with aggressive beats and sounds.

Little touches of piano, choral moments, and some string instruments help the music stand out from what you would expect to hear in this type of game. While not every track hits home for me, there are some standout moments in ICEY’s soundtrack where I really felt like the music hits home and offers something as unique as the game it scores.

Looking back on it all, ICEY is a game that you can finish pretty quickly. It has plenty of secrets and should absolutely be seen to its final conclusion. It may not last long in the moment, but it will stay with me for a long time to come. Truly unique experiences like this don’t happen very often, and for that, ICEY absolutely deserves your attention.