Watch the PS4 be taken apart part by part:

It goes without saying, but if you take apart your PS4 down to the individual hardware, it's going to void your warranty. Certain things like changing the hard drive won't, but a full tear down will.

Steps to tear down your PS4: 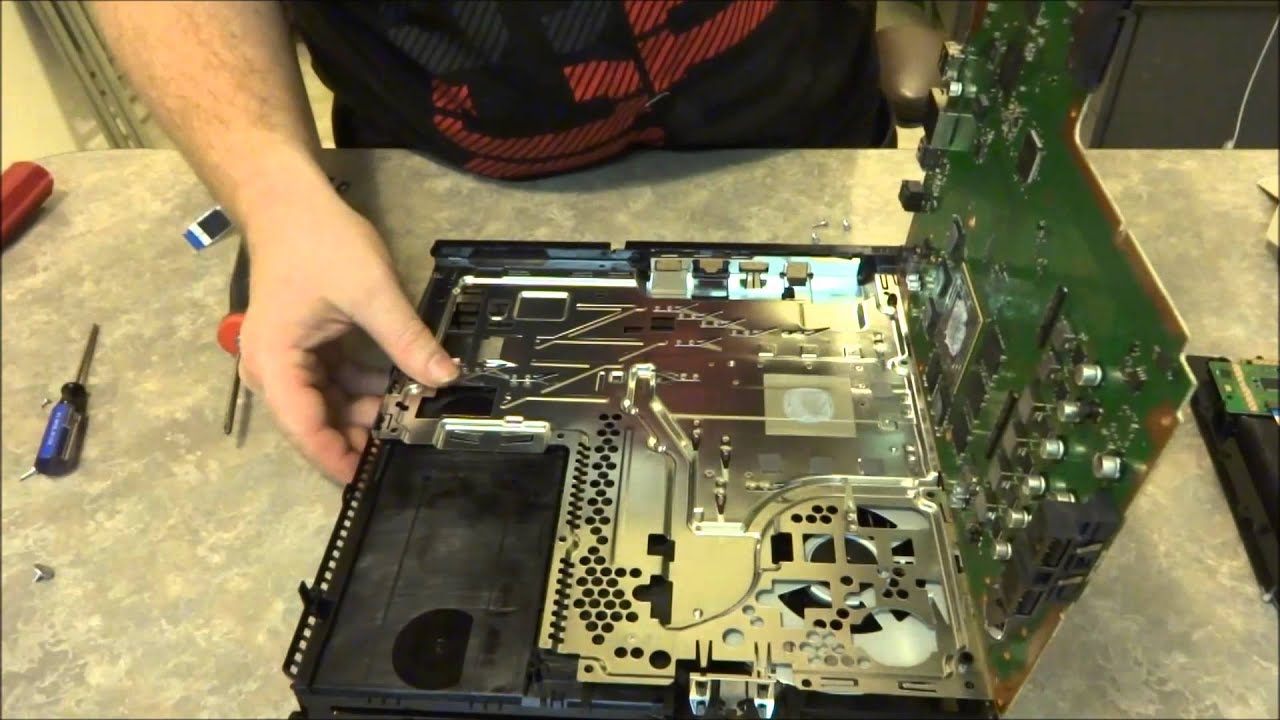 Check out the video if you want to see it happen in real-time:

If you'd like a text version of the process, you're in luck! We've got the only one you'll find on this side of the internet right here:

From here, you can continue pulling out pieces like the disc drive if you'd like, but at this point we are past the point of simply cleaning or maintaining the inside. That being said, if you're disc is stuck, this is the point where you can remove and access the disc drive.

Check out the video above for a quick breakdown, and join us for the text version of the process below:

As always, with these tear downs, it's important to keep track of your screws and carefully disconnect any wires or cables using pliers. Taking it apart it's too hard, but putting it back together can be challenging, depending on how well you kept track of everything.

Why Would I Take Apart My Console?

Taking apart the PS4 to the point described above should only be done if the console is outside of its warranty. If you change out the hard drive it's no harm, no foul. If you take it apart to the point where nothing's left inside, then you've broken your warranty.

The most obvious reason for taking apart your PS4 is to replace the hard drive (see the link below for our guide on how to do this). There are other reasons though. For example, if the system is running really loud, you may consider opening it up to dust out the fans and the internals.

If you're feeling advanced, you can also replace the thermal gel on your console's GPU. after removing it using a torx #8 security, a small phillips head screwdriver, and of course the thermal compound. The best one to use is Arctic MX-4 Thermal Compound. Clean off the old thermal gel using rubbing alcohol and a Q-tip before you apply a pea-sized amount of the thermal gel.

Remember the old yellow light of death on the PS3? This was an issue most commonly associated with bad thermal gel, so replacing the one on your PS4 isn't a bad idea after a few years.

How to install an SSD (solid state drive) into your PS4

How to I Take Apart the Controller?

While we've focused on taking you console apart, I think it's worth mentioning that the controller comes apart as well. There are multiple reasons why you would do this ranging from simple cleaning, to replacing the battery since it is internal and will eventually lose a charge. Follow these steps to get the controller open:

At this point you will have the controller full opened and the battery will be exposed. If you need to change the battery out, do so by using blunt forceps to gently unplug the battery from the motherboard. At this point you can take it out and replace it. Now we'll dive a little deeper to full disassemble it:

With this knowledge you can replace parts as needed or mod the outer casing as you see fit. Have fun!

Recommended:
Check Out These Other Articles!

Are capacitors still charge n for how long n wat punch if u touch it
I'm trying to install an SSD in my new Limited Edition Battlefront PS4, but the faceplate just will not slide off like it did in your video. I am concerned that the special edition may have somehow been designed differently, thus making this impossible. I realize this is unlikely and have thus far found no evidence suggesting so, but I would like some additional advice before I potentially damage my brand new console.
I can confirm this and my faceplate is not shiny but mat maybe that makes difference Model i have 1TB CUH-12168
Hey Joel, My name's Bradley and I'm one of the writers on PS4 Experts. I did some research in regards to your question. While I didn't find anything saying the design was different, I did find a video on YouTube where an owner of the console replaced the hard drive in the system. I didn't see him do it, but it seemed that he was able to do it without hassle. If I find out anything else I will let you know. Here's the link to the video: https://youtu.be/jyWRUVfgxNs Best of luck! - Bradley
my system took a crap (no power) on me with a game still in it I have a cuh 1215a model and no manual eject screw. how to I do this to exchange my system.
My HDMI port messed up. Can I take it a part and get to the port so i can bend the nails back into place or would I have to replace the whole port?
I took the ps4 apart to clean and replace gel, but since putting it back together, I have had a few issues, most of which I have now fixed. But the two remaining issues are that my controllers are acting really dodgy, mic keeps cutting off, analogs keep being glitchy? And the other remaining problem is that my eject button don't work, but I'm pretty sure I know whats wrong there it's just the controllers I can't understand why taking the ps4 apart would affect the controllers in such a way. Can you help!?
Does any one know where you can buy replacement rear ps4 seld adhesive screw covers from ? Thanks
Thinking of getting a console case and motherboard, I've repaired lots of ds4 controllers, so I know I can give it a good shot, but realistically, is it worth doing/is it possible??
I'm wondering if someone can help me! In dire need as I love my new custom controller! So I've customised my controller and only changed the shell and mostly all the buttons! I have made sure everything is in the right place and plugged in correctly. However I'm experiencing strange problems! My controller works completely fine the the PS menu but when I go into games the buttons decide not to work at all apart frim the PS button. I reset my controller in a game and then the buttons decide to work but they have a mind of their own and for example in Need For Speed the car will move on its own... and in Call of Duty it won't shoot at all. I'm confused how I have to reset the controller before I attempt to play any game or app on the Playstation! I have plugged my ps4 controller into the ps4 aswell to see if it needed to re-sync or anything but it's still acting very strange in games... but I couldn't have put anything together back wrong because it all works perfectly in the PS menu... Please help me someone! Thanks!
I have a model CUH-1215A and all i get every time i turn on mu ps4 is a security error
Hello, It would be helpful if the video mentioned at the beginning that you don't need to remove the screws to remove the hard drive. I removed the warranty label, and just realized that you don't need to do that to access the hard drive. Garett