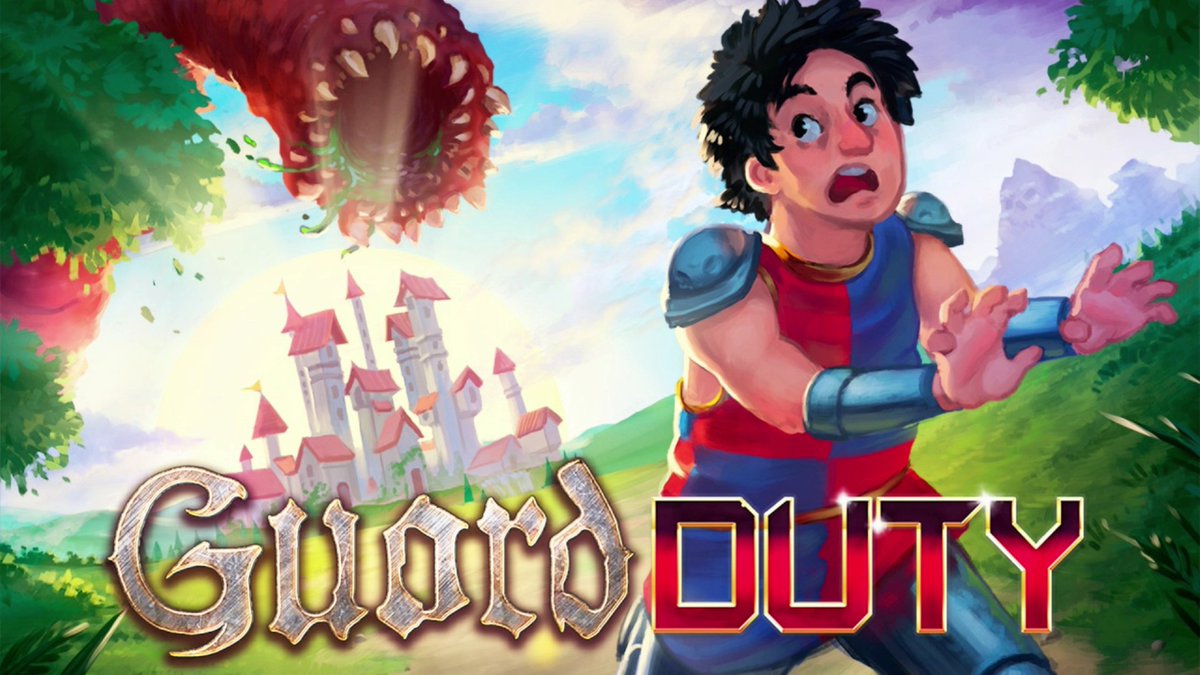 One of the first genres I gravitated towards as a young gamer was the point-and-click genre. I cut my teeth on games like Myst, Riven, Monkey Island, Day of The Tentacle, and countless other small titles that I came across in my adventures (I wasn’t above those packs of five or so games you found for PC at the store).

Guard Duty for PS4 channels the golden age of point-and-click adventures with a lovingly rendered pixel art style, a whacky premise, sharp dialogue, and more puzzles than you can shake an inventory at. Is all of this enough to make it a return to form for the genre, or does this tale of two vastly different time periods get lost in history? Let’s find out.

The premise of Guard Duty was the thing that caught my eye. A game where you play as a character in a medieval kingdom, and as an agent in a dystopian science fiction future? Yeah, I had to see that. How does one reconcile those two different time periods, let alone craft gameplay across them both?

Well, let’s start with the story. After an edgy and decidedly science fiction style opening cutscene, you’re taken back in time a thousand years to the medieval kingdom of Wrinklewood.

The majority of the game sees you playing as Tondbert, a guard for the Castle of Wrinklewood and someone who enjoys binge drinking on his birthday (I can relate). Having woken up from a bender, Tondbert finds himself in a pickle when he realizes that, among other things, his uniform is missing.

Once you get into the story, Guard Duty offers the kind of wacky scenarios you would come to expect from this type of classic adventure. For example, an early accident results in Tondbert unable to properly communicate until he completes a series of tasks to obtain the medicine he needs for his swollen face. The voice acting for this segment is hilarious, by the way, as the muffled way he speaks in this condition creates a dire need for subtitles (which are present, of course). I had a good laugh from this early segment.

Humor is indeed one of Guard Duty’s strongest elements. The jokes don’t always land, but I had my fair share of chuckles throughout the adventure. If anything, Tondbert himself is quite endearing once you get to know him.

The story takes a short amount of time to get going, but once it does you’ll find yourself intrigued by the mystery surrounding everything, not the least of which is how they’re going to tie this into a sci-fi dystopian future.

To avoid any and all spoilers, I’ll simply say that the way they connect Tondbert and Agent Starborn in the future is pretty great. It’s not incredibly original, but the way the transition happens from one style to another is pretty slick.

Agent Starborn himself seems to be a parody of David Hayter’s performance as Solid Snake in the Metal Gear Solid series. Most of the lines are quite good actually, and the neon green codec screen when he communicates with his allies is a nice nod to that series as well.

There are times when he slips into an accent that betrays the voice he’s going for, an example being that he pronounces “Ma’am” as “Mom,” which caught me off-guard. Otherwise the impression is commendable and had me grinning as a Metal Gear fan myself.

The overall story of Guard Duty feels complete and offers a satisfying ending for everyone involved, but it comes a little too quickly. The game can probably be finished in less than four hours, but that’s not really an issue for me, given the $10 price point.

The issue I have with the length, and it’s really a compliment, is that the game kind of glosses over certain events and sections that sound really compelling. There are hints in the dialogue at things that transpired which we never saw due to the switch in settings. It’s frustrating because I absolutely loved the premise, and I would have liked to see a little more meat in the story for Tondbert, but especially for Agent Starborn.

The latter character has a good amount of screen time, but there could have been a lot more to his part of the story. It ultimately left the story feeling slightly rushed at times, but for those who want a complete experience, Guard Duty will give you a satisfying beginning, middle, and end.

In terms of gameplay, Guard Duty is your classic point-and-click adventure with very few bells or whistles to speak of, which is both good and bad. On the one hand, it keeps the gameplay light and focused on the puzzles.

On the other hand, I would have liked some quality-of-life additions like the ability to warp through an area instead of waiting for the character to walk across the screen, and the option to highlight all interactive points in a scene. Neither of these things would drastically change or improve the experience as it works fine on its own, but they would have been nice to see.

A Nostalgic and Evergreen Presentation 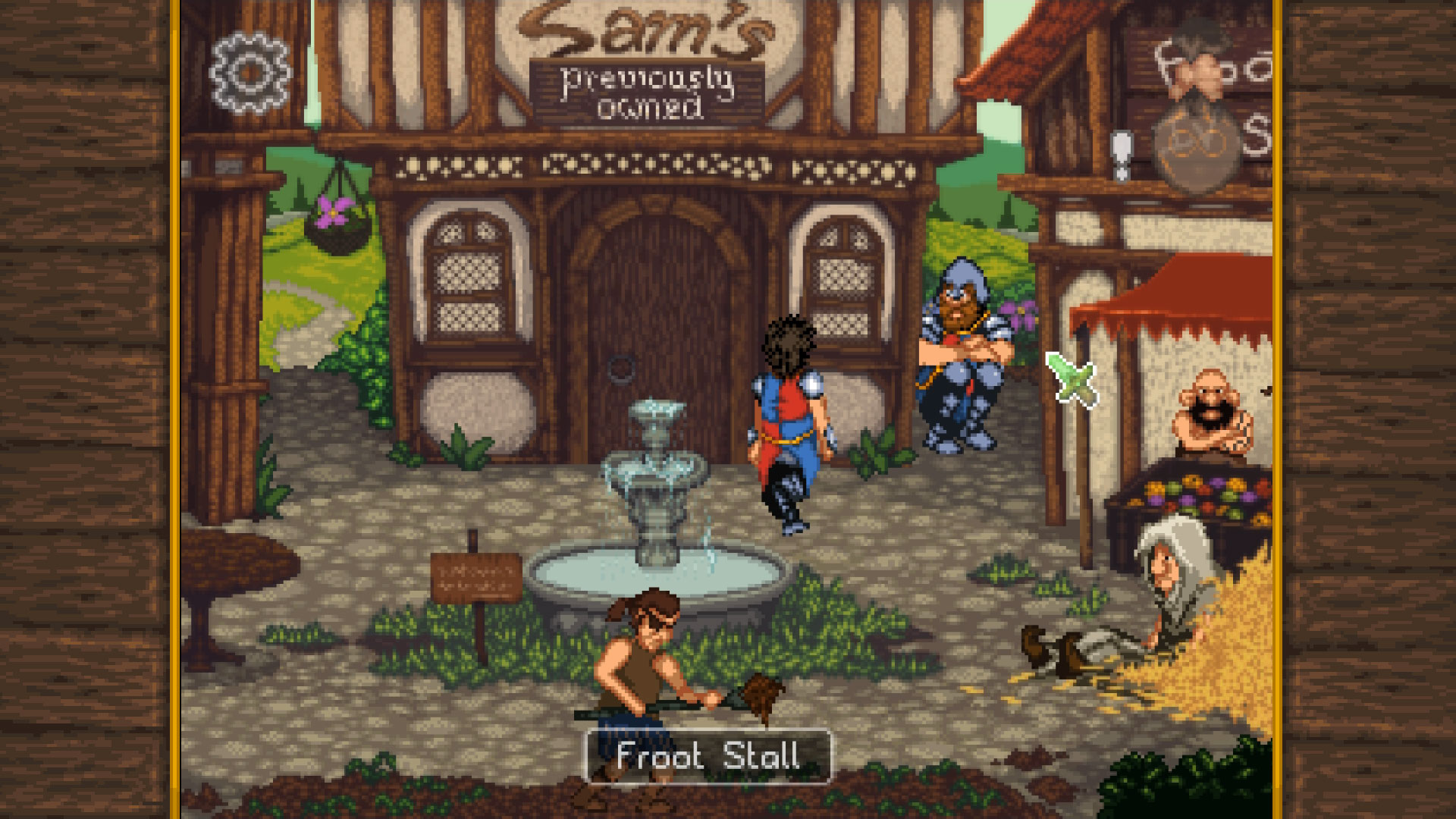 Guard Duty effortlessly captures the look and feel of a classic point-and-click adventure. It’s even rendered in a 4:3 aspect ratio with wooden borders on either side of the playable screen. This didn’t bother me, but some may find it odd that the game doesn’t display across the full screen. For me, this added to the nostalgic feel and I barely noticed it during my playthrough.

As I mentioned earlier, the voice acting can be hit-or-miss, but the main characters turn in solid performances throughout. Some of the side characters have voices that grated on me, but the vast majority of the spoken dialogue felt like a good fit.

The use of a pixel art style, with some basic art for specific scenes, feels like the game was pulled directly from the decade of titles that inspired it. Music across the board was also good, but nothing in particular stood out to me. That being said, the soundtrack during the sci-fi portions of the story offered a high point in the music for me.

Guard Duty is the kind of game that won’t appeal to everyone, simply due to the fact that it’s rooted in a bygone era. Those who grew up with these kinds of games may find the puzzles to be a little too simple or the length a little on the short side, but there’s no denying that the power of nostalgia is strong with this one.

The premise could have used a little more love as it’s clear the writer or writers had more in mind for the game’s events, but for the asking price, I’d gladly recommend a stint of Guard Duty to anyone interested in experiencing a fresh take on a classic formula.

A copy of Guard Duty was provided to PS4 Experts for review purposes.