One thing I’ve seen a lot of on PSVR are wave-based games. Most of them are shooters, but the concept remains the same across them: survive through waves of enemies and fight a boss every few levels or so. It’s a good fit for VR because you’re often in one place and constantly engaging with everything coming at you.

As more and more of these came out, however, there was a need for creativity if you wanted to stand out. While Good Goliath can be considered a wave-based action game, you’ll soon find that this giant is hiding a few tricks under their massive sleeves.

One Giant Step Forward For The Genre

Good Goliath places you in the ample shoes of a massive, well, giant, and offers a sort of storybook narration to give you some context in each of its levels. With three distinct worlds, boss encounters, and a huge bevy of waves in each, I feel like the content is pretty on the mark for the price.

When you look at the level select you’ll see a total of 9 levels (3 per world), but keep in mind that the first two levels are composed of numerous waves and checkpoints if you need to take a break. The boss fights are also their own multi-stage events that take a considerable amount of time to defeat.

In a clever addition, the game also lets you unlock new variations of your giant hands in VR, such as the appropriately repulsive “booger” hands where one of them is covered in green globs.

While you’re stationary in the levels, you can also see your chest and shoulders in VR, which, combined with the detailed hands, really helps place you in the game’s world. Now that we’ve set the stage, it’s time to find out what you’ll be doing with these waves of enemies coming at you.

The core mechanic in Good Goliath is throwing, and the game does it very well. I would recommend angling your PlayStation Camera upward if you’re tall and standing (which is how I played), so you don’t lose tracking when you’re reaching above your head.

As waves of enemies come at you, they will throw or launch items at your head depending on their specific type. This can include everything from pitchforks, to barrels, to barrels of TNT, cannon balls, halberds, and more.

Tilting your head and dodging in place will help you avoid damage, but to succeed you’ll need to catch these items and hurl them back. In the heat of battle, this means sweating, a lot. I’m convinced that, at one point, Good Goliath was a fitness game, because I was sore for days after marathoning the title in VR.

The rhythm of catching and throwing items is excellent, and the difficulty ramps up considerably as you progress. To keep things interesting, Good Goliath also offers an “uptrade” mechanic that, for me, was a game-changer in this genre.

It’s not about just taking out enemies and destroying the environment (something that’s fun in the first world, but less emphasized in later ones). To truly excel at Good Goliath you’ll need to leverage the ability to trade items with enemies by throwing something at them.

As an example, you’ll see enemies in the first world carrying TNT barrels. Now, they won’t throw these at you. Instead, you’ll need to hit them with something, which will in turn launch the barrel from their back and give you the chance to catch it and throw it back for devastating results.

This is just one example. Another is a trick in the second world where you can throw pirates into the water and catch a thrashing shark to throw at enemy ships. This is also how you get health in the form of cakes. You’ll need to hit bakers that float by on balloons or walk past your vision to get their cakes that refill your health.

Constantly thinking about how to utilize this “uptrade” mechanic helped keep the action fresh throughout numerous waves. Without this, the game would be fine, but with it, I really felt like the gameplay was far more engaging as a result.

All of this culminates in boss fights with other giants or one of the big three baddies in the separate worlds. In these fights, you’ll have to contend with chunks of debris thrown at you that you’ll need to punch to destroy.

There’s an opportunity for explosives here within blue chunks of debris as well. The main boss fights in Good Goliath bring all of this together into huge and bombastic battles that span across multiple phases.

These require accuracy, speed, and a keen understanding of the mechanics at play. They were great ways to test the mettle of players. Really, the only things I would change in Good Goliath are small. I would have liked to see how many waves were left so I could decide if I wanted to stop and come back at the last checkpoint (which reduces your score).

I think it would have been cool to mix in some more mobility, even if that means levels on rails where the giant walks forward on his own and you dodge and throw like normal. It could have mixed up some of the gameplay.

Another world or two would have also really driven home the value proposition here, but I find that there’s some good replayability in going for higher scores or showing others the experience. Really though, the extra mechanics here make this much more than just another wave-based title. Combine that with great tracking when you set up your camera properly, and some great polish overall, and you have a title that’s guaranteed to offer a good time. 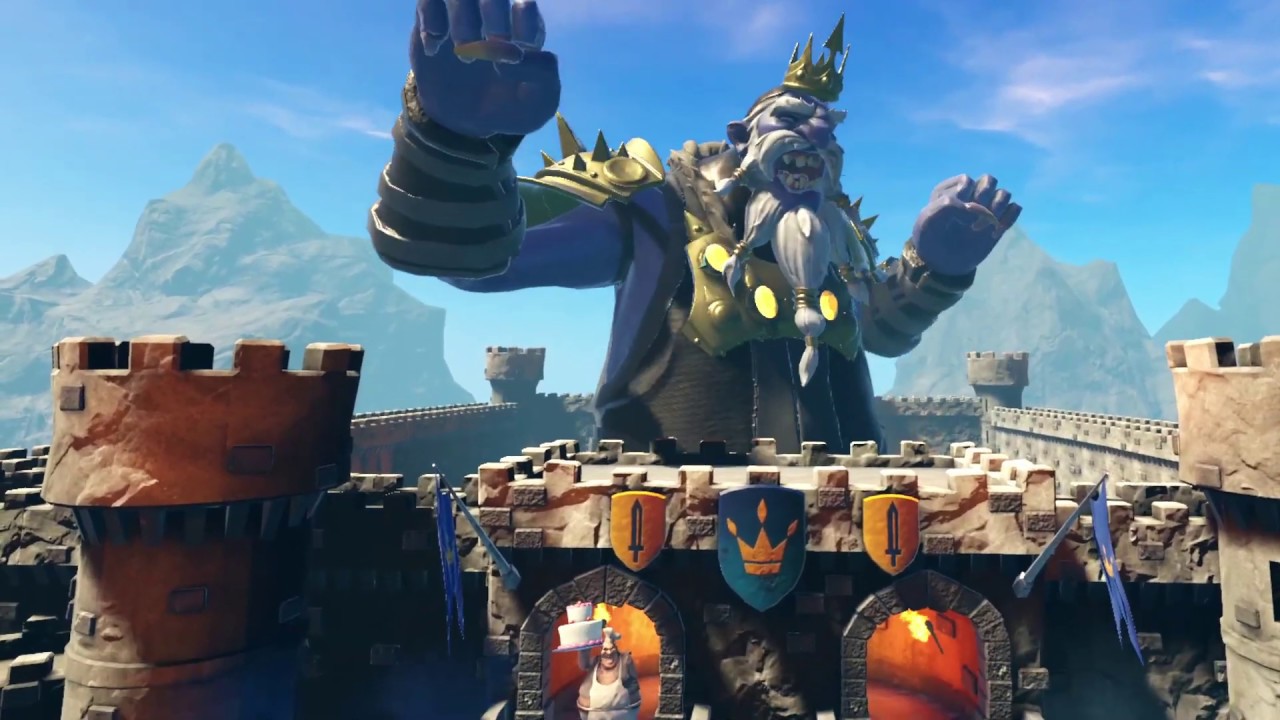 Good Goliath’s presentation starts with crisp graphics and beautiful colors in PSVR, but it goes past that with some wonderful details and flourishes. While destructible environments aren’t found throughout the levels, they are pretty impressive in the first world.

More so is that detail on your hands, which have convincing skin and even veins running under the skin depending on your current skin. I loved the way people, and creatures writhed and panicked while you held them in your hands.

It made me feel like a human version of King Kong in VR as the helpless living things you throw back at the world appropriately do their best to escape your clutches. It’s all in good fun, of course, and no sharks were harmed in my playthrough of Good Goliath, but throwing an entire shark at a pirate ship never gets old.

Some players may find that Good Goliath is a little too light on content, but there’s no denying that the game takes the wave-based genre to the next level with its mechanics that push you to strategize not only what you’re throwing, but who you are hurtling it at.

It’s a refreshing experience, and a solid workout to boot!

A copy of Good Goliath was provided to PS4 Experts for review purposes.