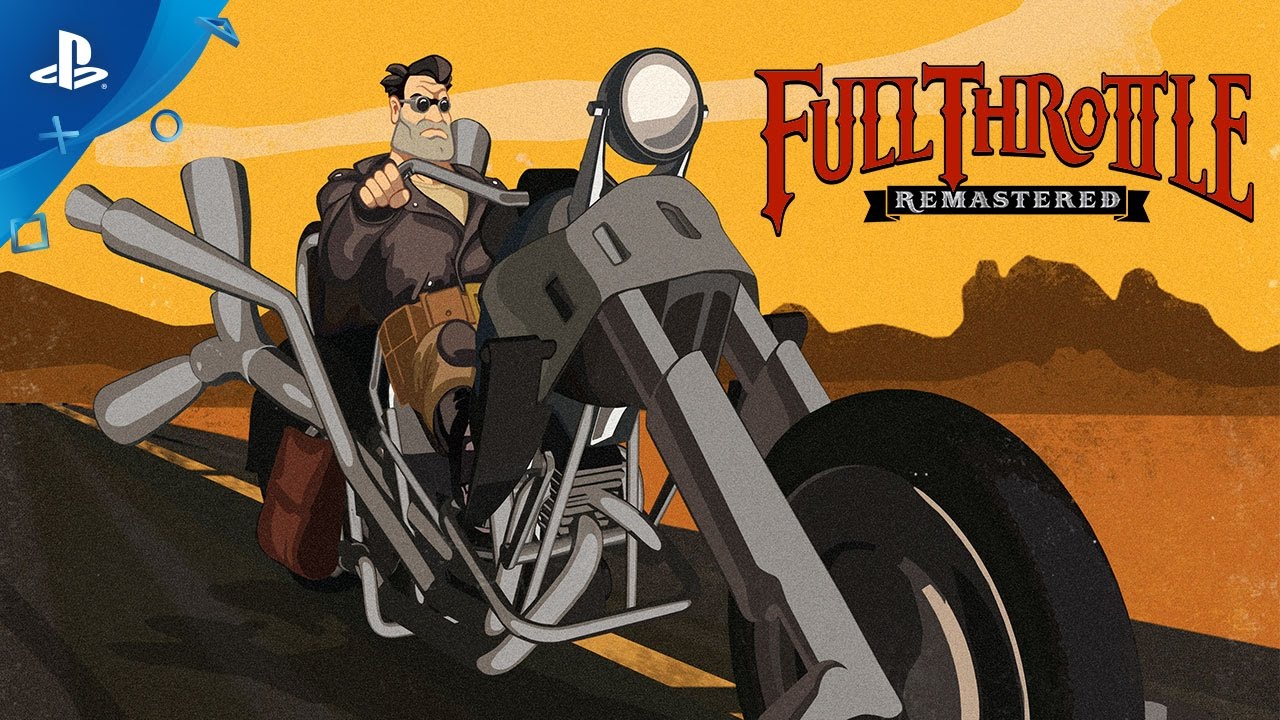 Tim Schafer is known for his work on classic adventure games, but Full Throttle was the first one he did as the head writer and designer. Thanks to titles like this, we now have masterpieces like Psychonauts. With Full Throttle Remastered, we can experience the classic all over again.

Does this bike still ride smooth, or does it crash and burn on the highway to greatness? Read on, and find out!

Full Throttle is set in a future where motorcycles and automobiles are going out of style. Instead, we're getting anti-gravity vehicles. In this world, Corley Motors is the last manufacturer of good old gas-guzzling vehicles.

In this world, Ben is the leader of a biker gang called the Polecats. The game's story starts when he and his gang overtake the limousine of Malcolm Corley himself and impress him with their antics.

He follows them to a local bar and tries to hire Ben's gang to escort him and his employees to a shareholder meeting. With Malcolm is the unseemly Adrian Ripburger (voiced by Mark Hamil, actually). While Ripburger is the vice president of Corley Motors, it's pretty clear he doesn't have the president's best interests in mind.

The game starts with Ben being knocked out after refusing to take the escort job. From there, he quickly finds himself in the middle of a vast conspiracy where he has no choice but to follow the clues.

Being a classic point-and-click adventure game, Full Throttle Remastered lives or dies on the merit of the story. You can breathe a sigh of relief, because the story here is quite good!

The voice acting is excellent all-round, with great performances from Ben, with his gritty voice, and Adrian Ripburger with his ominous tone. It's pretty funny too, with great quips from Ben himself. A particular favorite was when I told him to kick a set of tires and his response was "I'm not looking to buy."

The story manages to provide a solid amount of depth to the characters, which is a testament to Tim Schafer's writing. Of all the game's aspects, the story has aged the best. It feels fresh and new to have a comedy about a biker gang with a healthy amount of intrigue and an interesting setting to boot.

I won't say anything else about the story, as it's best to go in blind. Much more fun that way. My best comparison would be the header above. It's a comedy Mad Max with a dash of corporate conspiracy for good measure.

Mouth, Hands, and Feet: The Tools of The Trade Full Throttle Remastered is a thoroughbred point-and-click adventure. Your controller is used to move a cursor that allow you to point where you want Ben to go, and interact with the environment.

When you select something, you'll have three choices for how you want to interact. You can use your month (i.e say something), your feet, or your hands. It takes a little getting used to, but it makes for a very connected feel to the gameplay.

For example, when Ben needs to kick down a door because someone won't let him in, you select his foot, and then watch a quick cutscene of him applying his boot to the entryway. It's fun and more engaging than simply clicking like you would in another game.

It is a double-edged sword however. As classic gamers know, these old adventure games could have some seriously odd puzzles. Full Throttle Remastered doesn't escape this, or the dreaded "pixel-hunting" stigmas either.

While most of the puzzles are well-designed, they often become more difficult than they need to because you're trying to figure out which of the three interactions works for that moment. Of course, oddball puzzles are part of the charm. 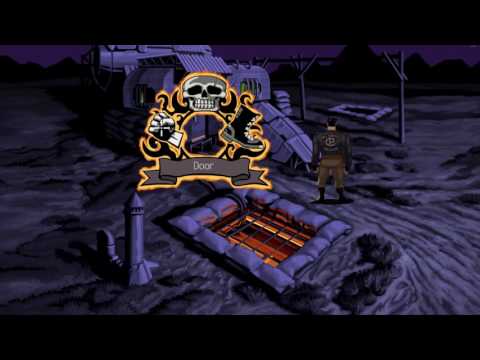 What I really can't let slide, are the combat sequences. While they don't happen all the time, Full Throttle Remastered employs moments where you're fighting with another biker on the road. You can use weapons, which can greatly affect the situation, but often it just amounts to you mashing the attack button.

This would be a problem, if the game did a better job of explaining how it works. Often I would be convinced I was winning, only to get hit once and thrown off my bike. One particular segment on a mine road drove me up a wall as I had to fight my way through fodder to get the weapon I needed to solve a puzzle.

Of course, I didn't know it was a puzzle with a specific weapon solution. It played out like any other combat segment, so I assumed any weapon would do. It also doesn't help that these segments feel clunky in both performance and animation.

It's a cool concept, but it added unnecessary frustration and trial/error to the game. Other than that, the game is your classic point-and-click adventure, with a little bit more flavor in the three interactions to choose from.

Classic or Remastered, The Choice is Yours Full Throttle Remastered can be changed to vanilla Full Throttle with the press of your touchpad. The game can seamlessly switch between its new and old graphics. There's even an option to restore classic controls if you're a purist and want to play the original version.

Now, some people prefer the old style graphics, but I actually really dug the sleek new look. Everything looks smooth and polished. You may feel differently, but you have the option for both, which is really nice.

In terms of the presentation, the game works flawlessly most of the time. During the bike riding segments and the combat, everything feels like its chugging, but I wasn't sure if it was just the animation, or if the frame rate was actually dropping. Either way, it didn't feel smooth.

Furthermore, I had the game freeze three times during my playthrough. It was usually during riding sections where the game would get stuck transitioning to a cutscene or back to the action. They weren't hard freezes, as I was able to quit the game and reload, but they were quite annoying nonetheless.

I think it's great that we've gotten remasters of classic games. Some age better than others. Full Throttle Remastered falls in the middle of this road. In some aspects, it's aged really well and still manages to be unique and creative all these years later.

In other aspects, the game fails to hold up to the standards of today's design expectations. In this regard, you'll find some frustration with Full Throttle Remastered, but ultimately, I'd say it's worth the ride...pun intended.