One thing I love about PSVR is how it’s pushing developers to try new experiences that are only possible with the Move controllers and a VR headset to truly immerse you in the moment. It’s for this reason that FREEDIVER: Triton Down immediately caught my eye. Diving in VR? Absolutely, that sounds awesome!

In this title for PSVR, you play as an experienced freediver who finds herself aboard a capsized ship that’s also sinking. Does the promise of escaping the ship in VR deliver, or is this experience too shallow to realize its full potential? Let’s find out.

An Experience That May Take Your Breath Away

It’s funny, I’ve always liked underwater settings in games, but I often find them deeply terrifying due to my own fears of the ocean depths and drowning in general. One thing I didn’t expect, but absolutely should have, was that these fears would be heightened tenfold in VR.

FREEDIVER: Triton Down is the kind of game that may literally take your breath away. While playing in PSVR, I would often find myself instinctively holding my breath alongside the character, only remembering to breathe when she herself was gasping for oxygen from a mask or a pocket of open air.

I also experienced massive claustrophobia while exploring the tight caves of the tutorial level, and more than a few times when I navigated the narrow halls of the capsized ship the game takes place in. All of this may sound like unpleasant things, but it served to highlight the experience for me. Not only that, but it reminded me that true and immersive VR can really trick your brain and body into doing some crazy things.

Anecdotal evidence of my phobias aside, FREEDIVER: Triton Down places you in the shoes (flippers?) of a freediver by trade. In the tutorial mission, you get your bearings by exploring some underwater caves.

It’s not long before you come across some ancient ruins, and the game introduces you to the most interesting element of its story. With the opening finished, the next thing you see is the event that capsizes your ship and sets of the main portion of the game.

With water filling up the space around you, and your bunk beds now a part of the ceiling, FREEDIVER: Triton Down is disorienting in more than a few ways. As you make your way through the ship, you can find option audio logs that flesh out some of the characters more, with solid voice acting throughout.

The game’s ending comes fairly quickly after a few hours, and left me wanting to know more about the mysterious elements that game introduced in the opening level, along with the intriguing ending it left off on.

Length wise, I feel like FREEDIVER: Triton Down is solid for the price, but I just wish they had either gone all in on the fantastical elements of the story or left them out entirely. Teasing them, only to leave questions answered left me wanting more from a narrative perspective.

Thankfully, the gameplay makes the story’s shortcomings pretty easy to forgive. You have varying options for a vignette that helps with motion sickness, or you can turn it off completely. Snap turning, along with button-based swimming is also an option.

The way the game recommends you play is by using the Move controllers to actually swim forward. Pushing and pulling with your hands also lets you rotate and go up or down underwater as you would in real life.

It works incredibly well, and while it gave my arms quite the workout, it’s undeniably an immersive way to play a game like this. The option to switch between the control schemes is there too if you want to switch to give your arms a break or get past one of the more difficult segments.

One thing I didn’t realize until later in the game is that you can grab onto just about any surface with the move button. The game does explain this in the tutorial, but one thing that bothered me for a while was how I would find portable oxygen tanks and struggle with holding myself still long enough to press the mask to my face.

A simple solution to this, of course, was to grab something like a wall or ledge nearby to stabilize myself while I refilled my air with the other hand. A pro tip for those who dive into this PSVR title (pun intended).

Since you are a freediver here, you don’t use any tanks or masks like a traditional scuba diver. This means that you’ll need to monitor the oxygen meter on your right wrist so you don’t run out of air. This mechanic takes the intensity up to 11, especially when you’re trying to get through areas of intense current, often by grabbing anything you can to pull yourself forward.

Other tactile elements, like opening doors or throwing switches, feel great from a tracking standpoint. A small nitpick I had, however, was the flashlight, which you have to grab and hold in your hand as a cord keeps it connected to your suit.

Trying to hold the flashlight in one hand while turning one of the door cranks with the other just doesn’t work, and doing it in the dark while underwater is just too much stress. I would have preferred the flashlight to be a shoulder-mounted option that you can toggle on and off.

Audio logs too seemed to require that you carry them with you to hear the entire message. Realistic, yes, but not practical when time is of the essence. Simply touching it and having the audio play while I dashed back to the nearest tank or air pocket would have been ideal.

These small issues did little to deter me from finishing the game in a single sitting, however. The pacing of the gameplay, the variety of the environmental puzzles, and the constant pursuit of that next breath of air makes FREEDIVER: Triton Down one of the most harrowing experiences I’ve had in VR. 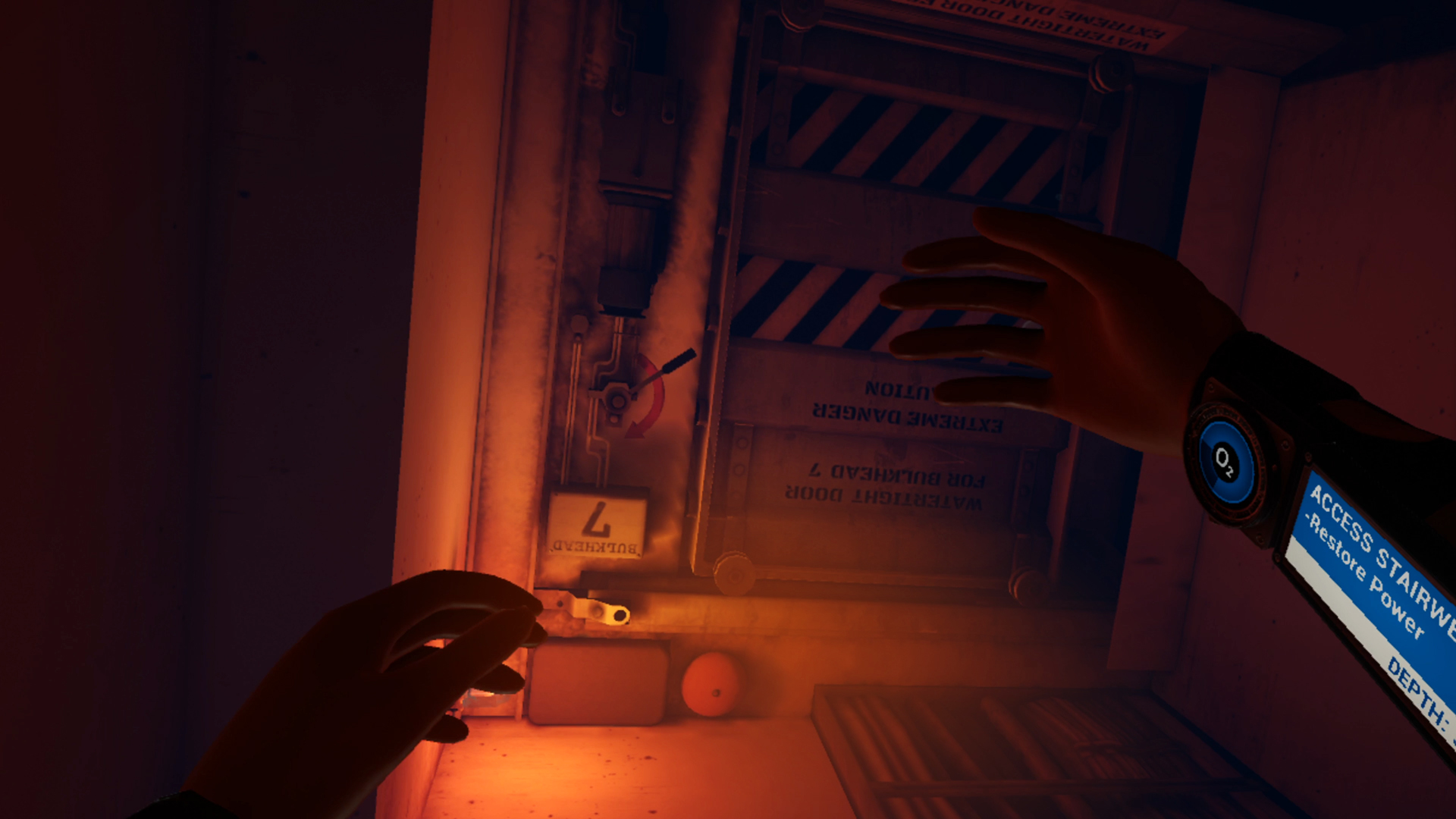 I can’t really fault FREEDIVER: Triton Down from a presentation standpoint. Perhaps the character faces could have been more convincingly animated, but everything in this game’s graphics, audio, and immersion all serves to create a wholly convincing experience from beginning to end.

For those who doubt that summary, please see my story about involuntarily holding my breath in the above section of the review. This is VR at its finest: providing a convincing, immersive, and incredibly compelling experience that convinces every one of your senses that you are there. I want to see the developers at Archiact take this concept into a full-length title, because if they do, it could easily be one of the best titles on any VR headset.

In the meantime, don’t bother testing the water. For the price, this is one experience you should dive right into.

A copy of FREEDIVER: Triton Down was provided to PS4 Experts for review purposes.