Far Cry games have always been about survival against all odds. From Jason Brody in three, to Ajay Ghale in four, the protagonists of the Far Cry series have always been at the forefront of a situation where they have two choices: adapt or die. In that sense, a game like Far Cry Primal has always been in the cards, but it wasn’t until now that we were ready for it.

It’s time to put away the guns and the toys ladies and gentlemen, because we’re going back to 10,000 B.C.E to a time when adapt or die were the only choices anyone had. It’s a time when the various tribes of humans were all fighting for the top spot on the food chain. In a time like this, though, there were a lot of contenders.

So, it’s time to find out if Far Cry Primal is the evolution the series has been waiting for, or if this game should have stayed in the past.

The First Story of Survival

The stories in past Far Cry games have usually placed our heroes into a situation with a psychopathic villain and they usually need to save their friends or in Far Cry 4’s case, an entire country. The story of Far Cry Primal is a little more personal and not just for me, it’s pretty personal for the whole human race.

The story of Far Cry Primal takes place during the Mesolithic era around 10,000 B.C.E. You play as Takkar, a member of the lost and broken Wenja tribe who seeks to bring his people back together and allow them to flourish in a valley known as Oros. This area has a wide range of foliage, animals, and plenty of resources, which makes it a target for other tribes as well.

During this time in human history, various tribes were migrating to find a more permanent solution for their needs. Far Cry Primal explores these themes by placing you in the shoes of a man whose only goal in life is to survive and see his people thrive. It’s a simple, but powerful premise. I dare say, it’s even primal?

Puns aside, this new entry in the series is a far cry from the previous entries (I swear, I’ll stop with the puns). The new setting feels a lot more natural than the previous games, and I don’t mean that as yet another joke, I mean that the game’s mechanic feel a lot more at home in this time period.

No longer are animals slaughtered simply for their skins, instead you use their meat, their bones, and their fat (more on that in the next segment) like the people of this time really would.

Nothing goes to waste in Far Cry Primal, and it’s that fact that adds so much to the world. The other tribes present in the game are the Udam and the Izila, so let’s talk about them for a moment. The Udam represent the neanderthals of the time. They are a dying species that relies on inbreeding and cannibalism, along with some twisted beliefs to justify the last one.

Their leader, Ull is seeking a way to stop them from dying out, and he’s willing to crush and subsequently eat anyone who gets in his way. On the other hand, the Izila are a tribe that hails from the cradle of civilization: Mesopotamia.

They are more advanced than the other tribes and possess a keen understanding of fire and how to manipulate it for their needs. Their villages are more robust with running water and irrigation as well.

The story in the game is simple but effective. Far Cry 3’s story was the high point for me as I didn’t really feel for any of the characters in the fourth game. In Primal, there’s a deep seeded part of me that resonates with Takkar’s story of survival.

People are expecting some kind of grand and robust story filled with complex characters, but to do so would betray the entire authenticity of the game and its time period. 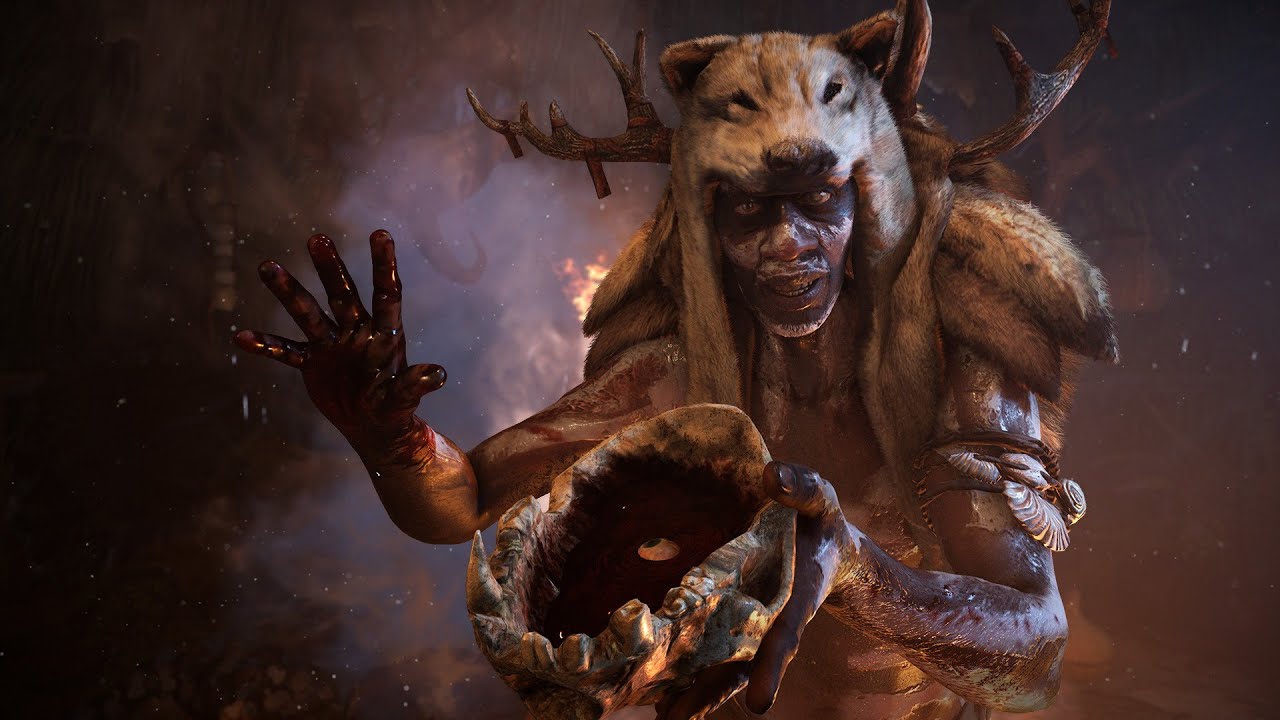 People weren’t consumed with politics or complex beliefs back then. Humans during this time were simpler and more focused on the immediate situation. I didn’t go into Far Cry Primal expecting a story that was filled with explosions and twists and I don’t think anyone should. Could it be better, sure, but I without compromising the time period and its people, there’s not much else it can do.

Personally, I love the more surreal missions in Far Cry games. These are usually induced by drugs, but in Primal they are done through drinking strange concoctions given to you by a strange shama (so drugs still, I guess?).

It’s worth noting that the entire game is voiced in a different language. You have subtitles for English to translate, but at no point does anyone speak English to you. Instead, the developers created their own language in the game based on help from professional linguists and historians who aided them in tracing many of today’s words back to their roots.

The language in the game feels perfect. It’s simple, but with enough complexity and emotion to convey what the characters are trying to say. I find myself picking out specific words and using them in my everyday life, mostly on my dogs to see if they’ll understand. I think a part of them does.

So, in terms of story, Far Cry Primal isn’t going to make you rethink your life choices, but it is going to give you a strong premise of a world with unique and possibly insane people fighting for their very survival. It’s Far Cry boiled down to its roots, and I love it.

The Far Cry Formula, Polished to a Mirror Sheen

Far Cry games have established a formula much like other Ubisoft titles. When you play a Far Cry game, you expect an open world, crafting mechanics, plenty of animals to hunt, and whacky characters to do side missions for. All of that is here in Primal and it’s been amped up to boot.

For example, the crafting mechanics have an added bonus now of being more robust and interesting. Your weapons can be upgraded, as can your meat and loot sacks, but you also get upgrades for other various tools and weapons not seen yet in the series.

There are also separate resources for upgrading your village which brings its own benefits. In addition, resource stashes filled by your villagers add even more for you to horde in the name of upgrades. Everything has a use now as well. Meat is no longer solely for bait. Instead it can be used to attract animals, and as a base method for healing.

Animal bones are used to craft new clubs and weapons, while wood is used for arrows and spears. Animal fat can be used to ignite your weapons on fire for added damage or a means of seeing in the dark. Everything connects in Far Cry Primal in a way that the series has never seen. All of it feels more useful and purposeful instead of mindless gathering. 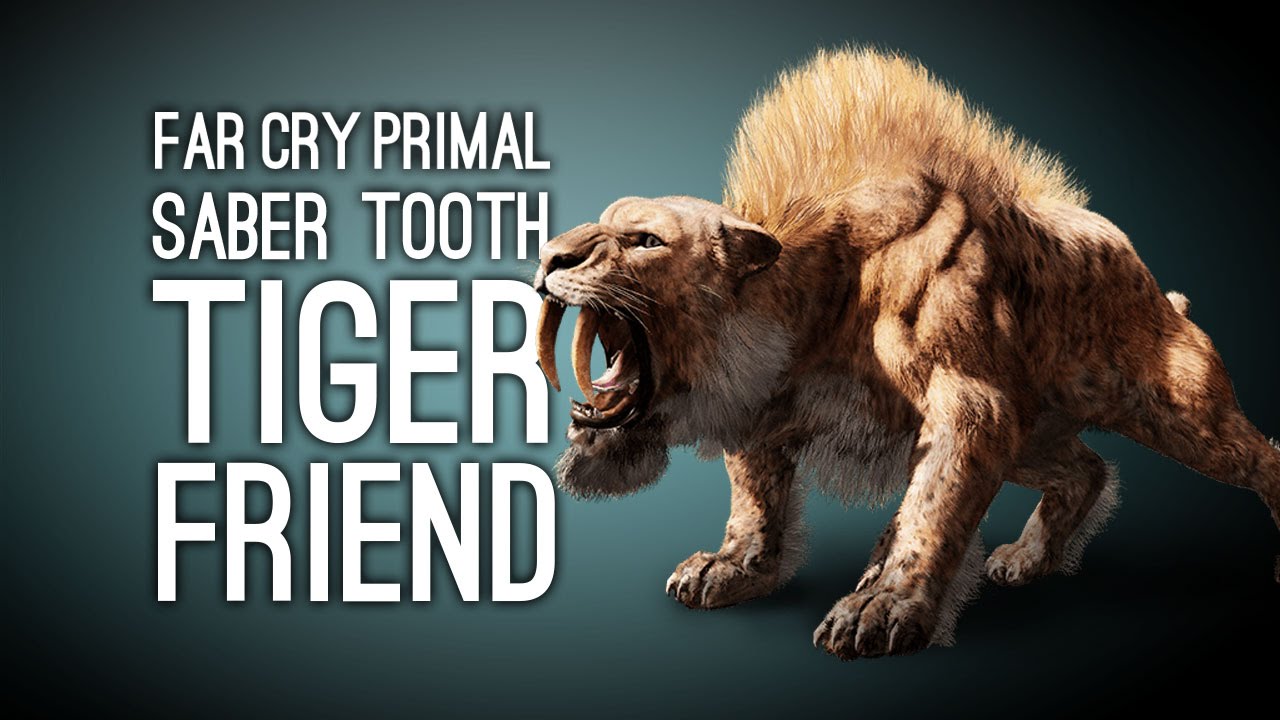 Radio towers have been replaced with bonfires which are now guarded by enemies. It’s a far less awkward method of revealing the map. I liked the towers in previous games, but first person and platforming do not mix, so this was a better alternative in my opinion.

You would think that the loss of guns and vehicles would be detrimental, especially in an open world game, but Primal replaces these with mechanics that I honestly prefer.

The clubs feel weighty and powerful, while the arrows and spears have a nice weight and punch to them when they hit. Other tools like sharp rocks that act as throwing knives and various pouches like bee bombs keep things familiar but fresh.

Instead of vehicles, Takkar uses his abilities to tame wild animals. As you progress through the numerous skill trees, you’ll gain the aid of various animals that proves invaluable for survival and for getting around once you learn how to ride them.

Your owl, for example, can fly over settlements and report back enemy locations to you. With upgrades it can swoop down and kill enemies or drop bombs as well. As you encounter wild animals like wolves, bears, and sabertooth tigers, you can tame them and they will fight by your side.

It feels great to rush into enemies as your trusty companion rips them to shreds. They can get a little aggressive in stealing your kills, but otherwise I couldn’t imagine going back to a Far Cry without them. They make the combat so much more dynamic and fluid. It also helps keep enemies from ganging up on you which drove me nuts in previous titles.

The content is all here. You can easily spend twenty to thirty hours in the world of Far Cry Primal and I’ve enjoyed every minute of it.

A Trip Through Time

Everything about Far Cry Primal feels like a labor of love. The attention to detail in the animals, the massive redwood trees, and the snowy mountains just feels more authentic than ever before. Perhaps it’s the lack of buildings and vehicles, but I found myself getting lost in the natural beauty of Oros.

The game easily looks as good if not better than Far Cry 4. The animation during cutscenes for characters is still top notch and the actors speak the ancient language in a way that makes you feel like they’ve always spoken it. The game may not get all the science right, but it feels authentic nonetheless.

I know everyone won’t agree with me on this, but Far Cry Primal is easily my favorite of the series. It’s a fresh setting and a perfect refinement of the formula, A few of the nagging issues still remain like small glitches or frustrating deaths, but overall this is the most fun I’ve had with the series since I first played the third entry.

Now, if you’ll excuse me, my pet sabertooth tiger and I have some Udam to kill.