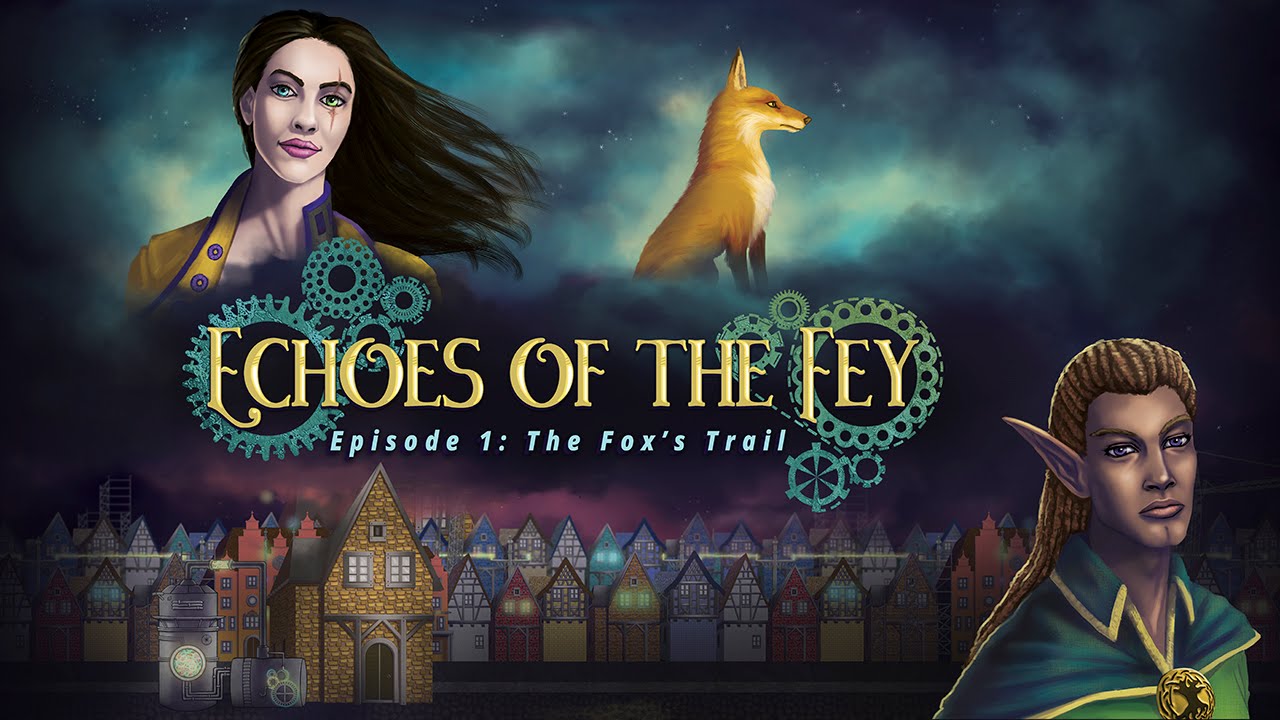 The visual novel genre has enjoyed some excellent entries on the PS4 in recent months, and now we have a new contender: Echoes of the Fey: The Fox’s Trail. In this game, you play as Sofya Rykov, a private detective working in the outskirts of a city set in a high fantasy world where magic is real and tensions are high between humans and Leshin races.

Does this visual novel grab your attention with a compelling mystery, or should we let this one become a cold case? Let’s find out!

An Enigmatic World Paired With an Excellent Main Character

Echoes of the Fey: The Fox’s Trail, throws you right into the world with a little bit of backstory, but otherwise no introduction. It’s a bold first step that, for the most part, works really well. The game isn’t very forthcoming with backstory and instead relegates to parts of conversation with other characters.

For example, you’ll learn about a major event in the Sofya’s past when it comes up several times during conversation with her doctor and partner in crime. There were times when this storytelling style had me confused because I felt like a third wheel in the conversation for a few minutes until I caught up with the conversation.

On the one hand, it’s a really organic way of storytelling, but on the other hand, I’m always a fan of things like codexes or in-game encyclopedias to get me up to speed on the game’s world so I don’t feel like I’m a stranger walking into the room halfway through a conversation.

I do respect the way Echoes of the Fey: The Fox’s Trail goes about telling its story, I just wish I had more access to the lore behind the world, because it’s actually quite interesting. The world itself is a mixture of high fantasy and modern elements. As a private investigator, Sofya should feel out of place in a setting like this, but the two blend together really well.

This is due to the fact that Sofya is a really well-written character who has a lot of charm and wit. She feels like a seasoned investigator, and her no-nonsense attitude during her work is a great contrast to her love of drinking during the off-hours (or whenever she feels like it).

The supporting characters are also interesting, especially Heremon who acts as the voice of reason and Sofya’s personal doctor. Sofya herself also harbors a secret that only she and Heremon know: she has a magical power to transform into a cat at will.

Humans aren’t supposed to have magic like this, but Sofya can also use this ability to investigate areas she otherwise wouldn’t be able to access. As the story progresses, you’ll be given various choices on how you handle situations, which can lead to different events and endings.

As far as visual novels go, it’s one of the most interesting and best written that I’ve personally played. That being said, beyond the method of delivering backstory, I also felt like the story could have moved at a brisker pace.

I stopped to do side missions more often than not, and while they were interesting, they could have been more compelling and would have been more beneficial if they added additional depth to the story beyond exploring some side characters.

As part of her investigation to locate a missing Leshin, Sofya will encounter a lot of interesting characters and find herself faced with some tough decisions. While it could have been a little more brisk on the pacing, the excellent writing, voice acting, and character development are more than enough for me to recommend this one based on story alone.

Let’s explore how the game plays. 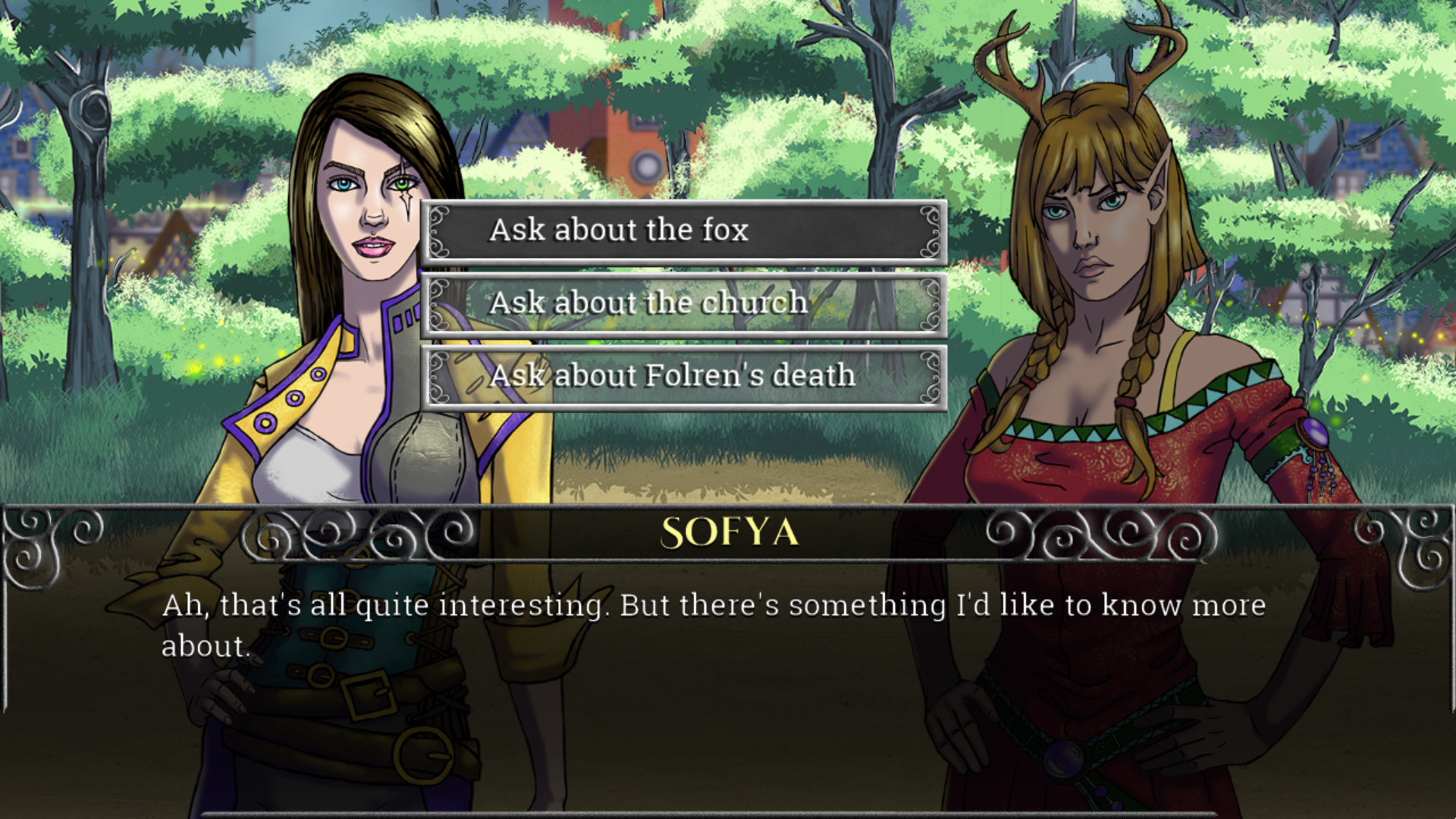 Beyond the start visual novel gameplay, Echoes of the Fey: The Fox’s Trail also offers some side-scrolling exploration as you move from place to place. During these segments, you can also check out some side areas and speak to characters regarding side quests.

You also have access to a map and inventory, but these are purely there to show you information and don’t directly affect the gameplay. You can press the triangle button to switch between human and cat form when entering areas as well.

Beyond these minor exploratory segments, the gameplay consists of clicking through dialogue and making choices when they appear. It all functions perfectly fine, with a nice touch added in the form of exploration and side quests, even if they are simple in their execution. 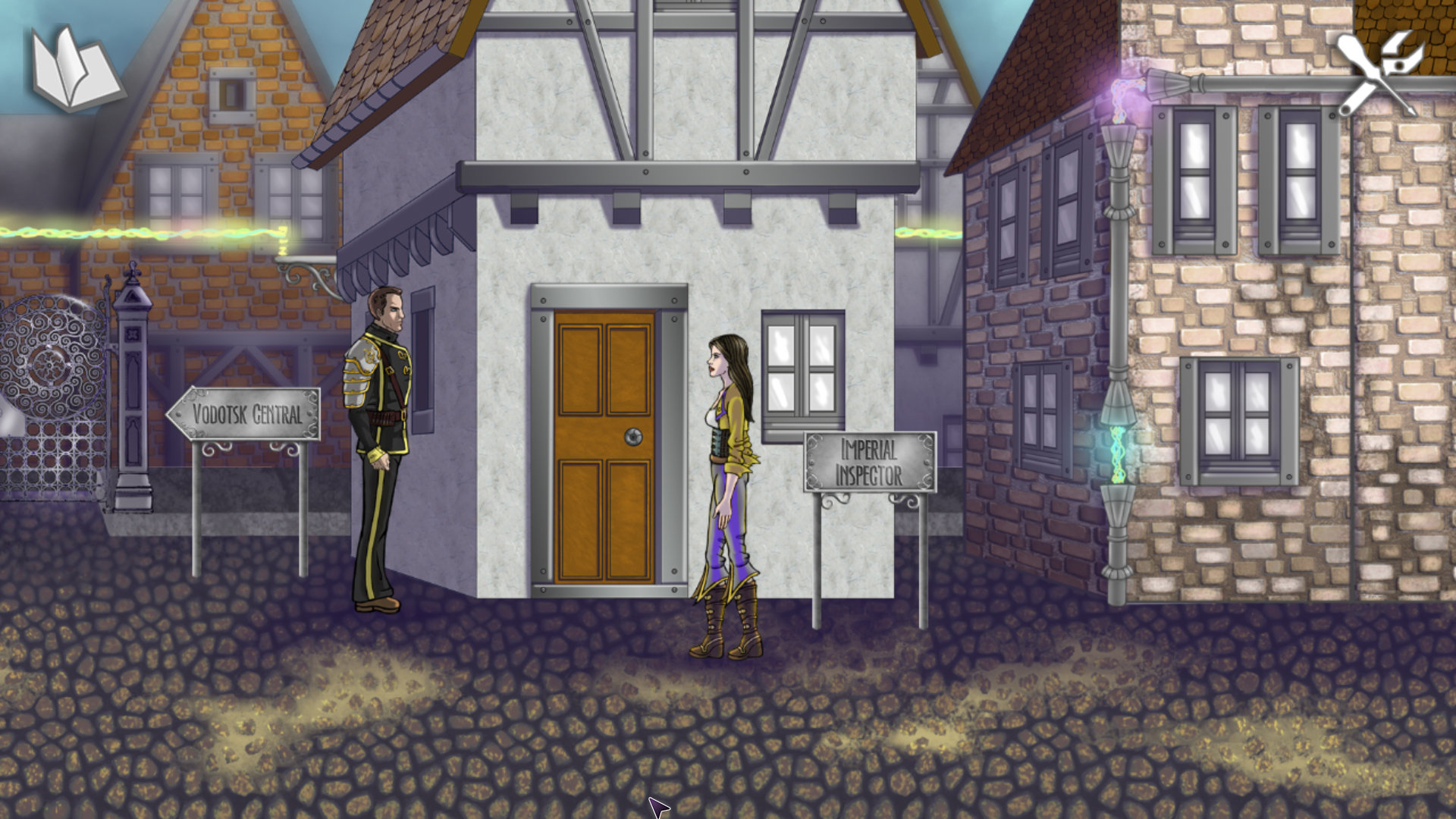 The art style of Echoes of the Fey: The Fox’s Trail, is detailed and expressive. Characters actually have mouth animations as if they are speaking their lines. They also switch poses and change facial expressions during conversation to mimic their current mood.

While not everything is voice acted, the voice acting that is there is great, and again, Sofya herself steals the show. She’s such an immediately likeable character that I connected with her immediately and always loved her sense of humor.

The soundtrack offers a great mixture of synthetic sounds and high fantasy tropes, never intruding or becoming a nuisance while you’re trying to follow along or read. Combine this with text that is nice and large, and color choices that make it easy to read, and you have a polished and comfortable presentation.

My only issue with presentation, is the running animation while exploring, which can look a little awkward. Transitioning from scene to scene while running also triggers a blinding flash of white that wasn’t expected.

These are just minor objections, however. Overall, Echoes of the Fey: The Fox’s Trail is a really solid visual novel with a great price point, excellent writing, and an intriguing world to immerse yourself into.

While this is marked as the first episode, it is a complete story. I highly recommend you pick it up, so we can see more of Sofya’s investigations as soon as possible.

A copy of Echoes of the Fey: The Fox’s Trail was provided to PS4 Experts for review purposes