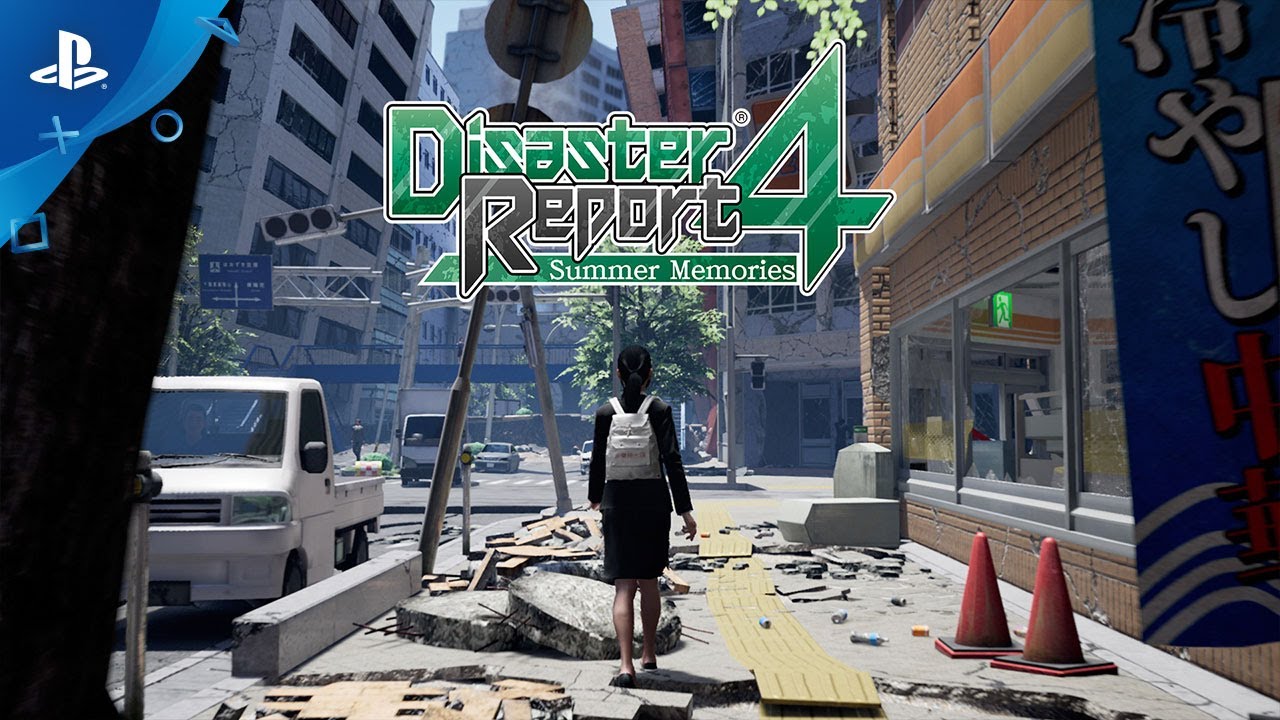 There are games in any console’s library that are referred to as “cult classics” that have acquired a cult following, despite mainstream criticism of their overall quality. For me, these include titles like Earth Defense Force and Deadly Premonition, among others. All it takes is a few minutes with Disaster Report 4: Summer Memories to see that this revived project from 2011 meant originally for the PS3 has some pretty glaring flaws.

As an objective reviewer, that cannot be denied, but I wouldn’t write off this title just yet. It could very well become another one of these cult classics that lives on through the virtue of what makes it unique. Whether or not it achieves that status remains to be seen. In the meantime, let’s see what we have in the here and now.

A Relic of a Bygone Era, But it Has its Charms

My personal experience with the Disaster Report series is limited to the US release on the PS2, which was titled “Raw Danger” here. This was before the deluge of survival games that have now saturated the market, so back then it was a novel concept to try and survive during harsh conditions, or in this case, a natural disaster.

Disaster Report 4: Summer Memories places you in the shoes of a custom character visiting a major city when a massive earthquake strikes. You’re able to choose the gender and overall look of the character, with the ability to change your hairstyle and color later using bathroom mirrors.

Right off the bat, the game illustrates its focus on making decisions. You’ll choose things that define your personality, how to react to a variety of situations, and what to say in conversations throughout the game.
The story of Disaster Report 4: Summer Memories starts out grounded in a tense struggle for survival, but it tends to go off the rails in later chapters. Many other reviews have opted to illustrate this by deliberately discussing spoilers, but as someone who values story regardless of how ridiculous it may be, I’m going to keep things vague.

I’m fine with a bonkers story, especially when it adds to the game’s charm as a flawed, but ultimately interesting game experience. The issue here is that your decisions don’t often have the impact you expect on the world. With a morality system (that’s largely toothless), you may find that what you believe are obviously virtuous decisions are instead punished with negative points.

Choices come at your pretty consistently in Disaster Report 4: Summer Memories, but they vary in their immediacy. You will need to make decisions under pressure, but other times you’ll choose from the same set of first impressions every time you meet with someone.

That being said, I did enjoy some of the more ridiculous options. An example would be a story arc where you have the option to force a businessman to kneel before you after he knocked you down earlier in the level. Seeing this beside other, more reasonable options, gave me chuckle.

Also, while I would normally find translation errors detrimental, I did notice some funny moments where I felt like the English translation missed the mark on the intended meaning of a line. Specifically, there was one moment where a person was lying on the floor, surrounded by blood, most certainly dead, and the game hilariously informed me that he was “out of breath.”

The story is also inconsistent with its pacing. The opening hours offer a mixture of compelling and otherwise pretty boring stories for you to work through. You can talk with just about everyone around you, but only select people will trigger cutscenes and new events for you to work through, so it’s also hard to figure out what you need to do to progress the story.

Since the environments are fairly large, this can lead to confusion as you run around looking for a trigger that will start the next step in your journey. Map markers do show things you’ve discovered, but not where to go next. Some guidance here would have helped with the pacing since there’s very little to do outside progression.

There are items to find that include things like custom compass designs for your HUD, clothing, and storage options. These give you the chance to customize your character’s look beyond their standard business attire.

Given the nature of the game’s premise, I expected survival elements to play a fairly large role, but things like hunger, thirst, stress, and the need to use the restroom are relegated to the pause menu and rarely become an issue if you remember to check them.

This seems like a missed opportunity, as it would have offered a way to add tension and a reason to explore the otherwise empty environments. Speaking of environments, one thing I really enjoyed about Disaster Report 4: Summer Memories was the unexpected nature of the earthquake’s aftershocks.

Fairly often, the world will shake all around you, resulting in collapsing buildings, highways, and rooftops. It’s harrowing when it happens, and you’ll need to get out harm's way or brace yourself to avoid taking damage.

I can imagine some cheap deaths here, but for the most part I thought this added a nice element of surprise to the game as you never quite knew when another aftershock would hit. These moments do tend to tank the frame rate, however, so your luck in choosing a safe position does play a role.

Disaster Report 4: Summer Memories also has a VR mode for PSVR that unlocks stages as you complete them. These are structured experiences where you move across specific nodes and look for pieces of the game’s logo to unlock things in the main game.

Smooth locomotion is used as you travel from node-to-node, but your position is fixed on these spots, so you can’t freely explore. Graphically, things up close look decent, but anything a few feet away is quite blurry and visibly comes into focus as you move.

Some of the set piece moments, like buildings collapsing, are harrowing in VR, but other than that, this mode doesn’t feel essential.

Really, the overall feeling I took from Disaster Report 4: Summer Memories is that it missed the opportunity to really capitalize on its premise. Whacky story aside, a combination of true player agency and survival mechanics in this setting could have really been a home run. Instead, this feels like the beginning of a great idea that never got the time or technology it needed to truly execute on the premise. 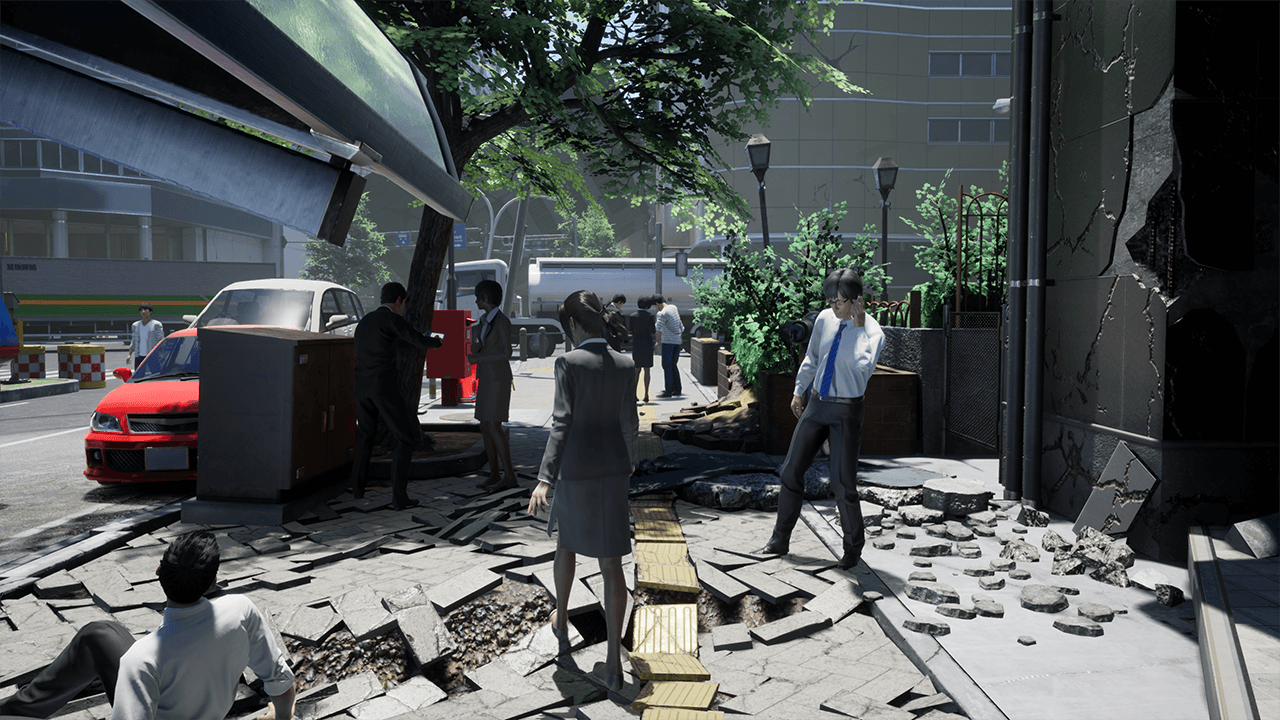 Disaster Report 4: Summer Memories feels like a PS3 game in all the wrong ways from a presentation standpoint. Japanese voiceover with English subs is the only option (which doesn’t bother me at all, but is worth noting), the graphics are very dated in almost every way, and the performance buckles during larger moments that highlight the game’s few strengths.

Despite everything, I didn’t hate my time with Disaster Report 4: Summer Memories. While it falls short of its premise and doesn’t justify its $60 price tag very well, it has the hallmarks of a cult classic, if only for its historical value as a glimpse of where the series could have gone.

There’s not anything else quite like it, and while that’s not enough to elevate it above its fundamental flaws, this is still the kind of game that offers potential to become an interesting piece of gaming history with a dedicated fan base that looks past the flaws and embraces what could have been.

A copy of Disaster Report 4: Summer Memories was provided to PS4 Experts for review purposes.