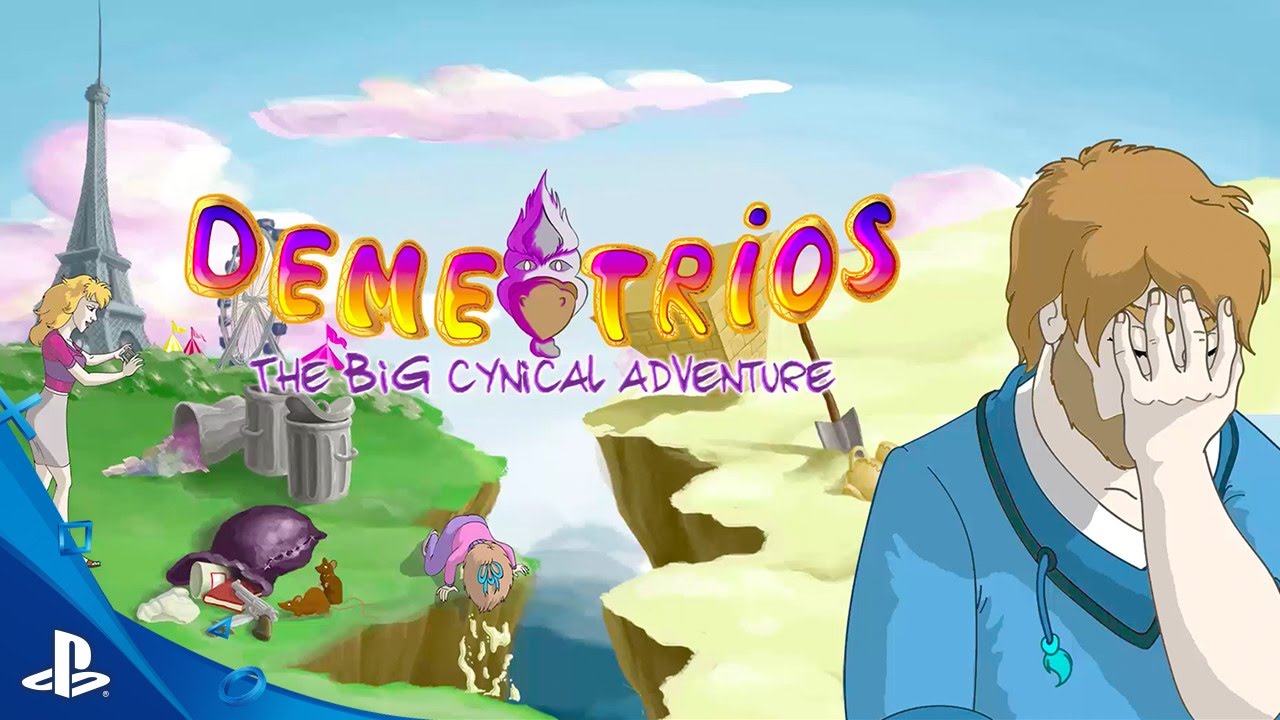 Point-and-click adventures were my bread and butter growing up. I had an old PC when I was a kid, and I couldn’t get enough of the genre. Between the great stories, clever puzzles, and simple gameplay, it was something that drew me in. To this day, I still love a good point-and-click adventure, especially one with a healthy dose of comedy.

Demetrios - The BIG Cynical Adventure is here to scratch that itch. Comedy is subjective though, so does this game plaster a permanent grin on your face, or does it fall on the wrong side of the comedy line? Let’s find out!

An Average Guy in a Not so Average Adventure

In Demetrios, you play as Bjorn Thonen. He’s an antique dealer in Paris, which would make you think he’s a pretty upstanding guy. Nope, Bjorn’s “antiques” are random trinkets that he passes off as valuable merchandise. His apartment is a mess, and his lifestyle would make most people shake their heads and silently judge him.

In other words, he’s the opposite of your average point-and-click protagonist. He has no place being front and center in a game like this, and yet, that’s the premise. While some people will probably hate Bjorn as a character, I thought it was fun to play as someone who just really doesn’t have a censor or a care in the world.

When the game starts, it gives you the option to pass on toilet humor if you prefer your humor to be a little high brow. Regardless of how what you choose, Bjorn is a fan of low-hanging fruit. Now, to some people that may be a bad thing. I have a pretty flexible sense of humor, so it didn’t bother me. Your mileage may vary here.

As with any kind of humor, you run the risk of offending people, and while I do agree that there’s a line, Demetrios did a good job of staying on the right side of it for me. Whether it was Bjorn’s internal dialogue or the whacky characters I came across, I found myself chuckling more often than not.

Humor preferences aside, Demetrios begins as Bjorn’s apartment is robbed and he’s knocked unconscious. With a potentially valuable item missing, and Bjorn’s pride at stake, he sets out to find the culprit. As the story goes on, Bjorn, his neighbor, and her daughter find themselves in increasingly ridiculous situations.

The story can be a little slow at times, with some inconsistent pacing, but overall I liked the sense of mystery and the carefree approach that Bjorn took to each situation. There’s also a really funny game over mechanic. In fact, Game Overs are a collectible in the main menu. There are a lot of ridiculous ways for Bjorn to make a very bad decision and either kill himself, trap himself, or get himself arrested.

The game over screen always has a hilarious description of what happened as well. These game overs just warp you back to the place where you made the decision. They’re not meant to punish you for a bad decision, more to encourage you to try it and earn the collectible ending.

As with any kind of humor, Demetrios - The BIG Cynical Adventure won’t be for everyone. If you consider your sense of humor to be flexible like mine, you’ll probably get plenty of laughs out of this one.

Demetrios has a typical point-and-click control scheme. I did enjoy the fact that you can zoom in and move the cursor with more precision, though. This made clicking on specific objects much easier than it would normally be with a controller setup.

With a press of the square button, you can also highlight every clickable object on the screen, which is another great feature that avoids pixel-hunting. The puzzles in Demetrios range from sensible, to ridiculous, and even absurd. Some work than others, with solutions that follow a clear logic, and others that seem like they just want to you spend a little more time on it.

The frequency of fetch quests is a little high as well. Even Bjorn jokes about this when he’s given yet another task to go and find specific ingredients for someone. One thing I did really enjoy about the point-and-click gameplay, was the hidden object element.

Specifically, Bjorn can find 3 cookies in every single screen if the game. These cookies are really fun to find, and often have some hilarious or gross locations that accompany them. At any time, if you’re stuck, you can force Bjorn to eat one of the cookies and get a hint.

It’s great for people who don’t like getting stuck in a rut with these types of games. Others may scoff at the existence of a hint system, but I liked having the option personally. While there are the aforementioned fetch quests, Demetrios also throws in different types of puzzles as minigames as well.

This is where the game really comes into its own. Whether it’s playing hide-and-seek with the neighbor’s daughter, flavoring an ice cream cone with a personal hygiene product, or playing carnival games, Demetrios wins big when it does its own thing, but unfortunately it relies a little too much on traditional fetch quests for my liking.

Despite this, the humor and the overall insanity of the gameplay was more than enough to keep me playing. I had to see what was going to happen next. At the very least, I needed more cookies. 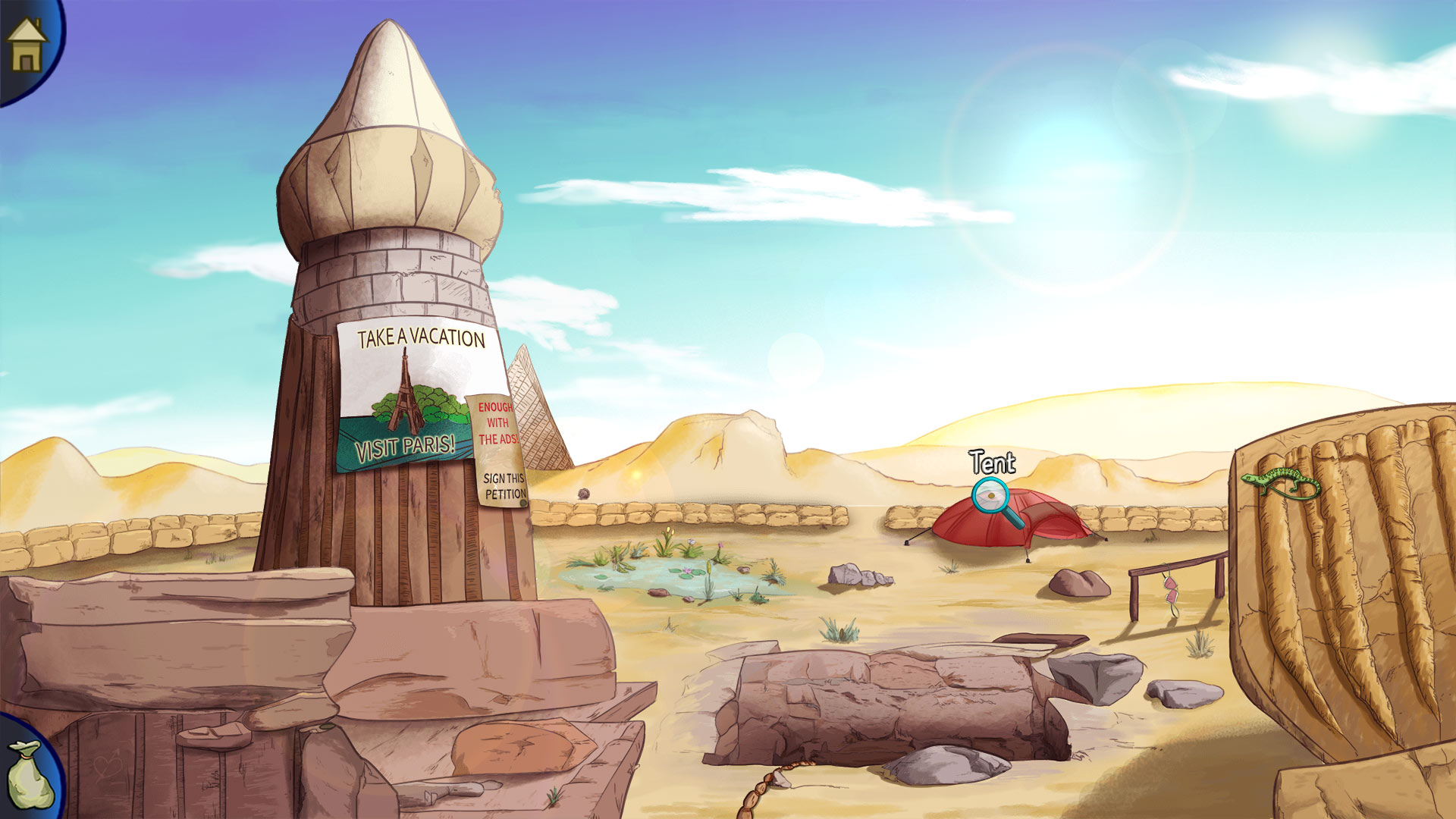 Demetrios uses a colorful hand-drawn style that combines both form and function. The excellent color palette is pleasing to the eye. At the same time, there’s enough detail to each screen that the puzzles and cookie hunting go smoothly.

Even when using the zoomed-in camera to hunt for cookies, the graphics retain their sharp resolution. Major cutscenes play out like animated comic panels, which have enough movement to stand out from the standard gameplay.

During conversations, character models change poses and do subtle things like move their lips or blink during downtime. It’s a nice touch that makes them feel alive. While I would have really appreciated voice acting to drive some of the jokes home, the standard text was still written well enough to make me laugh out loud on more than a few occasions.

When I finished playing Demetrios, I realized that this is one of those games people will love or hate based on their style of humor. Beyond this possible division, everything else about the game is well executed, even if the gameplay can be repetitive at times.

It does have a filter option for the toilet humor, but you should still expect some crass comedy regardless. If you’re looking for a good comedy adventure, and you have a flexible sense of humor, Demetrios: The Big Cynical Adventure is a perfect fit for you.

A copy of Demetrios: The Big Cynical Adventure was provided to PS4 Experts for review purposes