When it comes to JRPGs, there’s no shortage of choices on the PS4, which is why it’s incredibly important that they stand out. Beyond sheer quality, you also have to be wary of games that focus more on fan service that actual gameplay, resulting in shallow experiences.

Among the vast sea of choices, Death end re:Quest manages to immediately stand out with its combination of RPG mechanics and visual novel elements. It’s certainly a child of two worlds, but is this a game you want to sink dozens of hours into? Having done exactly that, it’s time to find out.

A Surprisingly Compatible Mash-up of Genres

Death end Re:Quest has a framework that may feel similar to fans of anime and JRPGs, but it quickly does a lot to differentiate itself. The two main characters are Shina Ninomiya and Arata Mizunashi, but they are joined by plenty of others as time goes on.

Both Shina and Arata were game developers in the real world, working on an immersive MMORPG called World’s Odyssey. Unfortunately, the game was shut down and Shina herself has been missing for over a year.

Well, come to find out, she’s trapped in the game. Not only that, but her memories have somehow been altered to make her think she belongs here, while her body exists somewhere in the real world.

The opening of the game can drag a little, but once you get into the groove of things, Death end re:Quest does a great job of keeping the stakes high while always pushing you towards new and intriguing mysteries.

In terms of story, much of it is delivered in static visual novel cutscenes, but these span between both the game and the real world. Shortly into the game, you can switch freely between these two sides of the game and explore modern the world as Arata as he tries to uncover the mystery behind Shina’s disappearance and how several other strange events are somehow connected to World’s Odyssey.

The stakes, both in-game and outside it, are much higher than you would expect, which helps to distance Death end re:Quest from other similar storylines. It’s also worth noting that this game doesn’t hold back the gory details. As you make decisions, you can often find yourself reading about your gruesome demise, complete with descriptions of shattered bones, eviscerated organs, and much more.

Borrowing from others in the visual novel genre, the game allows you to use a timeline to jump around events and experience alternate outcomes. You can also save at almost any time during text scenes, so I used this liberally to reload if I hit a game over.

The writing can certainly drag on at times during the heavy story expositions, but the overall feel and pacing of the novel segments was quite good in my opinion. There’s enough animation in the character portraits to keep you engaged, and the descriptions are quite disturbing when they want to be.

I particularly enjoyed Arata’s segments in the real world as he dove deeper and deeper into the rabbit hole. The game certainly had me guessing throughout, and the leaps back into World’s Odyssey to continue Shina’s story kept things from feeling stale.

This brings me to the RPG elements. Combat is triggered by interacting with enemies that roam dungeons, and while it’s turn-based, it offers some freedom and interesting ways to dispatch your enemies. You can move freely during your turn and set up attacks in sets of three.

You can simply queue up three attacks, or try combinations to potentially unlock new abilities. In either case, ending a combo with an attack sends the enemy flying across the battlefield. If they hit the boundary, they take additional damage and bounce off. This also applies if they hit other enemies.

When they ricochet back into your or an ally, a sleek animation shows you getting in another hit as you send them once again into a pinball game of death. Lining up shots and watching enemies bounce around the area never gets old and really added a nice layer of strategy to the battles.

Glitches also play a big role in the combat, represented by glowing pads on the ground. Running through these will damage you slightly but also raise your corruption percentage. When this hits 80%, you can trigger glitch mode.

It’s here that Death end re:Quest inserts some fan service, as characters transform into a superpowered version of themselves that somehow leaves them mostly naked (with only a few pieces of the body still covered). While it’s a little uncomfortable given their young appearance, the glitch attacks you unlock are quite spectacular in their scope.

Another element is Arata in the real world, who can hack the game when you lower the corruption level by sending enemies through the glitches to break them. These hacks offer bonuses or even the ability to change the genre of the game into something like a shooter for a short amount of time.

With the option to play on several difficulties, Death end re:Quest welcomes both hardcore RPG players and visual novel fans alike, which I really enjoyed. While the pacing can be uneven, and the dungeons a little uninspired, the world and mash-up of different mechanics really made Death end re:Quest stand out for me in an otherwise saturated market.

A Combination of Tropes and Unique Designs 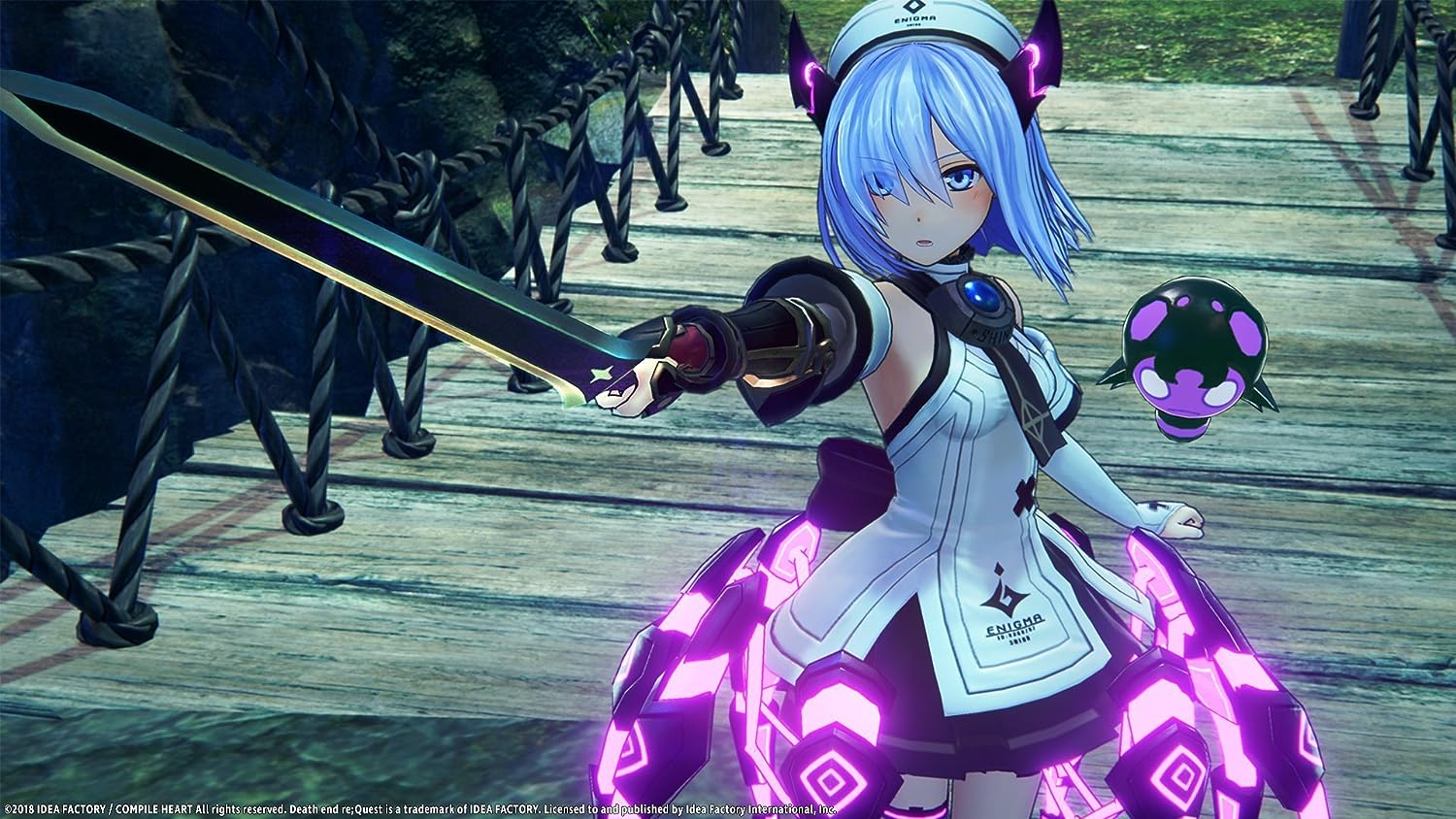 The presentation in Death end re:Quest combines fairly standard environments with detailed characters and wonderful portraits for the visual novel segments. While it does tend to fall into stereotypes (some of which are hilariously meta), the overall package paints a unique and detailed world to explore.

While there’s no shortage of RPGs between the PS4 and the ones offered on PlayStation Now, I’ve never played anything quite like Death end re:Quest. For fans of JRPGS, visual novels, or both, it’s most certainly worth a look.

A copy of Death end re:Quest was provided to PS4 Experts for review purposes