The original De Blob was a breath of fresh air when it first released. A few months ago, we were treated to an HD remaster on the PS4, and now the sequel has gotten the same treatment! If you were a fan of the first game, will you enjoy De Blob 2?

Join us as we dive into the color revolution and find out if you should consider enlisting to fight against Comrade Black.

Bringing Color to The Masses

The first De Blob was a fun platformer with an arcade feel. In it, you fought back against the INKT Corporation to restore color back to Chroma City. In De Blob 2, Comrade Black is back and trying to set up a new base of operations in Prisma City.

With color being drained from the world, it’s up to Blob and he friends to once again save the world from the totalitarian drudgery of Comrade Black and the INKT Corporation. While I enjoyed the first De Blob, I found myself immediately more engaged with the second entry.

For one, the cutscenes in this remaster look a bit better, probably because they are coming from a newer release. The more linear approach also improves the pacing for me and added variety to the objectives. In the original De Blob, the freeform arcade point thresholds quickly wore thin for me.

De Blob 2 also leans more heavily into its subtle political references. It manages to touch upon very heavy topics with a light touch and a splash of humor. For younger players, this will probably go over their head, but for players like myself it adds a touch of complex humor that I appreciated.

This is all balanced with a funky soundtrack and bright visuals that focus on the contrast between color and black and white. The overall structure and storytelling is already improved in this sequel remaster. Let’s find out if the gameplay smoothed out some of the rough edges.

A Simple Remaster, but An Improved Sequel 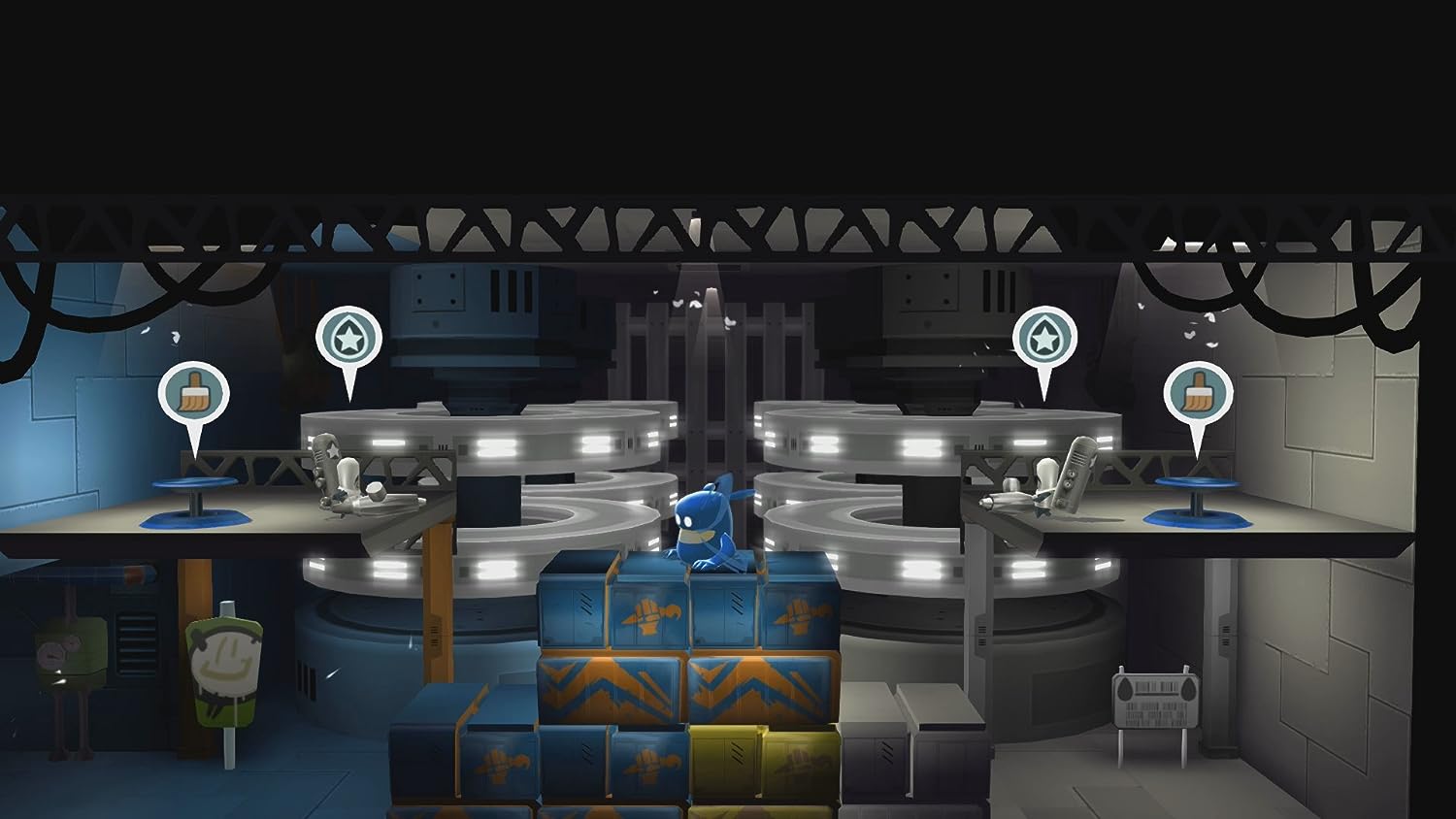 The levels are far more distinct and unique in the sequel as well. I always felt like the areas in the first game were a little bland, but this thought never crossed my mind in De Blob 2. Despite the tighter pacing and linear approach, though, the levels are still incredibly long.

In the first De Blob, this drove me insane because I would have to either finish the level in one sitting or start from the beginning. De Blob 2 adds checkpoints, so this problem is not as prevalent, but the checkpoints are still very spread out.

Consider the amount of time it takes to finish a level, to say nothing of the collectibles and completionist goals, it’s really a shame there wasn’t a better save system in place for people who want to play in quick bursts.

During the levels, you’ll be tasked with various challenges that you’ll need to complete to progress. These typically involve objectives centered around bringing color back to the landscape.

As Blob touches pools of color, he immediately absorbs that color in the form of paint points. With the L2 button, you can also quickly absorb the maximum number of points. As you jump and splash across buildings, trees, objects, and even people, you’ll impart your color onto them.

This core mechanic is just as fun as it was in the first game. In fact, it’s even more enjoyable thanks for more responsive controls and tighter platforming. A few problems have carried over, however.

Combat, for example, still uses a finicky targeting system that can lock on to the wrong enemy for certain situations. Since combat isn’t very prevalent, it’s not a huge issue, but I would have liked to see an improved combat mechanic in this sequel.

New 2D segments make their debut in De Blob 2, and while these could have used more challenging encounters, I enjoyed how they broke up the gameplay into new puzzle and combat-focused segments.

Overall, I prefer the linear feel of De Blob 2, but I know some people will say that liked the arcade structure of the first game better. I would agree, if the first game had better controls and checkpoints, but it did not.

Blob Party mode does make a return, where you can cooperatively work together to paint buildings and restore color to environments. Again, a nice touch, but full co-op would have been best. This sequel also features a simple co-op option that lets a second player jump in as an assistant of sorts. It’s not a fully cooperative mode, but it’s welcome regardless.

For those reasons, I would recommend De Blob 2 over the original. Let’s see how the remaster handles the new visuals.

A Sharp Way to Play a Classic Platformer 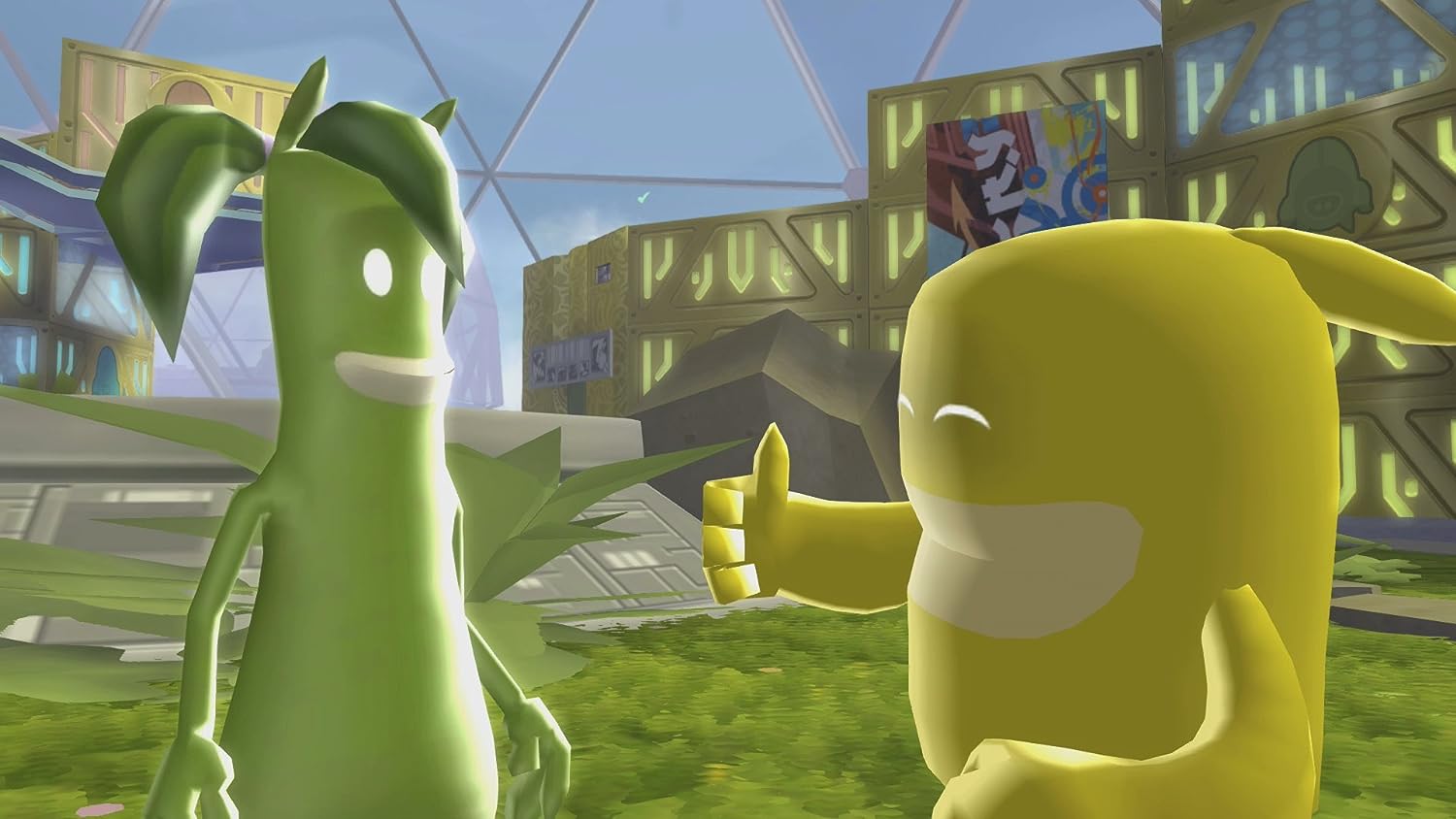 De Blob 2 is by no means perfect, but it is still one of the most unique platformers out there. While this remaster doesn’t do much more than bring the game into the modern era of resolution, the enhanced visuals do illustrate the timeless nature of the visuals.

Just like the first game, De Blob 2 also has an amazing soundtrack that adapts to the way you play. As you splash color on buildings, various instruments will play riffs that move along with your painting.

Red, for example, triggers a smooth saxophone track every time you paint a building. The combination of color and sound makes for a really unique and relaxing experience. It may not be the perfect platformer, but anyone who missed out on this release originally should give De Blob 2 a shot.

A copy of De Blob 2 was provided to PS4 Experts for review purposes. Played and reviewed using a PS4 Pro