When I think back to the days of classic arcade racing games, there's a big place in my gamer heart for the Burnout series. When I heard that Three Fields Entertainment, started by Burnout veterans, was working on a new driving game that brought back the classic "crash mode" formula, I was stoked.

Now that Danger Zone is here for the PS4, we have a modern take on the classic mode where you cause massive pileups using nothing but your car and a few power-ups. Does this game offer a powerful adrenaline rush, or does it crash and burn? Time to find out!

The Premise? Create the Biggest Crash

The concept behind Danger Zone is simple, but it's a classic setup. You have a single, fairly small car, and you're thrown into a series of scenarios where you must drive in, collect some bonuses and power-ups, and then do the most damage you possibly can.

This is Danger Zone in a nutshell. It doesn't have any racing modes or any alternate methods of play. Beyond the concept of starting a massive crash, you can also pick up bonuses and additional Smashbreakers, which we'll discuss momentarily.

Once you've hit your first major collision, the controls are wrenched away from you, and you must watch the chaos play out. Different vehicles have different values, and knocking over payloads on large trucks adds additional damage to your total.

Fans of classic Burnout will know all of this very well. Danger Zone does make things a little more difficult by disqualifying you if you fall off the level, so the goal is crash, but not fall off, even if your car is hit again during the chaos.

Combine this with some seriously high goals for gold medals, and there's a lot of reason to replay Danger Zone's levels, if only to get your score as high as possible. Leaderboards are, of course, also provided.

Now that you know the premise, let's talk about the details underneath Danger Zone's hood.

Smashbreakers and Strategy: The Foundation of a Massive Pileup

Your first experience with a level in Danger Zone is usually one where you're just trying to get the lay of the land. The developers at Three Fields Entertainment are excellent level designers, and this comes through in the intricacy of the levels.

One level will offer three different intersections for you to target, while another will send you flying through the air and onto a busy highway. Your first run, or even your first five runs on any given level probably won't give you all the potential strategies you can use.

For example, after numerous attempts at getting the gold in one level, I noticed during a crash sequence that there was a platform beneath the main road, loaded with parked trucks. It was a gold mine, and it was hiding just beneath the main attraction.

In a game where I never wanted to go over the edge, I suddenly discovered that I could, given there was something to land on beneath. I also incorporated the bonuses into my strategy, as these add cold hard cash to your final score.

This brings me to the Smashbreaker, which is the secret weapon in a true Danger Zone player's arsenal. You get one of these for free after a certain number of wrecks, but you can get several more if you collect the power-ups before the crash begins.

Triggering a Smashbreaker causes your car to explode into the air. During this time, you can control yourself with the left stick and steer into other vehicles to cause more carnage. You can also use multiple Smashbreakers to propel yourself into another area of the level and start a second chain reaction.

It's a smart mechanic that gives you more control over the situation and allows for deeper strategies when you're trying to maximize your damage.

When the crash is complete, you can see a quick flyby of the area before your score is calculated. There's a good amount of levels in Danger Zone, but not a ton. They are meant to be played multiple times.

The later levels especially become some serious challenges to even get a bronze medal on, and you need that to unlock the next level. While there's no multiplayer to speak of, comparing scores between runs makes for a fun time with friends.

When it comes to gameplay, Danger Zone has a really strong concept and it's executed very well. The difficulty can spike pretty quickly, and the choice of only one car hampers the variety a bit. Furthermore, it's very easy to spin out if you try to turn to hard, which can be frustrating.

None of this ruins the core mechanic, however. Danger Zone's premise and overall gameplay beg you to try one more run, just to see if you can get a bigger crash than before, and that alone brought a smile to my face as I recalled my hours of fun with the similar crash mode in the Burnout series.

A Single Theme Across All Levels 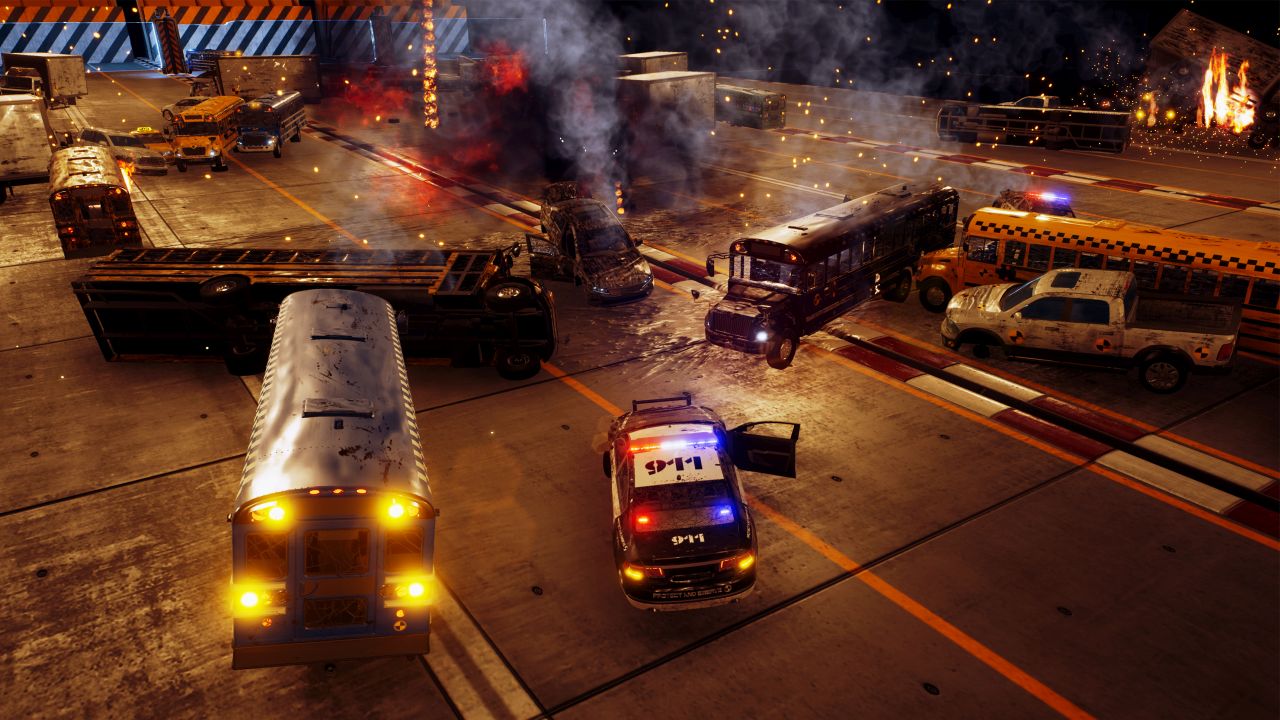 Danger Zone has a single theme to the look and feel of its levels. The game's environments seem to be underground concrete bunkers where roads run through vast spaces lit by industrial orange lighting.

Even your car looks like a crash dummy vehicle. When you fall and get disqualified, you pass through a digital field and disintegrate into blue light, making the entire thing feel like some sort of computer simulation.

The computer sim approach with the underground bunker aesthetic are pretty unique, but since all of the levels have the same visual theme, it can be repetitive. Even the option to choose from more than one car would have been beneficial.

When you boil it all down, Danger Zone is an excellent rendition of the classic crash mode concept. While it's content and feel would be welcome within a larger racing game, the price point and the excellent level design make this one a great option if you're looking for something to scratch that itch for crashes, explosions, and carnage.