The delivery gameplay loop is one that has found new life in a few different games this generation. From the post-apocalyptic USPS simulator that was Death Stranding, to the taxi driving of Neo Cab, we’ve spent more than a few hours in the last several years taking people and things where the need to go.

Cloudpunk continues this trend, asking you to deliver packages for a slightly shady service that explicitly tells you not to open them or ask any questions. Should be perfectly smooth, right? Let’s find out!

A Premise That Leaves a Lot of Potential on The Table

In Cloudpunk, you play as Rania, a delivery driver working in the cyberpunk metropolis of Nivalis. Your employer, Cloudpunk, pays fairly well, but they’re not strictly speaking legal in terms of their clientele and business activities. Of course, as someone who is drowning and debt and can barely afford their rent, Rania doesn’t worry too much about that, at least, not at first.

The story in Cloudpunk is delivered via dialogue as you’re driving between locations, and through conversations with NPCs you encounter when you park and leave your vehicle. While some of the voice acting is a little stiff, I thought the performances overall were mostly solid. The gruff voice of your contact at Control, for example, fit well within the world. Camus, on the other hand, who is supposed to be the digitized version of Rania’s dog, has a predictably simple and stiff delivery.

There’s room for improvement in all of the performances, but the existence of voice acting was a nice surprise as I expected to be reading more than listening. The pacing of the story could have been better, as much of the dialogue tends to happen at the beginning or end of a trip in your hovering vehicle, leaving much of your drives to be filled with the game’s admittedly awesome music, or the ambient sounds of the city.
It would have been nice for the story to happen more consistently during the drives, but I never felt bored as the city itself was quite gorgeous to look at as I was flying down the various highways and weaving between buildings.

As it progresses, the story of Cloudpunk tends to have moments of intrigue and excitement that are balanced by more standard deliveries without much fanfare. My favorite element was something that happened early on where you could decide between two places to bring the package, based on limited knowledge of what it contained.

This is used again, but never to the degree that I would have liked. The consequences of your choice are certainly made known, but don’t have the ripple effect they could have on other aspects of the game or story.

The overarching plot is so inconsistent that I often found more interest in the miniature stories of each delivery, which again, had mixed levels of excitement for me. For this reason, Cloudpunk was best played in bursts for me as it struggled to keep me fully engaged for long periods of time, due to the ebb and flow of the story.

This was compounded somewhat by the gameplay, which seems to offer depth beyond your typical deliveries, but rarely succeeds in delivering upon your excursions. There are no shortage of things to find and collect on your map, along with vehicle modifications, gas stations, and merchants of all types, but it’s not immediately clear why any of it really matters.

The vehicle mods and the gas stations are obvious, but something like punch cards you can find on the ground don’t become useful until later and even then, it’s nothing revelatory. It almost feels like Cloudpunk wanted to be a bigger and more in-depth game than it actually is in practice.

The litany of optional distractions and things to pick up would also be more enticing if you could land your ship anywhere, or at least in more places. Far too many times I found myself right above my objective, only to spend a huge amount of time trying to find a parking spot nearby and then hiking my way to the objective through the walkways.

This wouldn’t be a huge issue, except these long walks were often silent, and could have been a good place to inject more dialogue or exposition. I had a great time losing myself in the visual identity of Nivalis, but what I didn’t like was constantly getting lost trying to find a parking spot. 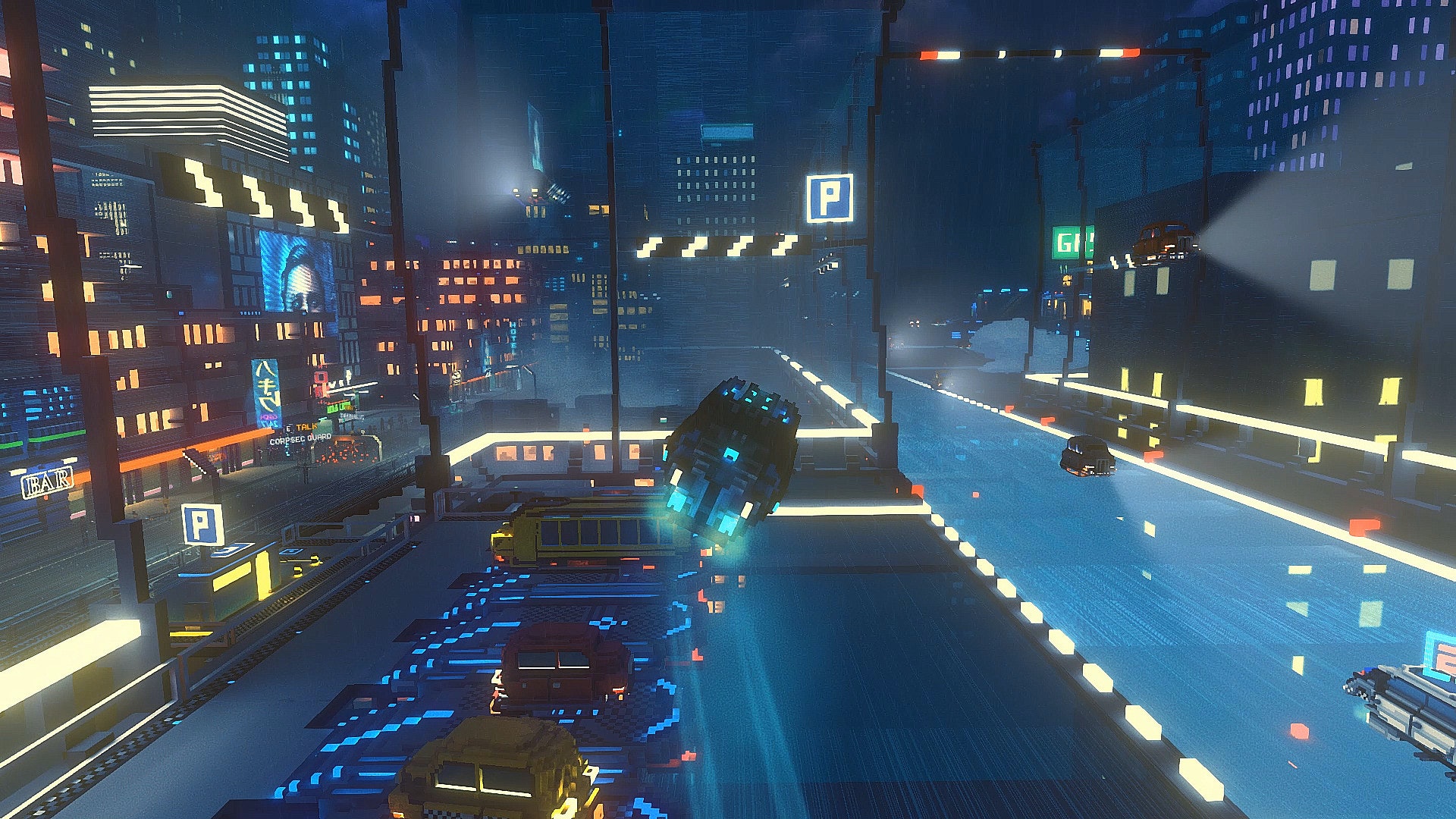 Despite gameplay that wildly swings from exciting to slightly mundane, the actual visual and audio identify of Nivalis is a treat for the senses, and makes up for a large part of the other shortcomings for me. Flying down the highways, meandering between cyberpunk skyscrapers, and even wandering the neon streets of the city under towering billboards made me feel like I was in a Minecraft magnum opus.

In fact, the voxel (block)-based graphics aren’t really apparent until you get up close or walk past one of the NPCs on foot. From a distance, Nivalis simply looks like a bustling city in the clouds, a diorama that begs you to explore its finer details.

Pair this with a wonderful synthwave soundtrack and surprisingly robust ambient audio, and you have a game that works incredibly well as an exploration experience, but fails to truly capitalize on its setting to deliver a consistently entertaining and enrapturing story. Despite this, those who love the aesthetic and don’t mind a few flaws in gameplay or story can easily lose themselves in the sights and sounds of Novalis as a delivery person for Cloudpunk.

A copy of Cloudpunk was provided to PS4 Experts for review purposes.