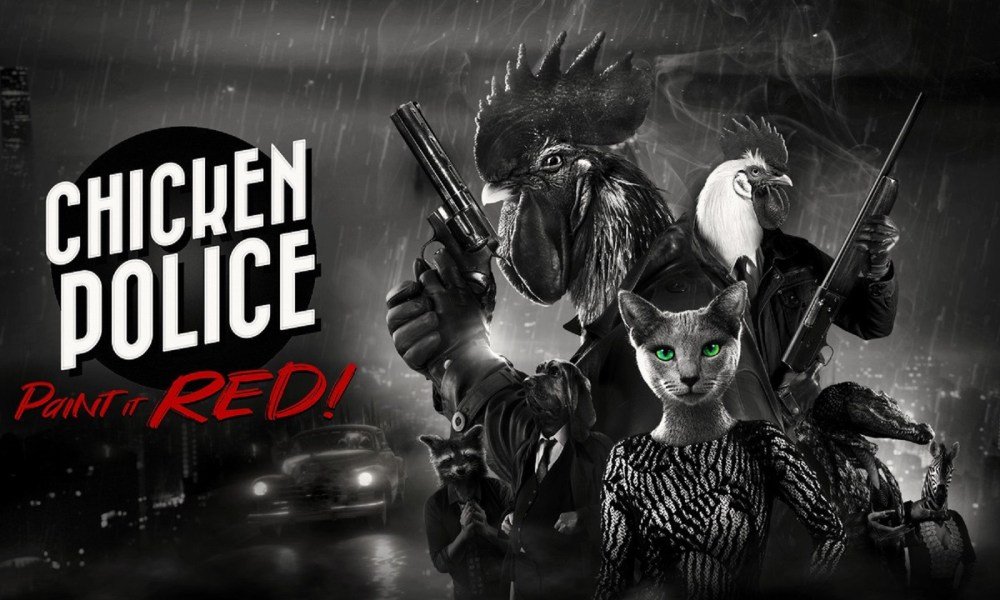 The noir style of crime mystery is one that works incredibly well when it’s done right. The gravelly narration, the black and white color scale, the occasional pop of color, and the allure of it all. It’s easy to get swept up in everything. Of course, these days you need to go beyond a pulpy mystery to turn heads, so why not turn your entire cast into animals?

Chicken Police - Paint It RED! is a new point-and-click mystery adventure for PS4 that employs a slick noir style, but casts an entire set of humanoid animals with realistic heads on mostly human bodies. It’s a bold style, but does it pay off? Let’s find out!

A Capable Noir Crime Story With a Memorable Cast

Chicken Police - Paint It RED! doesn’t utilize its unique style and animal cast for jokes, though there is plenty of humor to be found in the main character dropping an f-bomb one minute and then censoring himself with “clucking” the next.

Like any good noir mystery, the game nails the style from the very beginning. The mixture of photo realistic animal heads on the character’s bodies, sharp backdrops, and the atmosphere of smoke and cheap bourbon all combine to make this feel like a Frank Miller fever dream in the best way possible.

The voice acting is commendable as well, especially our main character, Sonny, who employs a classic sounding style of narration that is both well-paced and suitably cynical. His low, gravelly delivery almost makes you forget at times that the entirety of dialogue is coming from a chicken.

The story starts out a little slow, with your classic office setting, a woman in distress, and a mystery that points to the darkest corners of the city. It took me a little while to really get invested in the story, but by the second chapter both the events and the mystery had begun to branch out into new and interesting territory. It also helped that the cast of characters quickly grows beyond your archetypal noir fare. I especially enjoyed my conversation with a crocodile woman that owns a local brothel and has a long history shrouded in mystery. It’s moments like these that really differentiate Chicken Police - Paint It RED! from the rest of the point-and-clicks out there, and even the other noir offerings we’ve seen this generation.

Strong characters, a compelling mystery, and an abundance of voiced dialogue all combine to really set the stage for an enjoyable, if short, mystery adventure. There are also optional locations and dialogue you can explore to pad out the length.

Turning our attention to the gameplay, Chicken Police - Paint It RED! combines standard point-and-click adventure gameplay with several detective mechanics to keep you on your toes throughout. The first you’ll encounter is a questioning system that feels similar to L.A. Noire, but this one gives you a little more support in the form of Sonny’s notes on the person you’re talking to, and where you should direct your focus.

For example, he may say that a character is scared, and you should play into their fear. This would inform the proper line of question from the options you’re given. Each one adds or subtracts your detective points, culminating in a possible 5-star score. It’s not easy either. I found myself getting 5-stars for a while, only to get tripped up and get 3-stars several conversations later.

The other detective element lets you piece together clues and draw conclusions at your office. This is a little more forgiving as it lets you try until you get things right, but it’s engaging nonetheless as you’re forced to figure out how the clues fit together.

I would have liked to see more engaging mechanics like this, as the point-and-click gameplay can only keep my interest for so long. The story and eclectic cast of characters help, but ultimately it was my hand in solving the mysteries before me that I found the most interesting.

A Faithful Style With a Unique Artistic Twist

Chicken Police - Paint It RED! offers a strong and unique art style in the form of the black and white color palette you would expect, paired with photo realistic animal heads and associated body parts like tails jutting out from clothing like dresses.
It’s not a combination you would expect, but it works quite well. The fact that the game’s delivery is dead serious makes it feel like less of a joke and more of an intentional choice. There’s also a codex that fleshes out what this world filled with humanoid animals is like beyond the events of the game, which makes the combination feel more and more solidified as time goes on.

Of course, a noir story would be nothing without melancholic and stylish music, and Chicken Police - Paint It RED! brings this to the table as well. A low key soundtrack filled with jazzy piano, light percussion, and soothing brass all contributes to the game’s sense of style and confidence, which really worked for me.

Fans of quirky point-and-click adventures, classic noir, or mysteries in general should really take a look at this one. Chicken Police is one-of-a-kind.

A copy of Chicken Police - Paint it RED! was provided to PS4 Experts for review purposes.