Through a clever combination of art, voice acting, and some light gameplay, the visual novel genre has grown a lot on the PS4. Some of the finest stories I’ve experienced as a gamer have come in the form of these enhanced novels that take advantage of gaming technology to become more than text on a page.

Set in the Science Adventure series made by 5pb Games and Nitroplus, Chaos;Child is set in the same world as incredible stories like Steins;Gate. Does this new visual novel grab your attention with a dark and delirious murder mystery, or does it take too long to get to the good stuff, and lose your interest along the way?

Chaos;Child is set in Shibuya six years after a massive earthquake that shook the very pillars of society in Japan. The opening scene with a livestreamer seems pretty standard, but things quickly take a very dark and gory turn. As someone who has played his fair share of visual novels and murder mysteries, the opening events here were enough to thoroughly shock me.

From here, the story spends time introducing us to the main characters. They are all students who are members of their high school’s newspaper club. With the sudden gruesome death, our main character, Takuru Miyashiro leaps into action. With a new mystery to tackle, he wastes no time in beginning his investigation.

While they all have their reasons and varying levels of enthusiasm, the members of the newspaper club band together to try and solve the ongoing mystery. The first death is quickly joined by several others that seem to mimic killings from several years ago. While the visuals are certainly convincing, it’s the detailed writing and imagery that really drives home the gruesome nature of the deaths.

While the opening is very strong, Chaos;Child has a story that moves at a slower pace than I would have liked. It spends a lot of time between major events developing Takuru and his friends, or showing events from different perspectives.

These lulls between the major story beats are well done, but they go on a little too long. I’m all for character development and backstory, but oftentimes the conversations and descriptions outstay their welcome. It’s a testament to the quality of the overarching plot that I continued to push through each of these lulls eagerly awaiting the next revelation.

What is really interesting about Chaos;Child, is how it manages to be the sequel to something that was never officially released in North America, and a deep dive into modern technology and culture without ever feeling alien to newcomers like myself. While you can find fan translations of the original title, Chaos;Head, I didn’t ever feel like the game was holding back information from the previous title.

Even more impressive, is the extent that the game goes to ensure that none of its themes or jargon goes over your head. An in-game encyclopedia of sorts highlights specific terms and keywords in the text for you, allowing you to read detailed entries at any point in the pause menu.

These descriptors allow the story to dive deep into modern technology and Japanese culture without making newcomers to either one feel lost. I can only imagine the work that went into this codex, but it’s immensely appreciated.

Beyond the inconsistent pacing, I really enjoyed the story in Chaos;Child. Not only does its creative and gruesome mysteries help it stand out, but the standout characters and writing go a long way towards making the experience unique and interesting.

Another unique element at play, is the delusion system. At specific points in the story, you’ll be able to choose if you want the main character to have a positive or negative delusion. Sticking to reality is also a viable option.

Positive delusions often result in hilarious “what if” scenarios that are often awkward and sexual in nature. The negative delusions quickly turn towards dark and grim scenarios, which admittedly fit better into the game’s overall tone.

Your actions with these delusions do affect your overall perception of characters and events, which can lead to different endings. Other than that, they are purely optional. For some players, they may be seen as unnecessary, but I enjoyed the mechanic as a means of controlling how certain scenes played out in the character’s head.

I did notice a few typos and some spacing issues in the game’s text, but other than that I thought the translation was well done, and the writing very sharp. It can be long-winded, even for a visual novel, but there’s no denying that when it works, it works. 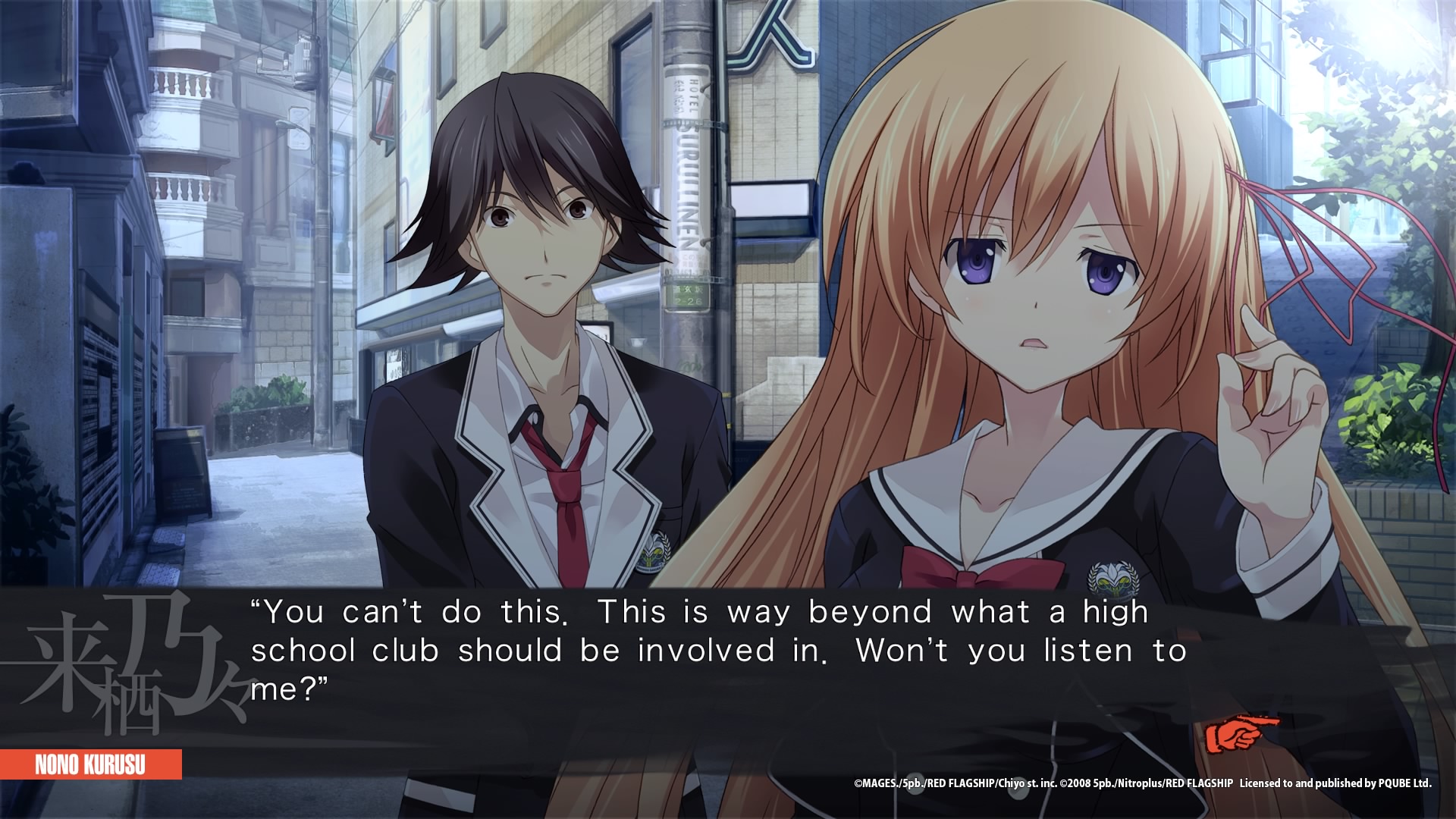 Chaos;Child embraces the concept of a visual novel and keeps things simple for you. You’ll progress text at your own pace, have the option to save whenever you like, and very rarely be asked to do much more than reading.

The delusion moments will require you to use the triggers (or the d-pad) to select the positive or negative option. Otherwise, you just leave it be if you want to stick to reality. There are also times when you’ll be tested and asked to select various crime scene photos or options to correctly answer a question.

Answering these correctly does tie to different endings, so it’s worth paying attention. Other than these small mechanics, the gameplay simply involves reading the text and pressing “X” to progress.

In a generation where visual novels tend to offer flashy investigative scenes or more complex gameplay, Chaos;Child sticks to its roots with a more traditional experience. This traditional approach only becomes an issue when the writing tends to drag on. Without gameplay to keep you busy during the slower moments, it can become tedious at times.

Despite this, I really enjoyed the relaxed and traditional visual novel experience that Chaos;Child provides. The delusion system kept things interested during some of the slower story moments, and the big beats never failed to impress. 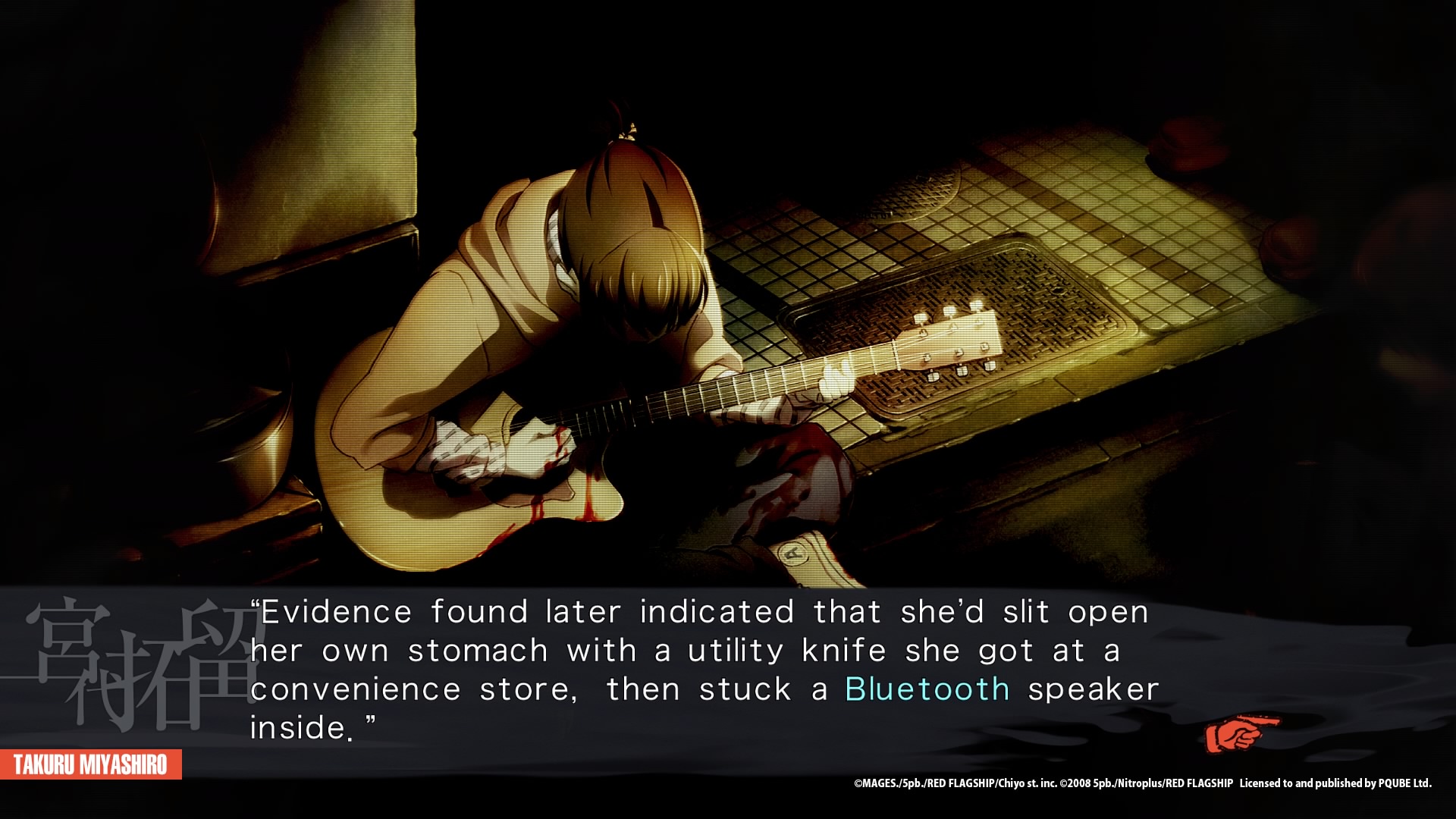 Much like the gameplay, the art in Chaos;Child plays it pretty safe with standard anime character models and backgrounds. The gruesome murder shots are most certainly creative, but the rest of the art assets are pretty standard.

Characters are expressive, with several poses and light lip sync to make them feel animated. The Japanese voice track is excellent, with very expressive performances and appropriate tone for each situation. Even as someone who doesn’t speak Japanese, I can absolutely appreciate the inflection and tone in the performances.

While Chaos;Child plays it pretty safe with the gameplay, only adding a few minor mechanics, it manages to stand out with some sharp writing and a unique story. Combine this with the clean and solid presentation, and this is a visual novel that does a great job of nailing the fundamentals.

It loses a little bit of its charm when the story starts to slow down and drag through specific scenes, but that doesn’t stop the rest of the experience from being interesting and enjoyable. Keep in mind that it is quite gruesome, so weak stomachs need not apply. If you’re a fan of traditional visual novels, however, this is an easy recommendation.

A copy of Chaos;Child was provided to PS4 Experts for review purposes. PS4 version was tested on a PS4 Pro.