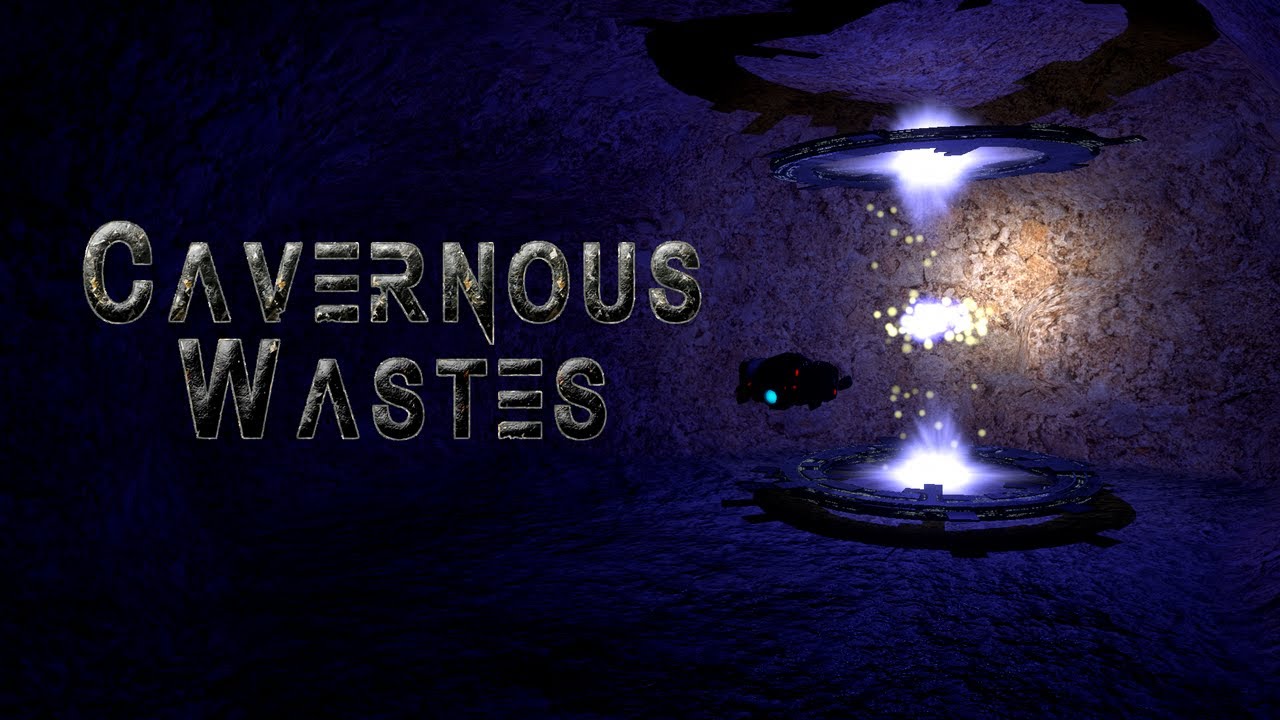 These days, it’s incredible what small teams can do on the PS4. Entire games have arisen as the passion projects of small indie teams consisting of only a few members total. What’s even more impressive, is when a game releases that was made by one, single, mortal, man. In this case, we have PouncingKitten Games and Cavernous Wastes for the PS4.

This game, playable both inside and outside of VR, tasks you with exploring the subterranean tunnels of an alien planet in the hopes of escaping with your life. Does it offer some spectacular spelunking for both VR and standard players alike, or is this cave a dead end? Let’s find out!

Cavernous Wastes throws you right into the thick of it. When you start the game, you can check out an in-game journal, but the entries are all locked to you. Your only choice is to dive in and see what the game has to offer.

As you play and progress, the journal entries begin coming in, albeit not in order. You’ll get bits and pieces at a time as you make more progress. There’s a lot of them to earn, so if you want the whole story, you’ll need to work at it.

Each of the journal entries are short, but well-written and do a good job of conveying slices of story without forcing you to read pages and pages of text. Since you have to pause the game to read them, this is a smart move.

It’s an interesting story to follow, but the real meat of the experience here is going to be the gameplay, especially if you’re a VR owner.

Cavernous Wastes throws you directly into a series of underground mazes. Since they are procedurally generated, no two runs will ever be the same. Your ship moves with a relative ease through the tunnels, but the controls can feel a little floaty, no pun intended. Your ship drifts a little more than you would think when you try to stop, especially if you use the boost.

Bumping into any surface will damage you, so using your boost is rarely advised. You can also rotate your ship using the R1 and L1 buttons. In terms of flight experiences, it’s not bad at all, but it will take some getting used to before you’re able to move deftly through the game’s environments.

Despite being procedurally generated, each level does manage to have its own unique feel. This is due to the verticality that some of them incorporate. While tunnels will stretch out before you in different directions, you’ll also find gaping holes in the floor or ceiling that lead to another part of the level.

Teleporters signal the end of a floor, which allows you to explore to your heart’s content before you fly into it and head to the next area. Hitting the touchpad will also bring up a map you can reference. It would have been nice to have this map on your HUD, only because it’s extremely easy to get lost, so you’ll be referring to it pretty constantly and closing it before you move on.

Glowing crystals offer the occasional drop when shot, and can be used to illuminate your path if you turn off your flashlight. When it comes time to fight enemies, you’ll find a small range of mechanical enemies to choose from.

Some fly, others are stationary. You start with three weapons: a cannon, dual laser beams, and a limited amount of missiles. The enemies aren’t particularly cunning, but they do provide a challenge, especially on later levels.

Randomized powerups can be found in the levels as well, which look like playing cards. Some make noticeable changes to your weapon power, while others can be a detriment to your progress. The risk/reward here is interesting, and makes each run feel unique.

Playing Cavernous Wastes on a standard TV is a perfectly playable and enjoyable experience, but the game truly shines in VR. The claustrophobic nature of the game's tight tunnels, juxtaposed with the yawning caverns comes through splendidly in VR.

In either case, the game’s welcoming price tag ($10), means that fans of procedurally generated games that encourage multiple runs or speed runs won’t be disappointed. If you own VR and you’re even slightly interested, it’s a no-brainer. VR shines in this scenario, especially if you want that feel of truly exploring dark subterranean tunnels.

I will say that the full movement of the game can and will push your motion sickness tolerance to the limits. Some people, myself included, prefer VR games where there’s not limits to the gameplay for the sake of comfort, but for those who are easy queasy, Cavernous Wastes will probably be something you play outside of VR primarily.

Presentation That Depends on Perspective

Cavernous Wastes has a pretty simple and clean-cut design to the graphics. The caves themselves use a similar texture for each level, with variations in color, size, and shape. The cockpit itself is also very basic, only providing the visual information you need.

The enemies are all pretty basic as well, but we have to keep in mind here that this was made by one person. Given that, it’s an excellent presentation when you consider the price point and the size of the team.

The weapon sound effects are a little underwhelming, but the soundtrack has a nice ambiance to it, so there’s definitely a give-and-take in the presentation department. Taking everything into account, though, I can’t deny that I had fun playing Cavernous Wastes.

It can certainly get repetitive, and it’s not something to play for hours on end, but it’s clean design and focused approach makes it a great game to jump in and out of when you’re looking for something quick to play. For VR owners, if you can stomach the full movement, it’s an easy buy for $10. For everyone else, I’d still recommend checking it out to support a clearly talented indie developer.

Whether you’re playing to escape, or just to see what new caverns will reveal themselves to you, Cavernous Wastes definitely deserves some of your spelunking time.