While there are many games that use the “simulator” concept lightly, Bus Simulator was one of those games that gave you a nice balance between realistic simulation and some hilarious quips from your passengers as you built up a transportation company. Now we have Bus Simulator: Official Map Extension, which is the game’s first major DLC that adds an entirely new region to your map to the south of the main areas.

This new spot includes two population centers, an airport, and plenty of picturesque highways to break up the usual city driving from the main game. Does this DLC, in combination with updates since launch, make this game a must-have for bus driving enthusiasts, or should you just call an Uber instead? Let’s find out.

A Refreshing Set of New Areas and Challenges

The Official Map Extension for Bus Simulator is unlocked in the story mode once you’ve finished the game’s main missions, and offers more challenges for you to overcome once it’s available. Another option is to check it out in the game’s sandbox mode once you hit level 8 with your other main company.

As part of the expansion we also get 20 new bus stops across the aforementioned population centers, mountain roads, coastal highways, and an airport. The size of the new era is no slouch at all, and just driving routes within these new areas can last just as long or longer than some of the longer routes in the main area.

Connecting this new area to one of the main hubs also opens up opportunities for some long-range driving that really helps Bus Simulator open up and breathe. Those who like their trucking simulators will appreciate all of this new space.

There’s a really nice mix of road types across the Official Map Extension too. Kerststadt, one of the new population hubs, feels like a modern Silicon Valley type area, with plenty of modern structures and tight turns to test your abilities. This side of the new map also offers some stretches of highway that take you along the coast or into tunnels for some great visual variety and gameplay that feels unique from the rest of the world.

A quick stop at the airport is always fun, with multiple bus stop areas to consider when you’re pulling up the terminal. Then you have the mountain village of Sonnstein, which requires you to navigate winding mountain roads both to and from the area.

As someone who lives near the Blue Ridge Mountains, I really enjoyed the stretches of open highway and the challenge of getting a bus up and down mountain roads. It felt like a slice of home in the best way possible.

It’s funny, because I liked Bus Simulator at launch just fine, but it was a little rough around the edges. From a performance standpoint, the coming back to the game for this Official Map Extension showed me that all of the recent patches did a great job tuning up some of the cracks in the armor.

There are still a few qualms I have with the presentation, which we’ll discuss shortly, but performance-wise, the game feels a lot better now on PS4 Pro than it did at launch. I didn’t run into any bugs either. In my initial time with the game, things like not being able to pick up garbage or lost items made it impossible for me to finish those tasks. Those weren’t an issue anymore, thankfully.

My Bus Driving Days are Far From Over 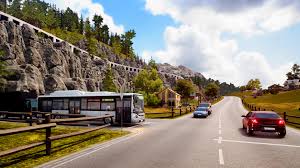 Bus Simulator: Official Map Extension is overall a great package with some excellent new areas, challenges, visual variety, and plenty of new potential routes to discover. I do wish it had added more options for weather like snow, but it feels like a natural progression of the game’s world.

That being said, elements of the presentation are still a little rough. While performance is much better, I still see character models repeat far too often when people get on and off the bus. Sometimes the exact person, in the same clothes, will get on. I can imagine that some of them are twins, but there’s a limit to that suspension of my disbelief.

The other issue is that far away scenery like mountains tend to pop in pretty egregiously when you’re driving. You’ll see half a mountain, then another chunk will load in, and then another. Even when it’s done loading in, the textures are quite blurry.

It’s not a huge deal, but it does hamper the immersion somewhat, especially during the day. If you’re driving at night, however, the lack of distance works in the game’s favor. The immediate areas look great bathed in the light of streetlamps. The airport in particular is very convincing at night.

For me, Bus Simulator is one of those games that feels really comforting right now. Driving around a town, full of life, free of the troubles surrounding us in the real world, is really nice. The people, with their quips about TV shows, leaving the door unlocked, or visiting the beach, all helped me feel a sense of stability that I don’t get in my daily life right now.

Once again, Bus Simulator has shown that, despite being a game about driving a bus around, it’s just as valid a form of escapism as any other title. In some ways, it’s better. There’s something peaceful about cruising down a mountain highway with the moon hanging in the sky. It’s peaceful, purposeful, and the routine of it all filled me with a sense of calm.

It sounds crazy, but there it is. If you already have Bus Simulator, I highly recommend grabbing the Official Map Extension. It’s a no-brainer. If you’re still thinking about getting into the bus driving business, the game feels stable and has a great selection of content with this DLC included, so now’s the time to pick it up.

We’re stuck inside in the real world, but with Bus Simulator you can get out there and build up a business while you’re at it.

A copy of Bus Simulator: Official Map Extension was provided to PS4 Experts for review purposes.