Strategy RPGs are a genre that requires dedication, focus, and the ability to think three steps ahead. It’s not for everyone, but for those who can get into the mindset of a digital chess match, there are few things more rewarding than the taste of victory after a hard-fought battle.

Brigandine: The Legend of Runersia brings this classic PS1 series to the U.S. for the first time, offering a new entry that combines strategy RPG gameplay with a high-stakes story and a monster summoning mechanic to lay the framework for a fantasy epic. Does it all hold up in motion? Let’s find out!

Choose Your House, and Ride into Battle

Brigandine: The Legend of Runersia takes place on the continent of Runersia, a place where mana has flowed freely thanks to a deity known as the Rune God. The power of mana allows humans to wield powerful magics and summon monsters to their side to aid them in battle. The people capable of doing this are known throughout the land as Rune Knights.

Five mana stones belong to five kingdoms across Runersia, with a sixth kingdom devoid of this power. The power of these stones is embedded into the armor the Rune Knights wear, which is known as Brigandines.

With those terms defined, Brigandine: The Legend of Runersia allows you to choose which of these kingdoms you will control over the course of the campaign. Each one brings their own story, which is quite in-depth and features gorgeous hand-drawn scenes. The only option for exposition is Japanese voice acting with English text, so it does require a lot of reading. As someone who enjoys visual novels, this didn’t bother me, but it’s worth noting.

For my first playthrough, I opted for the United Islands of Mirelva, with their pirate flair and leader, Stella Hamett, who is herself descended from a great pirate, their story of conquest away from their islands on the south side of the continent was a great way to get me invested in the overall power struggle.

While some of the side characters were less interesting to me, I will say that the quality of the storytelling across each of the kingdoms offers excellent replay value and provided more depth to their individual stories than I expected, which was a nice surprise.

Before we discuss gameplay, it’s also worth mentioning that Brigandine: The Legend of Runersia received a substantial update at launch with free content, known as the “Titans and the Iron Front” update, which you can see a trailer for below:

Having played with and without this substantial update, I will say that the addition of UI adjustments and a custom difficulty greatly benefits the game overall. I would make sure to download this free update prior to playing. The custom difficulty in particular allows for a wider range of skill sets to enjoy the experience. It also lets you crank up the difficulty if you find the presets to be too forgiving.

Gameplay in Brigandine: The Legend of Runersia spans across years of time, with each turn, or “season” divided into three phases. Twenty-four seasons make up a year. The presets for difficulty allow for between 2.5 and 5 years to accomplish your goal of conquest across the continent.

At the beginning of each season, you’ll start with the organization phase. This is where you’ll be wandering through menus and setting commands for your knights. It is in this phase you’ll also spend mana to summon monsters and assign them to knights accordingly.

Mana is earned at the beginning of each season, but a portion of it is dedicated to the maintenance of your current monster stable, so you’ll need to keep your spending in check. It’s also important to consider element types and keep your team varied for any type of enemy.

Both monsters and rune knights will earn XP from battle and level up in their current class. To make things even more interesting, you can change classes as well to meet your needs. If you can spare the troops, this is also the phase to send spare knights out on quests which will pull them from your ranks, but offer special rewards that range from equipment to resurrection stones that can bring back monsters which are otherwise gone.

When the attack phase begins, you’ll need to balance between a strategic push into enemy territory and defending your own bases. A handy comparison between power levels lets you decide if an offensive move is a good idea before you commit, which I appreciated.

Finally, the battle phase pulls you into classic turn-based strategy combat. A hex-based map is divided into various types of terrain, which play a factor by providing buffs or debuffs based on the affinity of your monsters. Again, you’ll see this when you plan movements so you can decide how to progress.

Battles can last up to twelve turns, but things usually come to a conclusion before then. I’ve had enemies decide to flee when they knew they were going to lose, and I myself have been summarily slaughtered to the point where I had no choice but to flee. Another nice thing to note is that attacks on enemies will show a summary before you commit to give you an idea of how the decision will play out.

Taking some of this pressure to think on the fly off the player allows you to keep your head in the battle, which is something I love to see. When the various fights have ended from both your side and the movements of the AI kingdoms, the season ends and the loop starts anew.

Brigandine: The Legend of Runersia is one of those games that doesn’t reinvent the wheel, but it does bring a lot to the table that makes it a capable entry into the genre. The launch update also allows for excellent flexibility in the difficulty, which opens up the experience to more players.

I don’t think it’s going to win over anyone who doesn’t typically like the genre, but for those who love a good tactics game, Brigandine: The Legend of Runersia has just about everything you’re looking for. 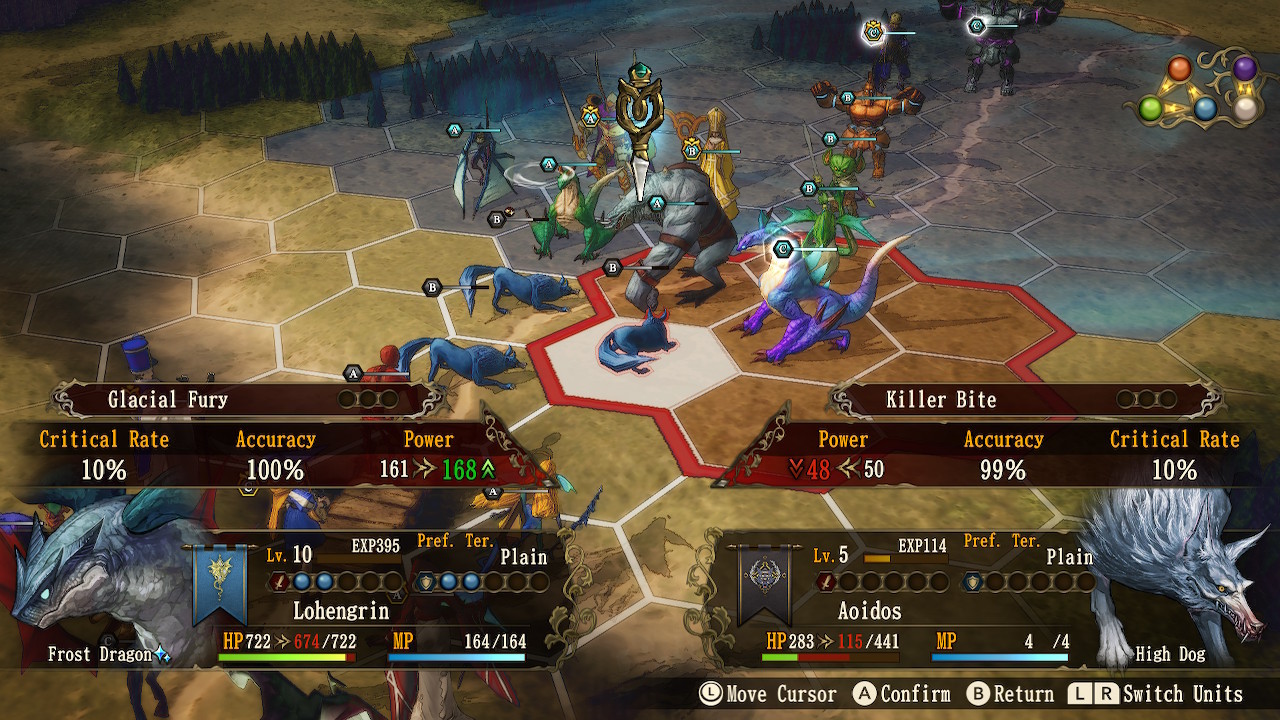 Brigandine: The Legend of Runersia is a game that can be both gorgeous and dated in the span of a single season. The character portraits, story segments, and monster designs are all excellent and detailed. However, the menus, the battlefields, and the animations are all simplistic and even dated. It does give the game a nostalgic feel, harkening back to the early days of tactics RPGs, but it also doesn’t make the experience feel extremely new overall.

Your mileage will vary, as some may prefer the classic look and feel, but regardless of presentation, there’s no denying that Brigandine: The Legend of Runersia is a solid strategy RPG with plenty of content for fans of the genre to sink their teeth into.

A copy of Brigandine: The Legend of Runersia was provided to PS4 Experts for review purposes.